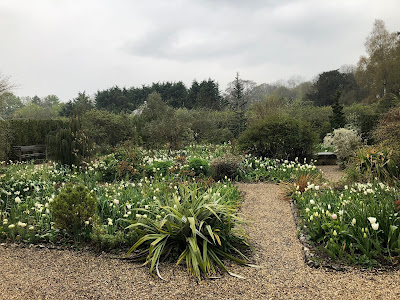 A new experience today: a visit to a private garden near Newbury which is open as part of the National Gardens Scheme. We arrived in light rain and, along with 20 or 30 others, started by hearing about the garden from the Head Gardener/Horticulturist, Mat Reese. He is highly regarded in the horticultural profession and has been at Malverleys for 10 years, working with the owner to create an ambitious garden, arranged in a series of separate 'rooms' and areas. He is not finished yet apparently, with further projects in mind.

After the introductory talk we were free to explore the garden (there was no guided tour because of Covid). We started in the impressively large walled garden (above) where the plantings were almost entirely white. In the centre were two  cherry trees housed in purpose-built open pagodas. We had never seen anything like this before - very striking!

We went next to a smaller, but exquisite, walled Italian garden where a cherry tree avenue  bordered a rill with a neoclassical statue at the end. This was a real delight and very popular with the other visitors. I had to sneak back when they had all gone to get a decent photograph 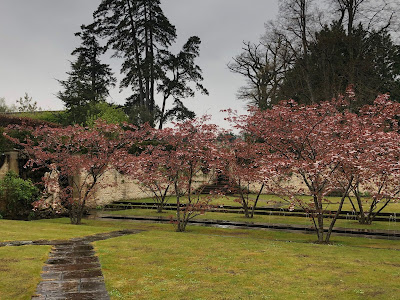 At right angles to this room was another which offered a beautiful view towards the statue. 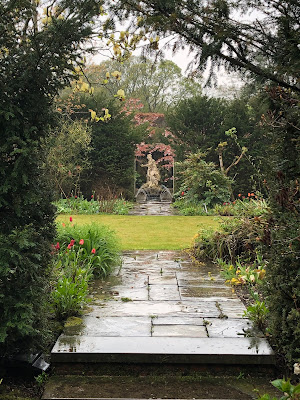 Next, the cool garden, was another real show-stopper, this beautifully proportioned circular pool with an exquisite metal bowl in the centre aligned with a Greek urn on a pedestal. 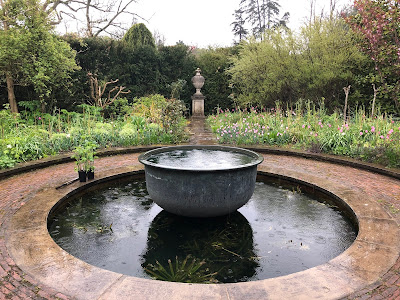 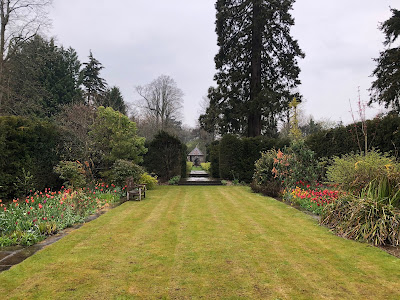 We ended our exploration near the main house - we were told not to publish any pictures of the house, a request which I naturally complied with. I thought a snapshot of the newish family chapel would be OK though. 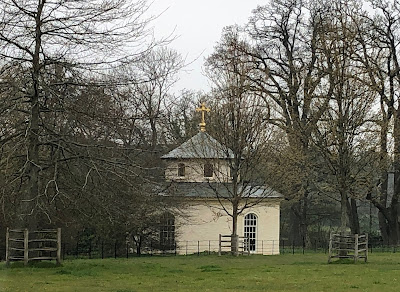 Rating: 5 stars. A marvellous way to spend a couple of hours. I would love to come back again in the summer to see the gardens in a different season.