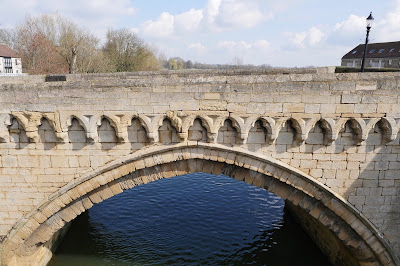 We are on the way back home from a dinner in Cambridge and it seemed to be an excellent opportunity to detour slightly for a look around Peterborough. It is a town of Saxon origin and gained a Royal Charter in 1205.

We started at the 19th century Riverside mill and crossed the medieval  which dates from about 1332. There was apparently a rivalry between the two towns (Godmanchester was the more important in Roman times) and there are differences in the cutwaters between the Peterborough side and the Godmanchester side. Two of the six arches on the Peterborough side are beautifully decorated and one of them is shown above.

We passed the Old Bridge Hotel and turned left into Castle Moat Road. On the left was a mound which was once the site of Huntingdon Castle, built in 1068. A little further on, on the right, are the St John's Almshouses, built 1843-51 and upgraded in 2011. The central double gable is an unusual feature. 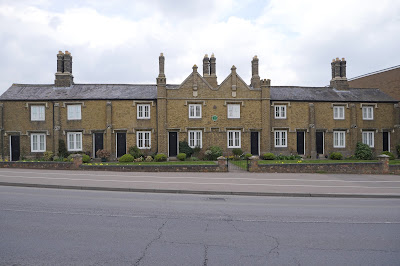 We retraced our steps and turned left into the long High St. soon reaching Castle Hill House, a fine Georgian mansion of 1787. 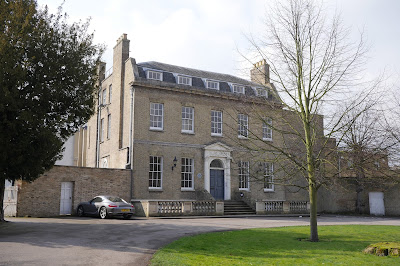 Opposite is St Mary's church, dating from Saxon times but mainly 13th century. The tower was rebuilt 1608-20 and is approached by a very pleasant flower-lined path. 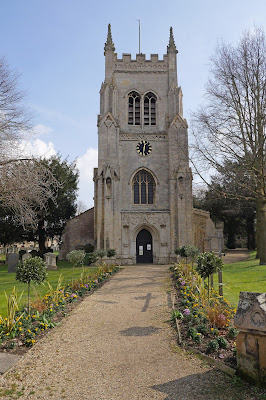 There were some attractive Georgian town houses on the left hand side as we approached the town centre, but we especially enjoyed the Commemoration Hall (1842). 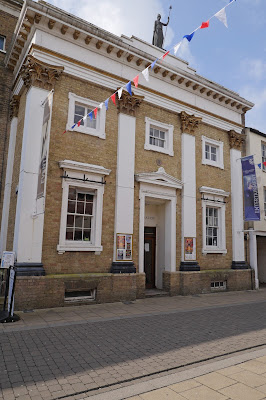 Soon afterwards we arrived at the spacious Market Hill, the centre of the town. On the left was the Town Hall of 1745. 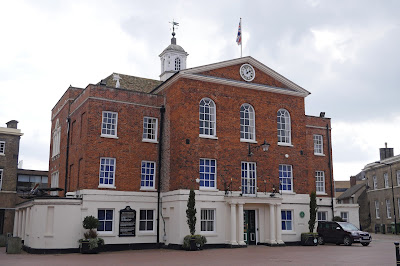 On the right was a rather incongruous Sopwith Camel (presumably a replica). Some of these WW1 planes were apparently made nearby.

Continuing the war time theme, in the centre of the square is the ‘Thinking Soldier’ a rather fine war memorial sculpted by Kathleen Scott, the widow of Scott of the Antarctic. 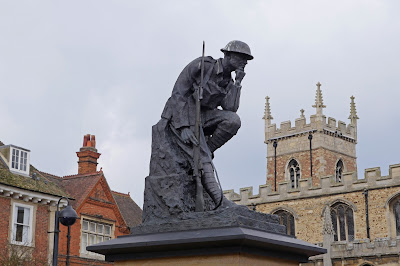 Continuing round the square we come to All Saints Church, medieval but with many later alterations and additions. These include a font in which Oliver Cromwell was allegedly baptised - he was certainly born and brought up in Huntingdon. 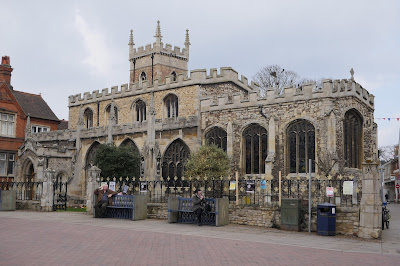 Finally, there is the very interesting building which now houses the Cromwell Museum. 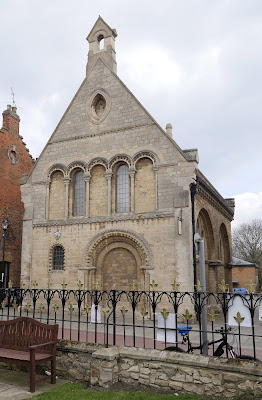 It was originally the infirmary hall of the Hospital of John the Baptist. This was later much reduced in size and then became a school. It was rebuilt in the later 19th century century, but remains a very characterful building.

We continued up the High St passing the imposing George Hotel, once a coaching inn. 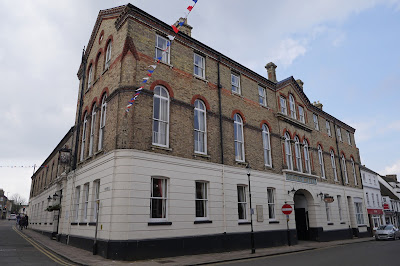 On the right we admired this keystone on a bank window. 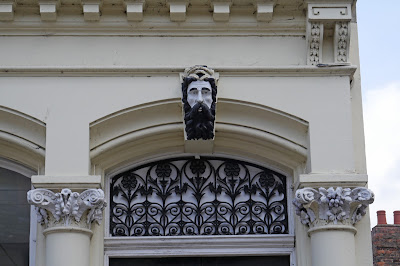 At the top was the splendid Whitwell House of 1727. 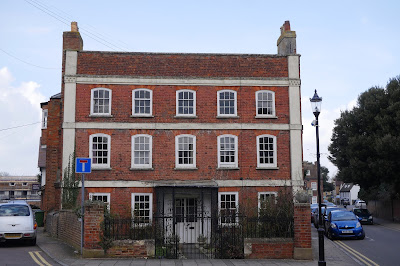 The only drawback with this exploration was there was nothing for it but to retrace our steps. Huntingdon was historically a linear town.

Distance: about 3 miles there and back.