We started this lovely walk from the old quarry car park just above Kimmeridge.  We headed eastwards along a road and quickly turned right along a farm track which led all the way to Swyre Head. It was very hazy to seaward and it was some while before I could take any sort of reasonable photo. The picture below (best expanded by clicking on it) extends from the Clavell Tower on the extreme left to Warbarrow on the right. In the middle ground is the village of Kimmeridge. 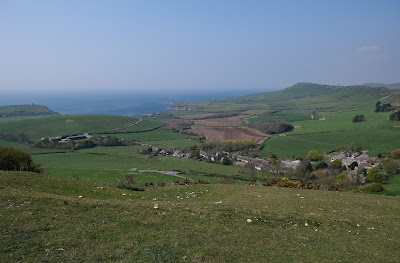 After a while we could see Smedmore House in the valley between the ridge and the Coast Path. 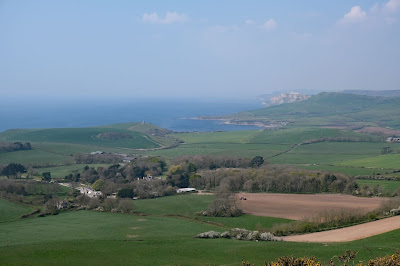 Quite soon after this Swyre Head loomed ahead. It is the highest point in the Purbeck Hills at 98 metres. 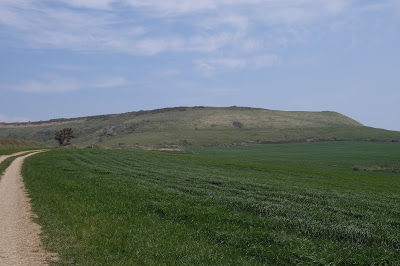 When we reached Swyre Head we were pleased to discover that since our last visit many years ago a Permissive Path had been mapped out. Previously it had been a contentious issue and we had ended up on one occasion having to walk back along the farm tracks.

From the top of Swyre Head there was a fine view to the east as far as St Aldhelm's Head. 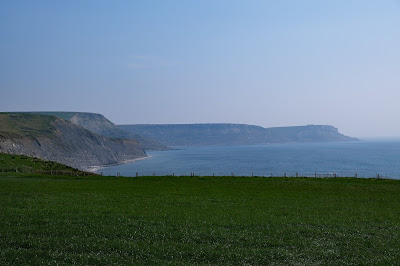 We descended and reached the coast at Rope Lake Head, turning right along the Coast Path. It occupies a fairly narrow strip of long between the fences which demarcate the fields and the cliff edge. We were struck by the amount of evidence of erosion, including one point where it seemed that part of the path had fallen away quite recently. In other places the fence line had been moved inland by several feet - and it seemed that more of this was becoming necessary.

We were particularly struck by the way the cliffs were eroding at an angle from the top. 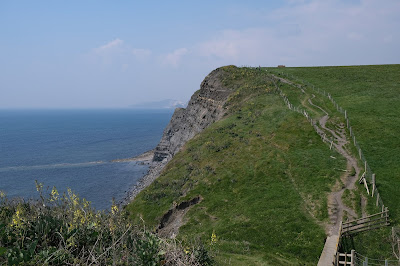 As we neared Kimmeridge Bay, we encountered again the delightful folly known as the Clavell Tower. It was built in about 1820 and was spectacularly dismantled in 2005 and moved 80 ft away from the cliff edge because erosion of the cliff was threatening its survival. It is now owned by the Landmark Trust and available as a two-bedroomed holiday let. 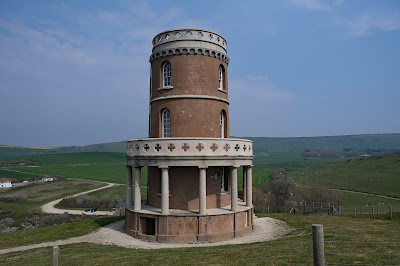 We continued past the Tower and headed into Kimmeridge Bay. The rock ledges which it is famous for were below water. 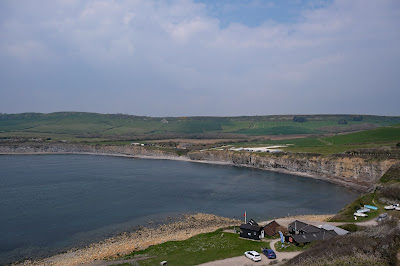 We then walked inland and through the pretty village of thatched houses, pausing to enjoy some ice cream at the village restaurant. 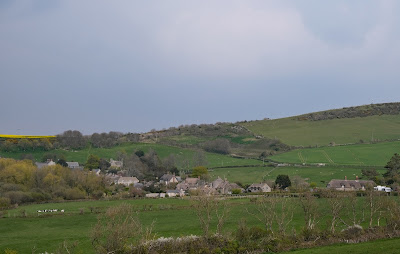 We had hoped to visit the The Etches Collection, Museum of Jurassic Marine Life - especially fossils - but unfortunately it was closed. The planned reopening is May 17 2021. It remained only to climb a steep path passing between the church and rectory and then uphill across a grassy field to return to the Quarry.