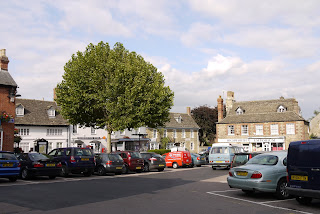 I was in the area on business and decided to do a walk I had previously noticed on the Walkingworld website. It starts from the charming Market Place of Highworth, a quiet town with a Georgian ambiance.

I had a look at the 13th century St Michael's church, tucked away in a cathedral-like close to one side of the High St. 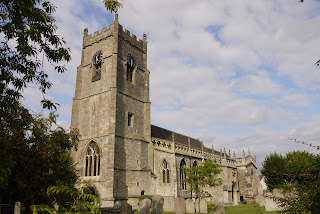 From here the route continued along the High Street, past the leisure centre and through a golf course to finally escape the town. I chap I chatted to on the golf course mentioned that it was a fine place to spot Green Woodpeckers, but I failed to - we did see one in the garden recently however, which was a first.

The route now continued across fields over Red Down and passes a derelict wind pump, which acts as a useful landmark. You soon pass the site of what was clearly once a substantial deer farm. Now there are just some caged areas and a few desultory horses grazing. Why would a deer farm go bust? Too many wild ones available to be shot?

Now you reach the quiet village of Stanton Fitzwarren, a pleasant village with a handsome and, unusually, un-restored barn in the centre. 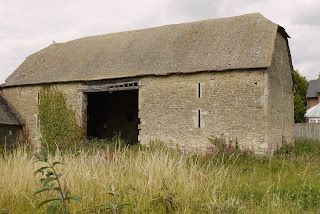 I made a short detour to see the church of St Leonard. Of Norman origin, it has been subject to the usual Victorian restoration. The tower however dates from 1631. 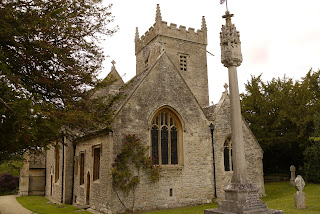 You leave the village and cross fields to reach the busy A361. Over the road a track leads to Queenlaines Farm which looked rather abandoned as I approached it. The farm buildings seem however to have been adapted for use as a school.

Soon afterwards you join the minor road which leads to Severnhampton, famous as the home and later burial place of Ian Fleming. This road offers nice views over the fields towards the Ridgeway. 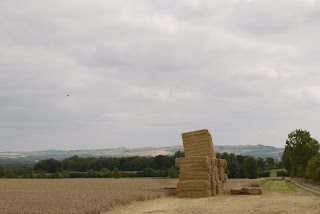 On entering Severnhampton, the route veers immediately away to the left, past a cricket pitch. The sight screens, nets, pavilion and score box were all in pretty poor shape, although the grass seemed to have been cut recently. 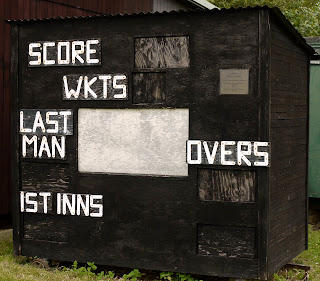 Now there was another golf course to negotiate - whoopee - followed by a field path past a derelict-looking farm house and a school playing field to return to Highworth.

Rating: two and half stars. Rather disappointing, with a curious air abandonment and decay. Strangely urban too - roads, playing fields, golf courses. Highworth was pleasant. 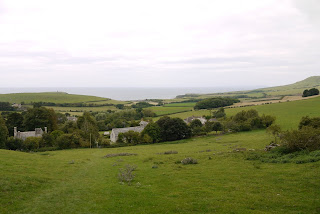 After another month's gap we continue our slow progress along the SW Coast Path. We decided to park on the cliff in Kimmeridge Bay, which would be the end point of the walk. This meant in effect repeating a walk from Kingston to Kimmeridge which we did in January - but in reverse and with a different starting point. We started therefore by walking inland up to an through Kimmeridge village, past the church and up the road. This offered increasingly fine view back over the village and the bay.
At this point we made a further climb up to the top of the steep ridge which overlooks Kimmeridge and more less follows the line of the coast to the east. The map shows this as Smedmore Hill and although the contour lines are hard to read, it is clearly about 200m above sea level - so a pretty decent climb from where we had started.

The views from the ridge were excellent, and as we neared Swyre Head there were also fine views inland to the north west. Here is Swyre Head, with the sea behind, seen from the ridge. 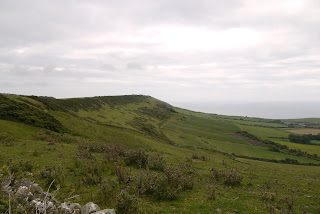 We had climbed Swyre Head (203m) on the previous leg of the Coast Path and on January's walk and we were rather looking forward to going down it for a change. It was indeed much easier, but still quite hard on the knees. However, the fine views to the west were a compensation. 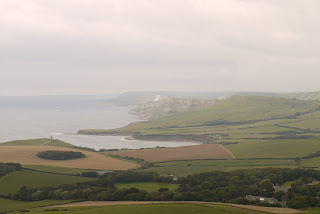 Having by now walked four miles, we started on the Coast Path itself. This is an undramatic section, with the Kimmeridge Ledges (limestone) being the most notable feature. 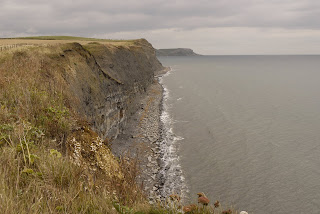 As we approached Kimmeridge, the Clavell Tower folly, the other highlight, presented itself for our inspection (its story is described in January's post). 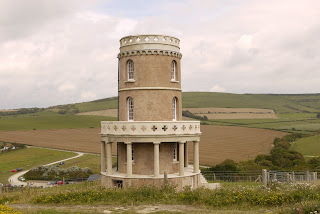 Just past the folly, you begin the descent to Kimmeridge Bay, with the westward continuation of the Smedmore Hill ridge in view behind it. 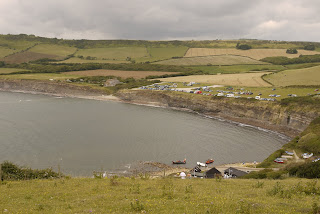 Distance: about 6 miles, of which only 2 were on the Coast path. Distance covered now 21 miles.

I think this lovely pink flower may be Red Soapwort, but I am not completely sure. I could not definitively locate it in my wild flower books. 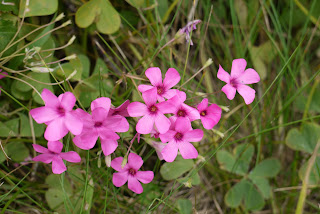 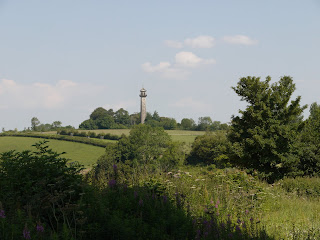 Looking back towards the Monument

We picked up the route of the Cotswold Way at the Monument at Hawkesley Upton having done 78 of the 102 miles. It may have taken us 18 months, but the end is in sight!

After a short stretch along the road the route turns right along a fine drive track - this particular one seemed to be the walking equivalent of a motorway, without the traffic. 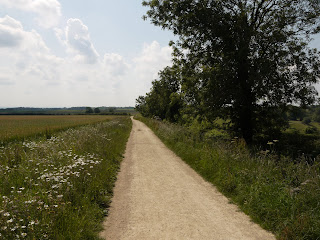 Soon, to the right there was a wonderful field of poppies, with other colours in front in a series of bands. 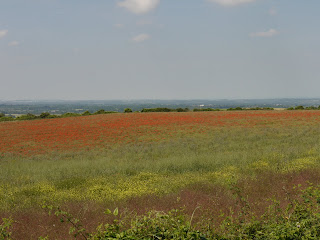 At the end of this, a grassy path passed above Horton Court, a National Trust property which has "fascinating remains of a 12th-century rectory, including a Norman hall and early renaissance decoration". The house is hidden behind the trees, but the church of St James the Elder can be glimpsed through them. The Perpendicular tower of this 14th century church created a fine sight. 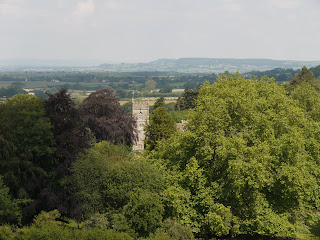 The route then descends into the village of Horton and climbs past the early 19th century Widden Hill House. Just past the house is a folly dating from the year 2000, built for the purpose of providing a nesting place for owls and swallows. It is rather lovely - and it is wonderful that the art of the folly has not been lost. 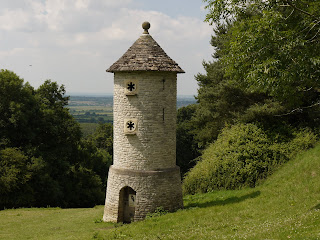 We headed on to Little Sodbury with the handsome Victorian church of St Adeline. We thought that this was an unusual name and it is apparently the only church dedicated to this obscure saint.

The route soon passes through a large, but mysteriously unnamed, Iron Age hill fort. A large outer earthwork and an inner one are very well preserved. Of the hill forts we have seen, this one was unusual in that it is on a plateau with a slope on one side, rather than a genuine hill.

The next port of call is Old Sodbury, notable for the late Norman church of St John the Baptist. It is an interesting, but not very imposing building. The restoration of 1858 probably did not help. 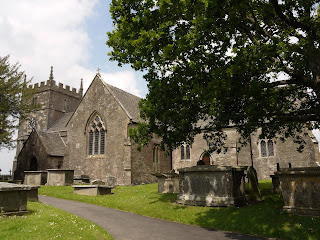 The path descends over a field into the village and soon enters Dodington Park. The grounds of 240 ha were laid out around 1764 by Capability Brown, although later modified, and the current neo-classical house was built by James Wyatt between 1798 and 1813 for Christopher Codrington.The house is now owned by the inventor James Dyson. 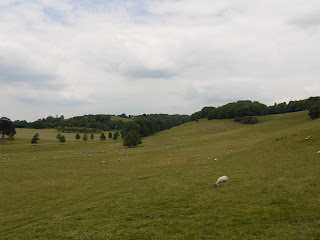 We loved the park but could not get even a glimpse of the house.

After a steep climb, we crossed the busy A46 and headed into Tormarton where we had an enjoyable late lunch at the Major's Retreat while watching the first couple of sets of the Wimbledon final, seeing Djokovic well on his way to victory over Nadal.

We saw a good number of butterflies, but this Scarlet Tiger moth, which fluttered out from its bush and then hid again, was the highlight. 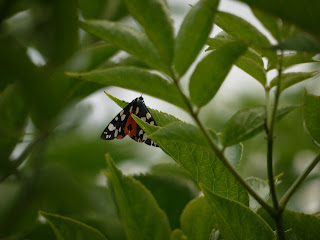 Mountains viewed from the plateau

The final day of our visit to the Alps and John took us to the Plateau de Salaison en route for the airport at Geneva. We left the autoroute at the bottom of the valley and made the long, but scenic climb to reach the plateau at 1512m. The couple of chalets in this picture are dwarfed by the hills behind. 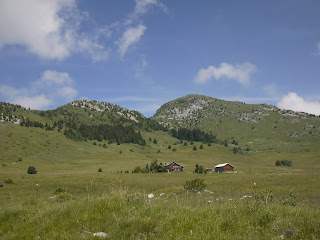 The scene is perhaps not quite as rural as it appears, because off the right the village boasts three or four restaurants.

We parked by the chalets and headed off across the grassy plateau with a plan to climb mont Leschaux opposite. 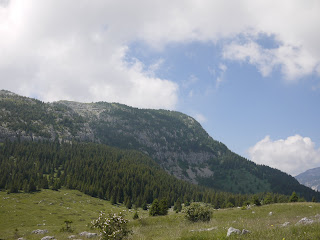 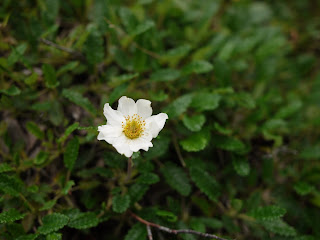 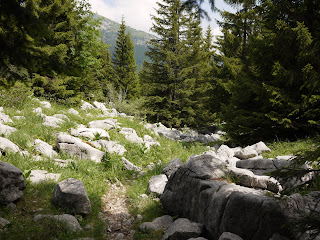 But after a while we hit a steep slope covered in scree. Going became slow and we wondered if we would have time to reach the top, make a safe descent and have lunch in time to catch a our plane. We concluded that a cautious approach would be most sensible and decided to retrace our steps.

We explored a little more of the grassy plateau and were delighted delighted to stumble on this perfect specimen of Nigrittella, to quote John "a classic of exposed turf slopes above about 1800 metres, a member of the orchid family". 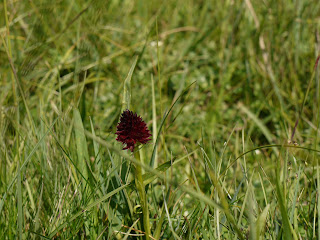 We followed the sensible course of going to the restaurant which had most cars parked outside, and enjoyed an excellent lunch. We made the plane comfortably, but unfortunately there was allegedly a surplus bag in the hold and so we had to all disembark for a rather chaotic process of reconciliation on the tarmac.

Distance: 3 miles or so.