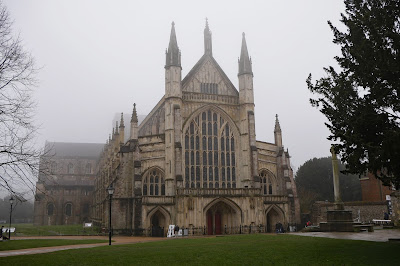 Last year was dominated by doing up our new house, but this year we intend to get back to normal life by doing some long distance paths. We decided we would start with the South Downs Way, 100 or so miles from Winchester to Eastbourne. The day we chose to get started turned out to be quite misty and the great Cathedral, consecrated in 1093, could not be seen clearly.

We headed around the south side of the church and had a wonderful view of the flying buttresses as we walked through them. 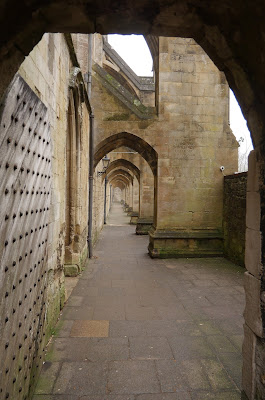 A little further on, if I have understood correctly, was the footprint of the original Saxon church, known as Old Minster. 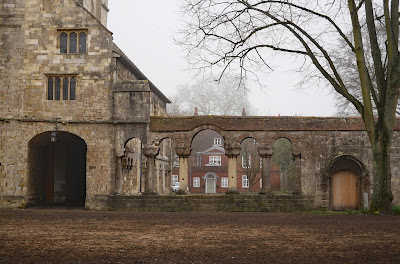 We passed a couple of fine old buildings ... 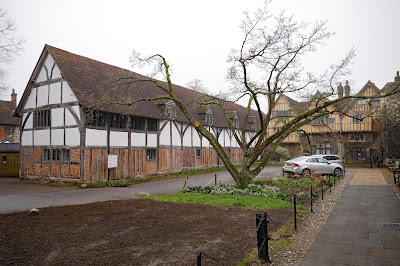 ... and left the Cathedral precinct by the Kingsgate. 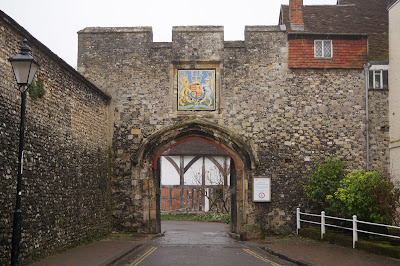 We passed Winchester College (I think the New Vaudeville Band were pupils there) and headed past the Bishop's Palace. Only the modern buildings could be clearly seen, but the medieval buildings could be glimpsed in the background. 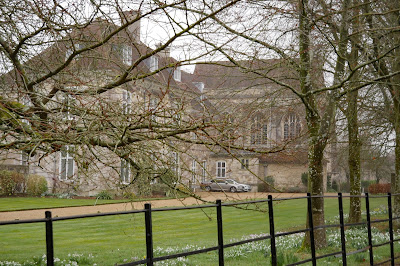 We managed to find our way out of Winchester (this seems to be generally regarded as the greatest navigational challenge on the South Downs Way) with only one slight detour and crossed a bridge over the busy M3. Almost immediately we were in the country, heading east along a field-edge path.

We reached the village of Chilcomb and began to climb steadily. As we reached the top we passed this delightful drift of snowdrops on a bank outside a house. 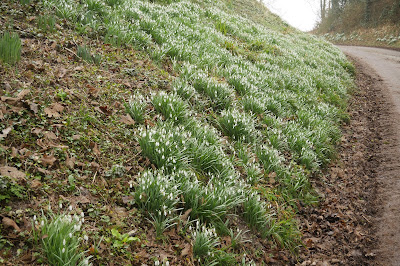 Further on the hedgerow was covered with Old Man's Beard. 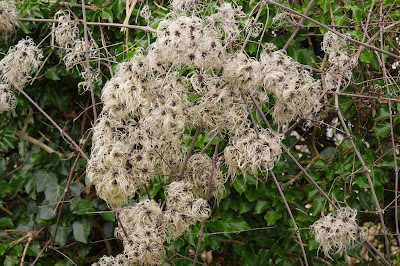 We passed under the top of Telegraph Hill (one of many of the same name) and crossed the busy A272 by Cheesefoot Head. This overlooks a large natural amphitheatre and a helpful information panel told how General Eisenhauer spoke to 100, 000 troops there just before D Day.

We could see even less now, but the narrow path through a clump of trees was pleasingly atmospheric. 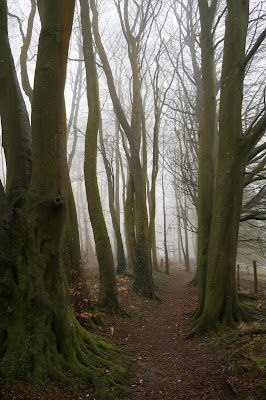 At the end of this we turned right onto a track called, rather grandly, Kings Way and followed this for a couple of miles to a point just near Cheriton. I tried to capture a few skeletal trees across the fields, but without great success. 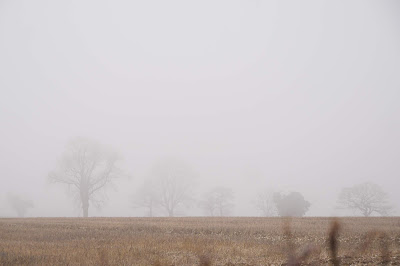 The only interesting development was when four black SUVs came from the opposite direction and roared past. We speculated inconclusively about their purpose and destination,

At this point, near Holden Farm, we decided the only sensible strategy was to detour to Cheriton and hope to summon a taxi to the pub there (the Flower Pots -  a nice village pub, very friendly and helpful customers and staff). This worked well and we were soon back in Winchester.

Distance: 6.5 miles along the SDW plus over a mile detour.