We are in Poole for a few days, starting with this interesting walk from the hamlet of Acton, between Langton Matravers and Worth Matravers.

We parked just off the main road and walked down through the village to reach the Priest's Way. This turns out to be one of the shortest signposted paths we have ever encountered: it starts in Swanage and finishes on the edge of Worth Matravers just three miles later.

We headed west between drystone walls, passing through a quarry and then detouring via a signposted gate to visit the site of the Dinosaurs' footprints. Quarrying on this area revealed several depressions in the rock which have been identified as those of Brachiosaurus, a member of the Sauropod family of dinosaurs. I took some photos of the footprints, but somehow managed to delete them! Here at least is an impression of what a Brachiosaurus would have looked like. 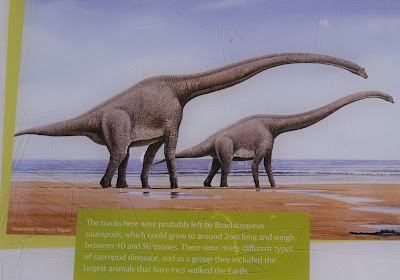 We continued along the Priest's Way to reach Worth Matravers which gave us our first view of the sea between the twin hills of East Man and West Man. 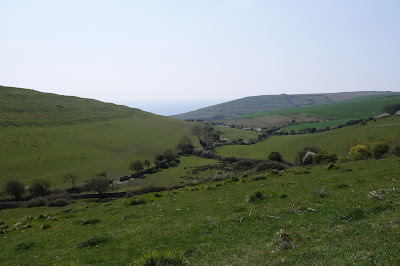 We continued past the pub (the white building on the right in the picture below) and looped round through the village to double back across the valley. 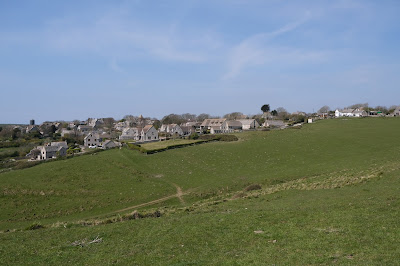 Reaching East Man we made our way downhill to reach the South West Coast Path. Here is the splendid view with Seacombe in the foreground. 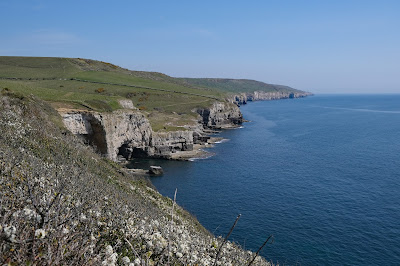 We followed the path above the cliffs noting how much this section of coast has been influenced by quarrying. Apparently it goes back as far as the Roman occupation. So far as I can can discover, quarrying at Winspit (below West Man) ended in 1952 and this was the last of the Isle of Purbeck cliff quarries. Quarrying on Portland continued for at least another 30 years.

This is the fine view looking back as we neared the wonderfully named Dancing Ledge. 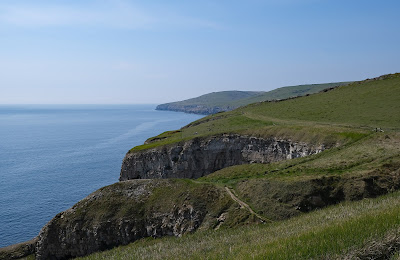 And here is Dancing Ledge. 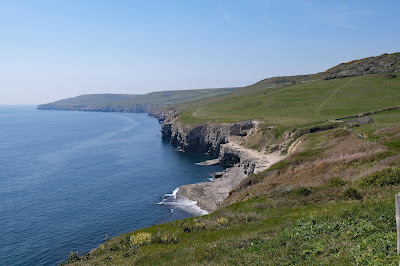 When we first came this way in 2011, we did actually pause on the ledge to do a few jive moves. It felt wonderful! According to Wikipedia: "Dancing Ledge is so called because at certain stages of the tide when the waves wash over the horizontal surface, the surface undulations cause the water to bob about making the ledge appear to dance". It sounds like a just-so story to me.

We now headed inland, climbing quite steeply and having a bit of difficulty finding the right track. We observed the direction a few other walkers were coming from and followed their line in reverse, soon reaching Spyway Barn and not long after that , the Priest's Way.

On the way we spotted these Cowslips, the first of the year. 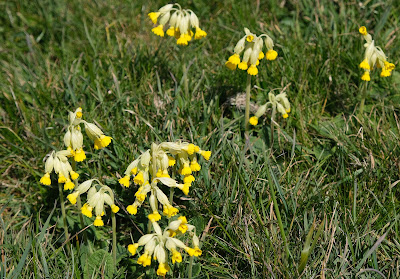 We continued a short way along the Priest's Way and then turned right to retrace our steps through Acton to reach the car.

Rating: four stars. Wonderful to be on the Purbeck Coast again.