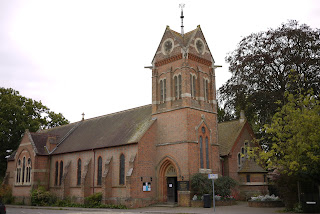 In May I did a Mystery Walk for the Ramblers around Beech Hill. This is part of a project in which members are asked to walk two miles of path in a given grid square and then rate the walk along a number of dimensions. The resulting data enables an overall assessment of the performance of local authorities. The first report is available on the Ramblers website and the headline message is quite encouraging. I naturally volunteered to do another and was assigned grid square SU6565, just north of Mortimer.

I started by walk in the car park in front of St John's church in Mortimer and headed north along teh side of the recreation ground, and then through woodland (which marked the start of the Mystery element) to reach Bridge's Farm.

After a short stretch of road, I continued northwards through Starvale Woods, already beginning to look autumnal as the bracken dies down. 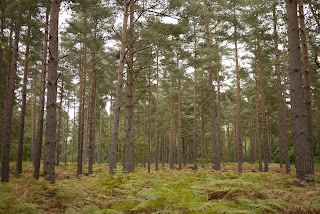 This gives way to the quite similar Wokefield Common (in fact more woodland). At the edge of Burghfield Common, I turned back at an acute angle to emerge from the woods and walk along Lockram Rd.

Here I turned right and headed south across a series of ploughed fields in welcome open country, with a few gentle hills to provide variety. 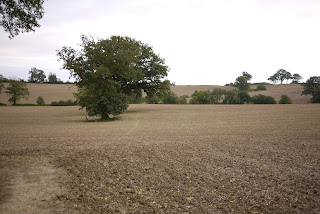 Wokefield Park, an extensively modernised Georgian house, now a conference centre, provided a view to the east. At Wheat's Farm I turned west, back to the start.

I gave it the highest possible Mystery Walking ratings, as the signposting, waymarking and condition of the paths were all exemplary. Well done West Berkshire Council!

I was quite pleased with the ease with which I designed the route and then followed it in the map. My skills in these areas must finally be improving. I have had some practice on the South West Coast Path, although it must be acknowledged that the presence of the sea makes the whole thing so much easier.


Flower of the day

Not many flowers about of course, but this, I think, Oxeye Daisy caught my eye. I have sometimes had trouble getting a good photo of mainly white flowers, but this one came out quite well. 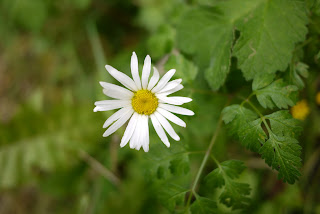 The Cotswold Way: A review

The Cotswold Way runs for 102 miles from Chipping Camden to Bath. It was originally developed as a long-distance footpath in 1970, and was formally launched as a National Trail in 2007, with some changes to the route.

I have described our experiences of walking the Cotswold Way in a number of postings (listed below). It now seems time to stand back and offer some reflections. I will divide them into two broad categories: our experience of walking the Way and the route itself. Reviewing the route also identifies a number of places we would like to go back to and investigate further.

We agreed that it had been a good idea! The things that the four of us liked were many and varied: wonderful views, friendly people (especially the guy who brought us tea near Birdlip), appreciating how the geography fits together, hospitable pubs, deepening our friendship, little villages, discovering new places on our own doorstep, not too many golf courses, good signposting, great fun, variety, catching up with each other's news, working out the ramifications of the two-car model, learning about butterflies, learning about geology, the miraculous weather, finding that we were all up to it, taking photos, the way it managed to be in country right to the end, how we got fitter and increased our expectations of what we could do.

It was a good move to go from Chipping Camden to Bath. It felt a better place to end up.

We all felt our guide book had been a great help. It took some getting used to, but once mastered was invaluable. The Cotswold Way by Tricia and Bob Hayne (Trailblazer Publications, 2009).

The route follows the edge of the Cotswold escarpment virtually all the way, so there was a long series of fantastic views off to our right. Some personal highlights were views from Wistley Hill, Crickley Hill, Ring Hill / Haresfield Hill and Cam Long Down. (These and other places mentioned can all be located using the search facility above.)

We also passed through many lovely towns and villages, notably Broadway, Painswick, Winchcombe, Wotton-under-Edge and Stanton.

We saw some lovely churches, of which All Saints at Selsley was perhaps our favourite for its Morris and Co stained glass. Hailes Abbey and its nearby church were also very special.

Other especially interesting buildings and structures were: Broadway Tower, the Tyndale Monument and the Market House at Dursley.

Throughout there was a great sense of history: from stone age barrows, to iron age hill forts and civil war and later battles.

And finally, there were many nice pubs, of which the Mount at Stanton was a particular favourite.


Places to go back to and explore properly 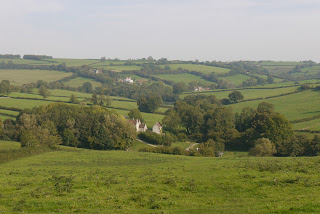 Looking back towards Cold Ashton

We started the Cotswold Way in April last year, and today we finally embarked on the last leg. We picked up the route at Cold Ashton and headed south west along a long through fields, slowly descending. After Liliput Farm we gradually climbed back up again to reach the site of the civil war battle of Lansdown, fought in July 1643. A series of plaques describe the evolution of the battle. It seems that, just as often happened in the American civil war, the two generals had been personal friends.

Near to one of the plaques was this stone image of a looting soldier, copied from a 17th century print. There are other similar images, which mark the battlefield way, beside the other plaques. Well done to Bath and North East Somerset Council. 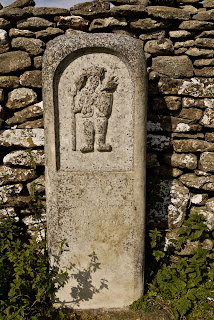 A little further on was a monument to Sir Bevil Grenville.  It was erected in 1720. The forward-facing side of the monument is in poor condition, but it looks well from the side. 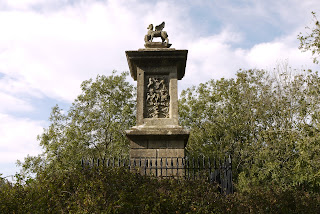 Sir Bevil was a royalist and the monument commemorates his heroism in the battle - in which he died - and that of his Cornish pikemen.  Apparently his men then refused to fight for any other officer and went home, carrying their leader's body.

A bit further on, at Hanging Hill, we started to get great views down towards Bristol to the west. 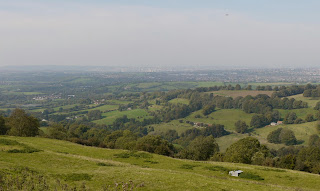 Now we skirted then crossed a golf course and then paused for a picnic lunch on a hillside overlooking Bath's northernmost suburb, Upper Weston. From here and for a while afterwards, as we followed the ridge towards Weston, Beckford's Tower could be seen on the opposite ridge. It was was designed by Henry  Goodridge and completed in 1827 for William Beckford (1760-1844). He used the tower as both a library and a retreat, located at the end of pleasure gardens called Beckford's Ride which ran from his house in Lansdown Crescent. Beckford previously had built the massive gothic revival house of Fonthill (architect James Wyatt), whose enormous spire collapsed soon after it was completed. Beckford had, wisely as it turned out, already sold it by then.

The route now passed behind Bath Racecourse and we could at last discover the source of the loud tannoy announcements we had been hearing for some time. We went past the Racecourse on the way home and established that the event concerned Agility, but of what we could not discover.

We walked through Weston and made an unwelcome climb to reach Summerhill Road, for the final descent into Bath from Sion Hill. We skirted the Royal Victoria Park and walked beneath the Royal Cresent, where many people were sunbathing on the grass in the surprising October heat. 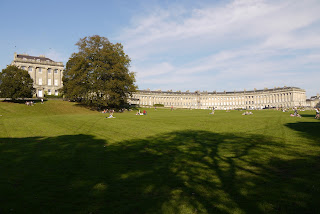 Finally, we reached the Abbey and the end of the walk. It was too crowded to take a photo of the Abbey to mark the occasion, so I am re-using this one from an excellent city walk we did there in December 2009. 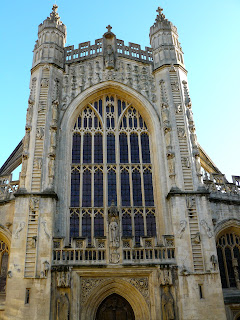