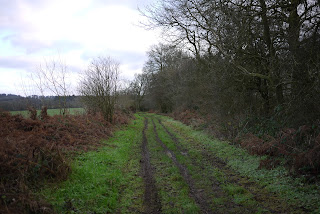 It was a lovely morning at home, with a bright blue sky, and it suddenly felt exactly right to do a bit more of the Wayfarer's Walk. Naturally, by the time I reached the start it was cloudy with a threat of rain. I picked up the route by Bunkhanger Copse and followed a pleasant path along the edge of the wood to emerge on a muddy track with fields on both sides.

The track crossed a road and became the wider and better Ox Drove. I met some chaps on motorbikes here who said they were enjoying the challenge of staying on their bikes as they slid this way and that in the muddy ruts in the track.

The route then crossed the A343 and became tarmaced for a while until it reached this splendid building. It is Grotto Lodge (Grotto Copse is opposite), a gatehouse of Highclere Park. 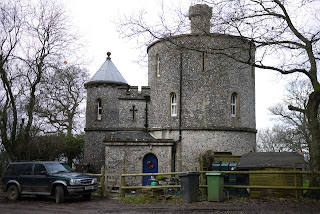 The Lodge was followed by a pleasant track with fields to the left and woodland to the right. 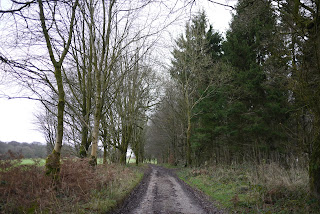 After a while you reach a vantage point marked on the map as Rabbit Warren, at 260m. The track now descends with wide views over open country all around. 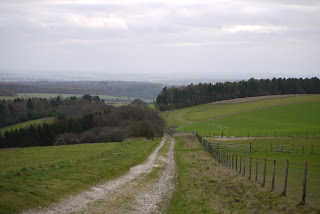 The fractionally higher Beacon Hill (261m) is a major landmark to the east (left).

Time was now almost up: I would have to turn round if i wanted to get back to the car before it became dark, so I descended another quarter mile / 50m of descent and began to retrace my steps just short of this fine oak tree. 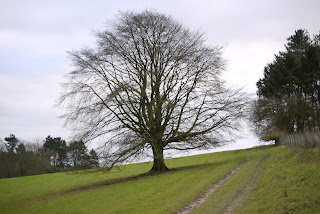 Conditions: cloudy with a threat of rain which fortunately did not materialise, but quite mild.

I was surprised to see a few examples of Red Campion still in flower. 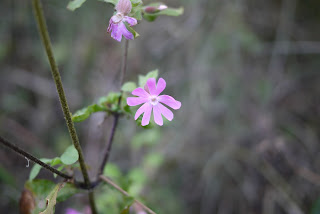 I was even more surprised to see this fantastic growth on the edge of a fallen branch. 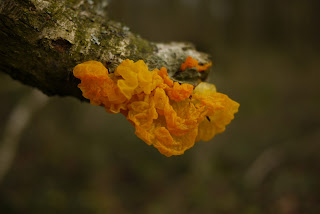 A bit of Googling identified it as the jelly fungus Tremella mesenterica,  known as witch's butter in the US. In the UK the name seems to denote a similar looking but black fungus, Exidia glandulosa. 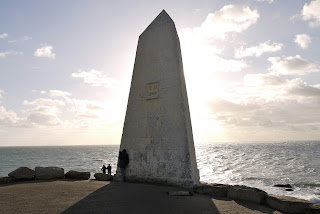 Today marks our 15th and final leg of the Coast Path for this year. We picked up the route at the Lobster Pot and walked down behind the light house to Portland Bill itself. The Bill marks the contact point of two different currents: the relative calm to the east contrasts markedly with the the rougher sea to the west.

As you can see from the photo it is marked by an obelisk: it is 23 ft tall and was put there is 1844. The inscription also carries the initials TH - presumably Trinity House. It was apparently installed as a warning of a low shelf of rock extending 30 metres South into the sea. 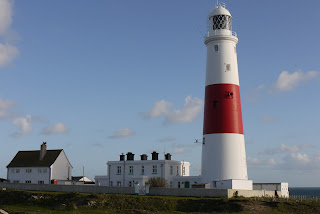 There are two other older lighthouses nearby: one is now a private house and the other is a bird observatory.

Soon afterwards, we passed the fancifully named Pulpit Rock. Apparently it was left after a natural arch was cut away by quarrymen in the 1870s. 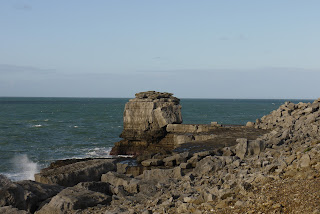 The route now crosses a grassy area to reach the west coast proper and then continues along the cliff top. The rocky headland of Blacknor dominates the view. 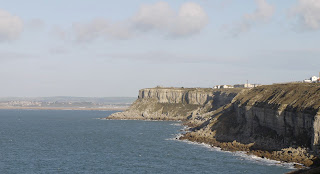 As you approach it, you pass the soviet era buildings of Southwell Business Park and the village of Weston.

Then there is a curious single-storey round house, quite modern in appearance built right on the cliff top. Our taxi driver on the way into Weymouth told us that the site was once a gun emplacement. The house appeared abandoned. We wondered what the full story was.

Just after this we headed inland to see the church of St George which we had noticed on our taxi ride down to Portland Bill. This striking church is built of Portland stone, as is only proper and has an Italianate feel (the tower and the sort of dome over the crossing), as well as echoes of Wren's London churches in the design of its windows. Our taxi driver thought it was in fact the work of Wren. 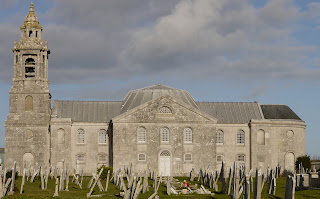 Pevsner describes it as the most impressive 18th century church in Dorset (which could be seen as fairly faint praise). He reveals that it was designed and built 1754-66 by a local mason, Thomas Gilbert. "His conception has true grandeur" says Pevsner. We thought that the ends of the transepts were especially dramatic. The church is no longer consecrated and was closed, so we could not see inside.

After this cultural interlude, we returned to the Coast Path and soon found ourselves walking along West Cliff and then above Chesil Cove, where the eponymous beach begins. There were some great views of Chesil Beach. 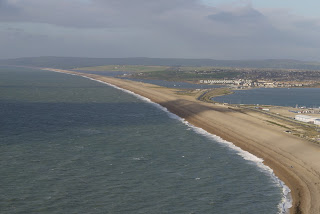 We descended some steeps steps to reach sea level and were struck by just how steep the beach is. From the landward side, it does appear like a great gravel dune. 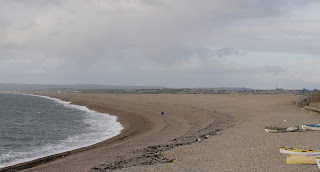 That was about it really. We wandered through Chiswell, had a refreshing drink at the pub, and walked the two miles or so back along the causeway, the last part into the face of an icy shower.

Rating: three and a half stars. We preferred this side of Portland.

When we started the Coast Path in January, I said that we intended eventually to get to Weymouth or perhaps Lyme. Having already reached Weymouth, we are now beginning to contemplate doing the whole thing. At the current rate of progress, that would take 10.25 more years, by which time we would be into our seventies (ouch!). But as we have now shifted to doing linear rather than circular walks, it should be possible to make faster progress. We are moving towards a goal of completing it by the I am 70, in 2020. How thrilling is that?