This is something of a historic occasion: the first walk we have done which is not from a walk book.

The walk begins from the pub in the hamlet of Stone Allerton. A short way along the road towards Wedmore and a path heads northwest towards Axbridge and Cheddar. A short distance across fields and you arrive at the top of Brinscombe Hill with splendid views towards Cheddar across the Somerset levels.

We then descended the hill and followed the River Axe east for a while before turning left and left again to head west along the Cheddar Yeo.

A further left turn brought us back to Brinscombe and walking uphill through a series of lanes returned us to Stone Allerton.

About 5 miles in all. 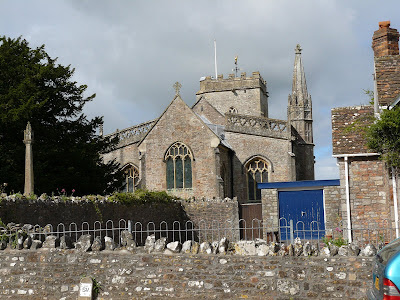 The walk begins at the church in the pretty village of Burrington and is essentially in three stages. The first involves a steady climb through woods to to foot of Black Down. The second involves a longer stretch across the foot of Black Down, parallel to the ridge. And the third involves - obviously - a steady descent, across the common of Burrington Ham and finally again through woodland. 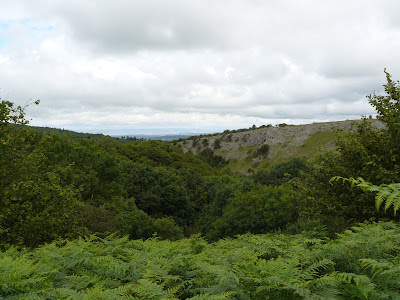 The natural rock fissure of Burrington Combe is famous as the inspiration for the hymn Rock of Ages. The Rev Augustus Toplady was inspired to write it as he sheltered from a storm in cleft in the rock.

Although only four miles, this walk offers a good work out and some wonderful countryside. 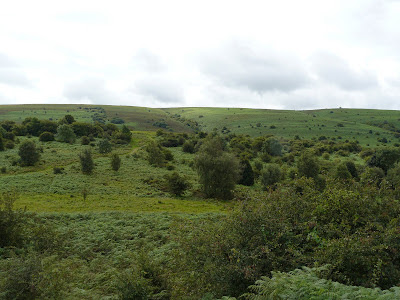 Black Down from Burrington Ham

From: Village Walks in Somerset by Anne-Marie Edwards (Countryside Books 1999).

Marvellous views from the Down across to the Severn Estuary and Wales. Black Down is the highest point on the Mendips at 1000 ft.

We went off the route on the way back and ended up walking 5 miles, having made a much more comprehensive examination of Burrington Ham than planned. The familiar story of over-confidence - we thought we remembered the way from the last time we did this walk. However, once we realised we were lost, the basic geography kept us straight: keep going downhill, keep the road on the left, keep Black Down behind.

A short (4 miles) figure of eight walk starting in the village of Newtown at a parking area on the edge of Newtown Common. The walk passes through pleasant woods to skirt the edge of the common, cross two main roads and climb to the fairly inconsequential Horris Hill. It then loops back and ends with a further section through the woods which cover the common. Couldn't find a photograph to capture anything distinctive.

Two lovely fritillary butterflies in quick succession: a magnificent Silver Washed Fritillary (predominant colour a gorgeous orange - the largest fritillary with a powerful gliding flight) and a Dark Green (actually brownish looking) Fritillary disturbed from its position on the side of a wooden gate.

Then on a nondescript patch of weeds, mainly thistles, a dozen or more Brimstone butterflies - perhaps newly hatched. Every plant seemed to have one.
Posted by PH at 22:00 No comments: