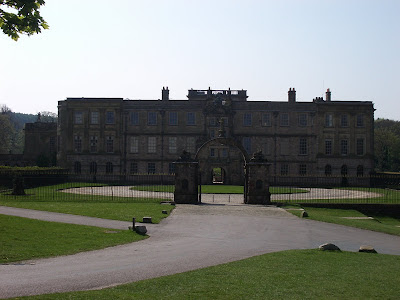 In Cheshire for a wedding, we went on this walk to try to clear away the resulting hangover. Lyme Park is an 18th century Palladian style country house set in vast grounds on the edge of the Peak District. The walk starts from the car park, passes the back of the house and then climbs to a building called the Cage, from which ladies would apparently watch hunting. 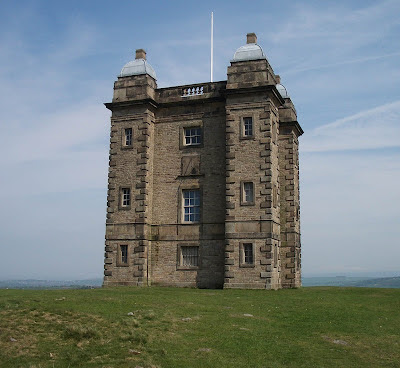 From there, it climbs and swings around through woodland, above the side of the house and past a folly called the Lantern, built from stones taken from the Elizabethan house which preceded the current one and reaches the open moor. The bulk of the walk is a circuit of the outer edges of the estate across high windy moors, with splendid views in all directions. 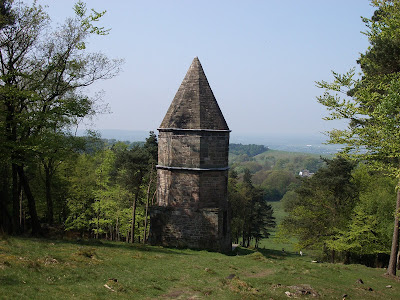 Overall six miles of exhilarating walking, with the opportunity from the various ridges and high points to see where you've been before - always a bonus.

How unusual to start and end a walk from the car park of a National Trust property but reach isolated moorland before long - and then return to hordes and hordes of people picnicking beside the lake.

Lots of sheep! A few orange tip and small white butterflies (or maybe they were female orange tips, which - rather unfairly - don't have any orange on their wings). Larks in the fields beside the descent from the moors and some lovely cowslips (unfortunately the photo was blurred). Unlike on my last walk nearer home in Arborfield the rhododendrons were not yet in flower.
Posted by PH at 23:31 No comments: Just time for a short local walk this morning, so repeated one I often do when I want to get out but time presses. From the pub in the centre of this small village (albeit located on a fairly busy road) the circular route goes past the village church and then along a series of tracks past fields and through woods, and twice over a stream. Unusually for this part of the country there is only one stile - and you can walk round it. It offers nice views over undulating country and a lot of variety in a short distance.

Rating: four stars (probably a bit generous, marked up for being near)

More than anything I was struck by the vibrancy and variety of shades of green. The new leaves on the oaks and other trees were just so bright and well, green. Is it always like this at this time of year and I have never really paid attention - or are the current dry sunny conditions in some some way responsible?

In one of the wooded areas I came on some rhododendrons which were already coming into flower. A lovely sight, but a bit premature. Charterhouse (in the Mendips) 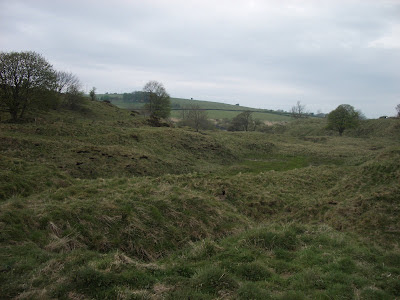 "Gruffy ground" (the remains of mining activity) at Charterhouse

A regular weekend walk, built into a visit to Somerset. The walk starts in a one-time mining area, going back to the Romans, near the village of Charterhouse. The route climbs from there and then bears east along a long ridge overlooking Chew Valley lake. It goes on via new woodland to the village of Compton Martin and then swings back. There are fine views and some lovely walking. The only let-down is that there is a mile and a half along a (quiet) road towards the end. 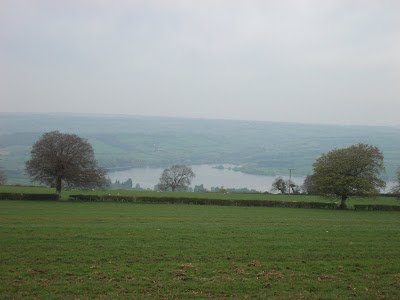 Rating: 3 and half stars.

Another couple arrived to start the same walk, from the same book, moments after us. (An obvious risk of relying on walk books, but not something that has ever happened before.) We dawdled to let them pass thinking we would rather follow than lead. However, they took the wrong line in the first large field and we went ahead - feeling it must be admitted a bit smug. We amused ourselves for much of the rest of the walk by monitoring the size of our lead.

However, later in the walk we were deep in conversation about summer holiday plans, and over-confident about how clear the route and the directions were - and found we had strayed from the route ourselves. Our followers were out of sight, but perhaps they experienced the joy of schadenfreude. We had our Explorer map with us and were able to work out more or less where we had ended up and before too long got back on track. Always carry a map!

Part of the walk was on "permissive" paths. I know this means the landowner has given permission, but there is no right of way - but why not "permitted"? Permissive puts me in mind of, well, the permissive society, the 60s, dalliance. No sign of any of this, though. Probably just as well. A cartoonist could have a field day.

We stumbled on this wonderful Victorian folly near the end of the walk. The plaque under the gable says that it dates from 1869 and was the work of John Clarke, builder, of Blagdon. 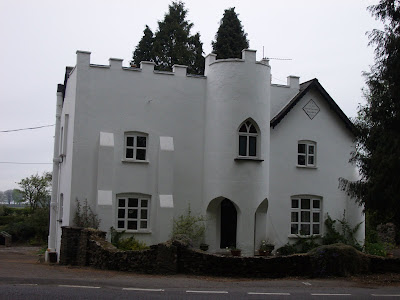 For once, not a single butterfly - but it was dull and windy. But we did see some nice marsh marigolds: 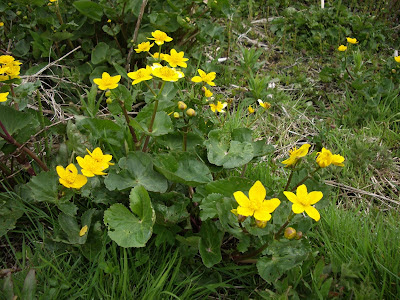 I just didn’t feel like working this morning and so I bunked off to go on this walk.

It is a circular walk starting in the centre of Kingsclere, south of Newbury, up onto the North Hampshire Downs – home of the famous Watership Down which inspired Richard Adams.

The route winds uphill to the along , a broad hedged track. At the top I took the shorter alternative and went right along a long ridge, with magnificent views to the south. The silence was broken only by the birdsong and the sound of the rind in the trees. Then back towards Kingsclere alongside some horse gallops. My route was 4 miles – the full route is 6½. I look forward to doing the whole thing before long. I was struck by the intense yellow of the massive field of oilseed rape to the right of the lane. Later looking down on it from the ridge, the intense contrast with the surrounding country and the tractor tracks within the field gave it abstract geometrical quality. I know it’s not very traditional but I confess I quite like the intense colour.

Then – not by coincidence – I saw an interesting piece in today's Guardian entitled “Seeds of discontent” .

Apparently, oilseed rape now accounts for 17% of the crops cultivated in the , and production has risen 17% in the last year. It was originally grown for lamp oil and more recently for cheap cooking oil, margarine, cattle feed and other humdrum uses. Now it is used for bio-fuel, and most of the ’s production is destined for . In addition, some enterprising farmers are marketing “extra virgin rapeseed oil” to rival the olive product.

However, the downside is that it is vulnerable to numerous pests and diseases and therefore needs extensive chemicals to keep them under control.

And while on the walk I came on two notices by a field of barley giving information about the crop and about supporting nature by allowing field edge weeds to thrive. They were sponsored by LEAF – Linking Farmers and the Environment - a charity which promotes Integrated Farm Management: “A whole farm policy providing the basis for efficient and profitable production which is economically viable and environmentally responsible. IFM integrates beneficial natural processes into modern farming practices using advanced technology. It aims to minimise environmental risks while conserving, enhancing and recreating that which is of environmental importance”. Seems like a worthy endeavour.

5 species of butterfly: small white, large white, brimstone, a blue of some sort, small tortoiseshell.
And a yellowhammer – a bird I haven’t seen for ages.

Brimpton and the River Enborne 
A regular Sunday walk. This was a circular walk starting at Brimpton in descending to go beside the tiny, winding Enborne, through several pretty meadows. The Enborne later flows into the Kennet at Woolhampton. The church spire is a landmark for miles around.

From: Waterside walks in Berkshire by Nick Channing, Countryside Books, 1999. According to the Berkshire volume of Pevsner's Buildings of England, the church was rebuilt in 1869-72 by John Johnson in the decorated gothic style. The tower in fact dates from 1748 - the flint facing and the spire were added in the rebuilding.