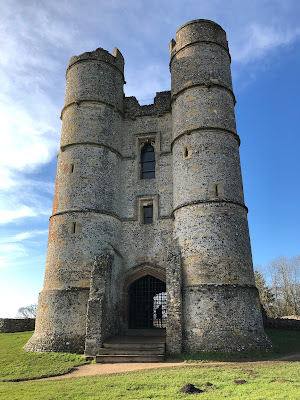 We have been trying to get into the habit of doing regular walks around Newbury. Recently we were half way through a circular walk heading downhill along Wendan Road. We were struck by the sudden appearance of Donnington Castle on high ground to the north of the town. It struck us that we could vary our walking by doing a walk from home to Donnington and back - about 5 miles.

We set off from home and headed for the Kennet and Avon Canal, crossing the Monkey Bridge into Northcroft Park. We then followed the left hand edge of Goldwell Park to emerge onto Speen Lane. Now we followed the Old Bath Road for a short way to reach Bath Road. It reminded us of how we nearly bought a house here - and how glad we were that instead we bought the house we now live in!

We turned right into Brummell Road and right at the end into Grove Road. This brought us to the entrance to Donnington Grove, where we uncharacteristically ignore a no right of way sign to follow the tarmaced road through the golf course to reach a bridge over a large lake which is part of the River Enborne. 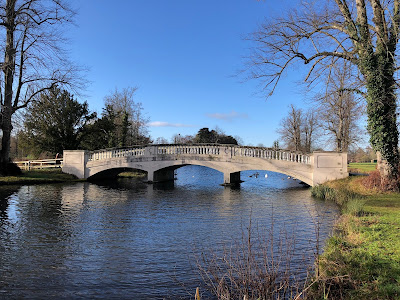 Over to the right was an attractive small folly. 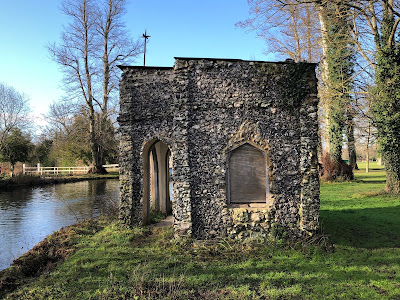 We crossed the bridge and had a distant view of the hotel. We climbed uphill - a somewhat muddy climb - and passed the Donnington Almshouses to climb towards the ruins of the Castle. This was our first, sideways on, view of the Gatehouse, which is really all that remains. 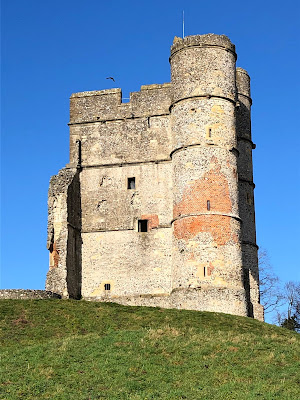 The Castle was built by Sir Richard Abberbury in 1386, but was sold 12 years later to Thomas Chaucer (son of Geoffrey Chaucer). Chaucer's daughter Alice married the Duke of Suffolk. Suffolk fell out with Henry VII and the castle became a royal property. It fell into decay soon after. In 1643, when the Civil War broke out it was captured by the Royalists and its defences were improved. After an 18 months' siege by the Parliamentarians which began in 1644, the garrison surrendered. In 1646 Parliament voted to demolish the castle and only the gatehouse was left standing, although the outline of the defensive walls can still be made out.

The front-on view is more imposing (see the photo at the top of this post).

And this is the view of the Gatehouse from behind, which gives some sense of the Castle's original scale. 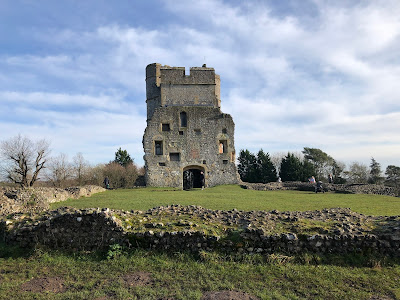