It is perhaps a bit odd to be reviewing this book now. It first came out in 1996, and the paperback edition I read was a Christmas present from my wife in 2003. The trigger was a new year’s resolution to systematically read all the books I have been given that remain unread – a shockingly large and varied collection. I am so glad I have finally got on to this delightful book, which is also the occasion of the first of what I hope will be a substantial series of reviews of books connected in some way with walking.

Thomas Pakenham’s book is apparently the first book of tree portraits since Jacob Strutt’s Sylva Brittanica of 1826. This gives a clue to its character – it is a personal selection of 60 remarkable trees from around the . They are trees which are large, old and possessed of a strong personality. Pakenham says that his only criteria were that the trees should be alive (or dead on their feet) and photogenic.

Each tree has a short chapter to itself: a photo and a page or two or text. The photos are stunning and really bring home the sculptural and architectural qualities of large trees. The text is, sensibly, not to a standard pattern and covers some or all of: a physical description, the history of the tree, myths and stories which surround it, and perhaps a poetical or literary reference. Some of this shows the author’s learning, but it is lightly done. The only weakness – indeed the only weakness of the whole book is that some of these short chapters end with a whimsical punchline.

One surprise for me was that the measure of the size of a tree seems to be its girth rather than its height. So a really big tree for Pakenham is one with a 30ft girth – the top might have fallen victim to lightning , but this is still a big tree. A friend told me the other day that to some extent girth and height are alternative growth strategies for trees: trees planted in a wood compete for light and push upwards, while those planted in parks and fields have the luxury of spreading themselves. This seems to be born out by Pakenham’s examples.

Perhaps the major message of the book – beyond the wonder and glory of fine trees – is that we take them for granted and pay them little attention, even though many are significant historical monuments. Pakenham describes a visit to see the Fredville Oak (in ), one of the two largest common oaks in , with a 40 foot girth, and tall to boot. It was featured in Strutt’s book of engravings and known in the early nineteenth century as “Majesty”. Enquiring at the local pub, Pakenham found that nobody had even heard of it. Nor, presumably, was there a sign or a plaque.

So, a delightful book, a joy to read, which has certainly opened my eyes to the trees I pass by on my walks.

Thomas Pakenham – Meetings with remarkable trees, Cassell Paperback 2001. First published 1996 by Weidenfeld and Nicholson.
Posted by PH at 17:32 No comments: 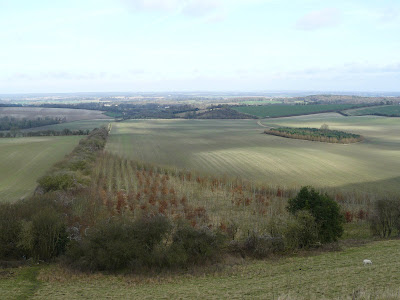 The walk begins in the small village of Lower Green, which feels like a suburb of the sprawling, but still quite small, Inkpen. You quickly turn off the road to take a long path which climbs up towards Inkpen Hill and the splendidly named Gallows Down. On reaching the ridge after a fairly stiff climb you turn left (east) and walk along the Test Way to reach the double gallows of Combe Gibbet. 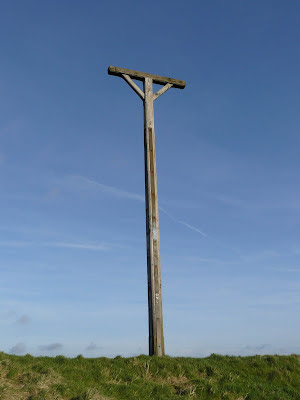 The walk continues along the Wayfarers Walk over Walbury Hill, the highest point in South East England (although only 297m). Then back down through woodland, fields and lanes back to Lower Green, home of the excellent Swan Inn with its organic food, organic brewery and farm shop.

According to Wikipedia Combe Gibbet was erected in 1676 for the purpose of hanging George Broomham and Dorothy Newman and has not been used since. The gibbet was placed in such a prominent location as a warning. The gibbet you see is of course a replica, one of a long series.
George and Dorothy were having an affair and were hanged for murdering George's wife Martha, and their son Robert after they discovered them together on the downs. Unfortunately for the lovers, the murder was witnessed by one "Mad Thomas", who managed to convey what he had seen to the authorities.

Spring seems to be on its way already with these snowdrops and even a field, which seen from above seems surprisingly green. 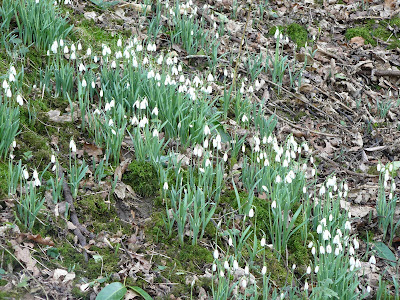 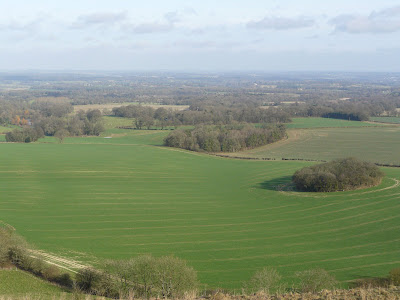 Towards the end of the walk we spotted a stoat, standing up and surveying its territory with cool aplomb. I wasn't quite quick enough to get a photo.
Posted by PH at 12:04 No comments: 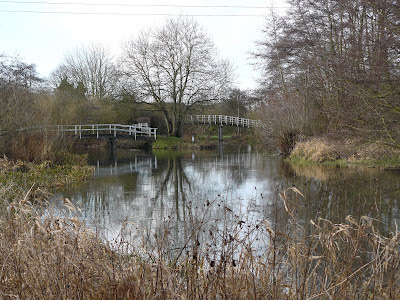 This is a surprisingly pleasant 4 mile walk which never strays far from the centre of Reading and begins in the car park of a retail development and passes through a former council estate! From this inauspicious start, you quickly join the towpath beside the River Kennet and follow it first south and then west for a couple of miles to reach Milkmaid's bridge and then Southcote Lock. Milkmaid's bridge is the more distant of the two bridges in the photo.

The return route then goes through Coley Park and returns along the narrow Holy Brook. 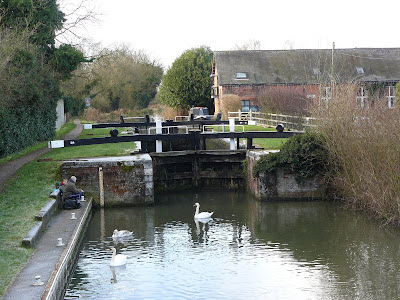 Southcote Lock
Posted by PH at 18:36 No comments: