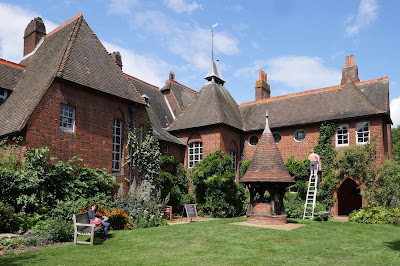 I have been an enthusiast for William Morris and his circle for a very long time, but not until today had I seen Morris's first family home, the Red House - it was the natural next step after our recent visit to Kelmscott Manor.

Morris and Janey married in 1859 and Philip Webb was commissioned to design the house (Morris took responsibility for the interior decoration. It was Webb's first commission. (You can read about the rest of his output in Sheila Kirk's excellent book Philip Webb. Pioneer of Arts and Crafts Architecture). Morris and Janey only lived there until 1865, during which time their daughters Jenny and May were born. Fortunately, the house had many sympathetic owners thereafter, including three architects in succession. A Trust was established in 1998 to take over the property from the last private owners, and the house was acquired by the National Trust in 2003.

The first sight of the house comes as you walk along the drive. A large red brick building looms in front of you with irregular massing and a projecting tower over a large open porch. The tall windows seemed reminiscent of the Board schools which were built all over London later in the 19th century. 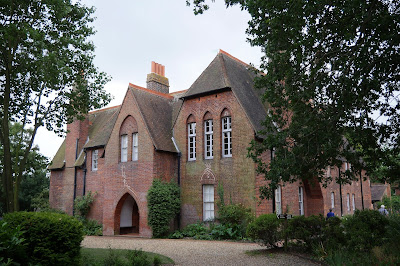 We join a very good tour which starts in the entrance hall. It seems rather bare and the main item of interest is the settle on the right hand side with unfinished paintings by Morris depicting the Joyous Gard (the home of Lancelot in Arthurian legend) on the doors. 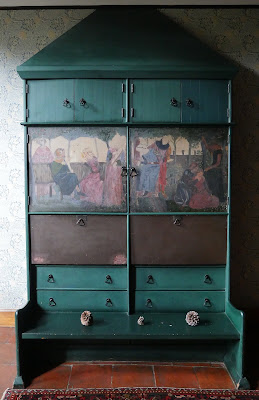 We move next into the Dining Room where the main item of furniture is a massive dresser designed by Webb. The National Trust have restored it to something like its original colour scheme. 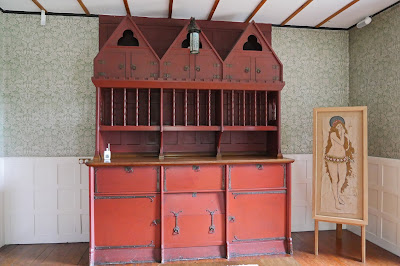 The main decoration in this room was intended to be set of eight embroideries of Chaucer's "Good wimmin". One of these is illustrated on the right. The completed ones can be seen at Castle Howard and at Kelmscott Manor.

We headed upstairs and admired the recently decorated ceiling 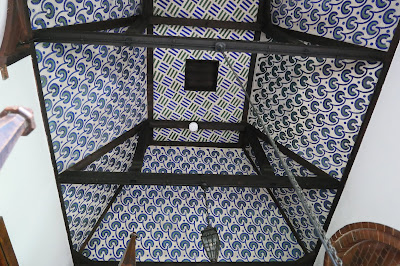 The first floor Drawing Room was the heart of Red House. It is decorated with a painting by Burne-Jones called the Tale of Sir Degrevaunt. 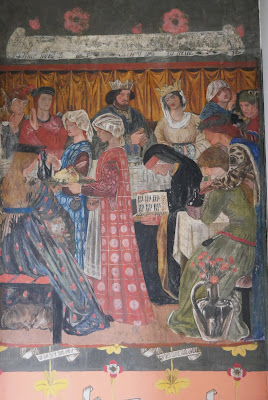 In the bedroom of Morris and Janey is a mural, discovered only in 2013, thought to be the collective work depicting characters from Genesis by Edward Burne-Jones, Dante Gabriel Rossetti, his wife Elizabeth Siddal, Ford Madox Brown and Morris. You can read the full Guardian story here. 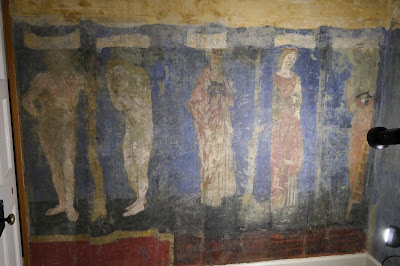 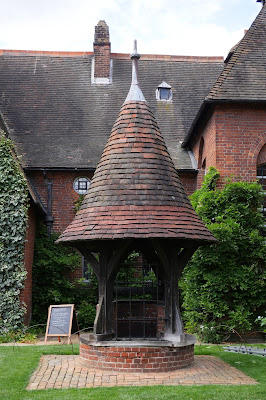 We completed our visit with a look at the back of the house. 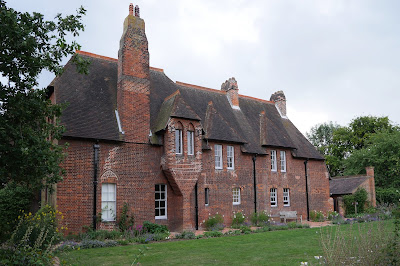 This was the most striking feature. But what would you call it? The answer I am informed is "a buttress supporting an oriel window". 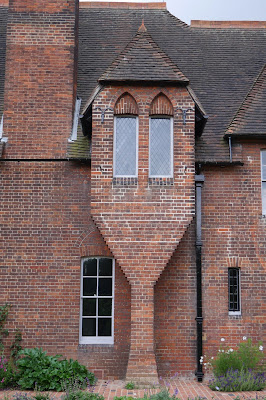 Conditions: cool, threat of rain, but some sunshine (we got wet on the way back to the station though).

Rating: Five stars. A must for anybody interested in the Arts and Crafts movememnt or 19th century architecture in general. The National Trust have done some great restoration work, but there is still more to do.
Posted by PH at 22:23 No comments: