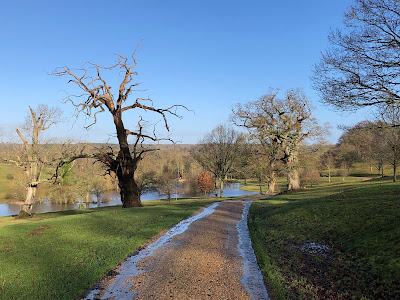 After a lot of recent rain we decided we just had to get out for a walk. Hamstead Park offered the possibility of a pleasant stroll in the winter sunshine mainly on gravel paths. We parked at Enborne church and crossed the road to enter the park. The path initially goes on the level through classic country house parkland with scattered large trees.

At the end of this section there is a little group of houses pretty much in the centre of the park and and the route diverts around it across grass and then down and up hill to rejoin the gravel road on the other side. We got suitably wet.

The route now descends towards the lake (see above) which is surrounded by a greater density of trees. It is very picturesque.

As you get closer you can see that the lake is in two sections and has somewhat overflowed its normal boundaries. 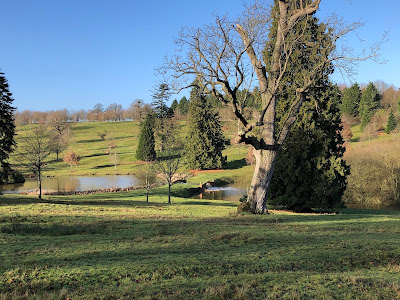 As we reached the end of the lake we saw that it flows into a stream which is crossed by a bright and jolly little bridge. 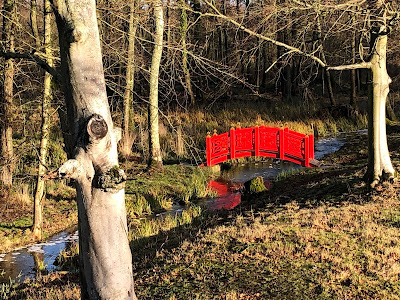 The path takes you round to the left with the lake now on your left and a small river (the Kennet) on the right. The Kennet and Avon Canal lies beyond it. 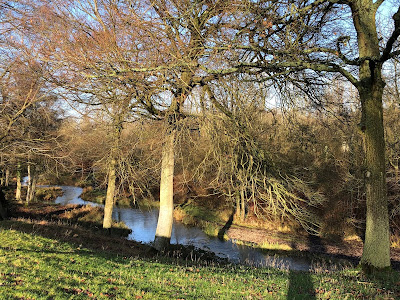 Climbing now you pass the totally overgrown remains of what was once a Norman Motte and Bailey castle. It is no longer really obvious. We did this walk in March 2010 and looking back it is staggering how clear the motte was at that point. 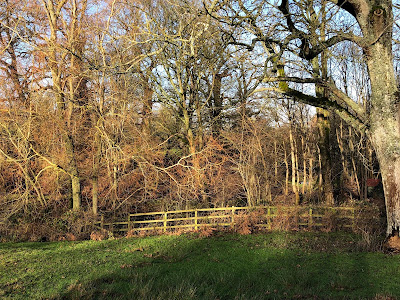 Just beyond it is the church of St Mary, dating mainly from 1612. 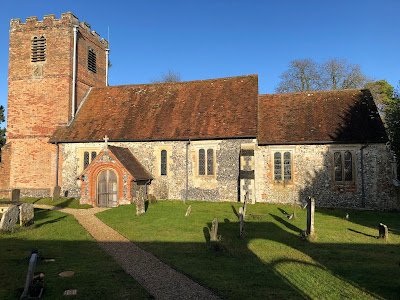 After the church there is a wide grassy area with some fine gate posts standing in splendid isolation.  But what of the two sets of gate posts? In fact, as you look around, no less than six sets can be identified. These two (which date from 1663) ... 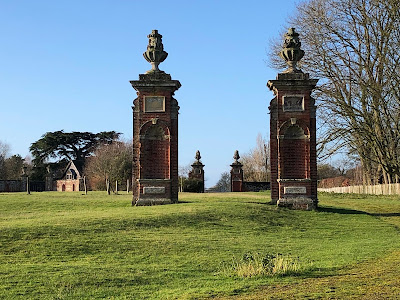 ... and six more further away (four can be found in this photo). 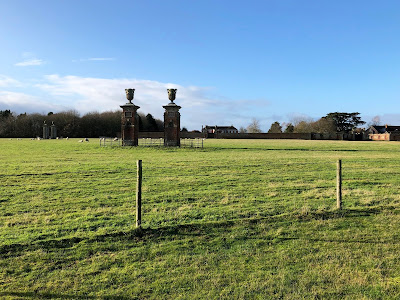 They are, it turns out, the remnants of a mansion built for the first Earl of Craven. Most date from the building of Hamstead Marshall house between 1663 and 1697, though some may be later. The walls and gardens which they gave entry to have long since disappeared since the house burnt down in 1718.

After this we simply retraced our steps.