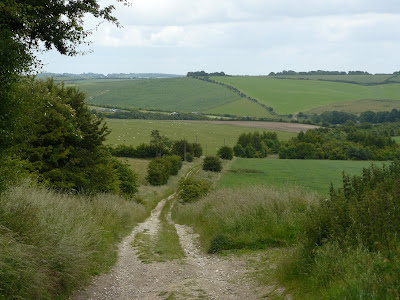 This is a simple, basically triangular walk. It starts from the pretty village of Eastbury, north of Hungerford, and follows the line of the narrow but fast flowing River Lambourn to Lambourn itself. There is then a steep climb up the hill to reach the downs followed by an exhilerating walk up and down back to Eastbury. 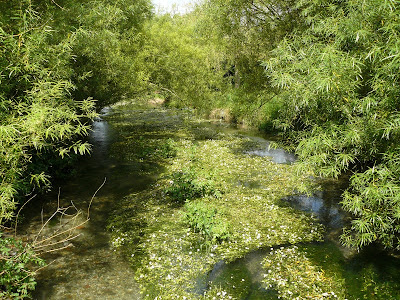 The Lambourn is a very attractive stream, which although clear and fast flowing also has in places a carpet of flowers on top of the weeds.

Lambourn town is approached via a modern housing estate and a fish and chip shop, but soon reveals its racing heritage with a saddle maker's shop and signs to the equine hospital. There are some lovely Georgian and Victorian houses, one on the road in has a beautiful terracotta plaque on the corner. In the centre is a lovely old church and the amazing almhouses - see below.

Once on the downs, the sense of openness and sky is wonderful. The downland is punctuated by racing gallops - the curved route in the valley in the picture below. 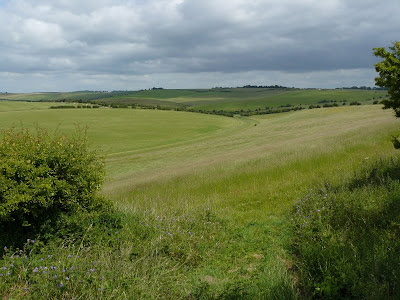 A quite energetic six miles in all.

Rating: Four stars. Next time I think I would start the walk from Lambourn. The only drawback with the walk is the long climb up from the racing gallops to the next ridge coming near to the end of the walk. I think I would prefer to have the flat bit along by the river at the end! However, I suppose it would be less obvious as a "waterside" walk then.

Lots of poppies in intense orangey-red. The corner of the field below is worthy of Monet and added an intense flash of colour to the usual variety of shades of green. 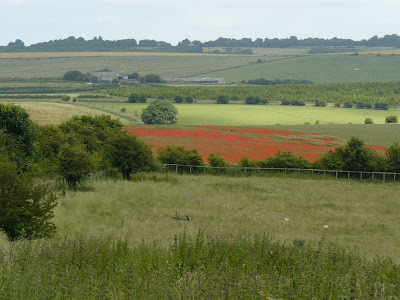 In the early part of the walk I came upon a hare at the edge of a field. How big! And what big ears! The picture reveals that there was also a deer, that I did not spot at the time, lurking in the background. 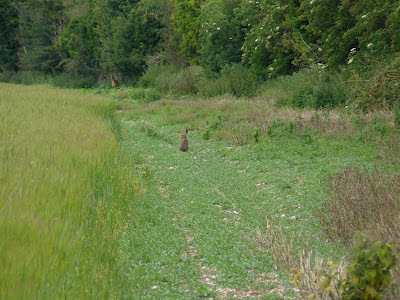 Apart from that, lots of brown butterlies: Ringlets in profusion, and the occasional Meadow Brown and Small Heath.

I spotted these quite by chance - I saw some beautiful brickwork and an imposing gatehouse behind the church. A passerby very kindly explained that the building was almshouses and showed me inside. 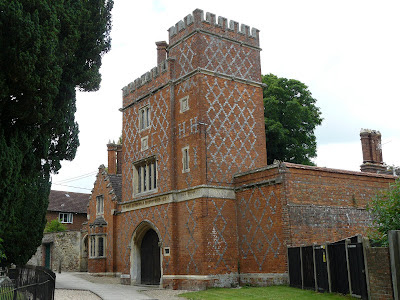 The lettering above the doorway says "By John Estbury AD 1502. Rebuilt by Henry Hippisley AD 1852". The initials JE and HH are visible higher up the wall. Pevsner describes the almhouses as "very picturesque", although he credits them to T Talbot Bury, so Mr Hippisley was presumably the builder. Pevsner also describes the interior cloister as "sweet", which is very apt. 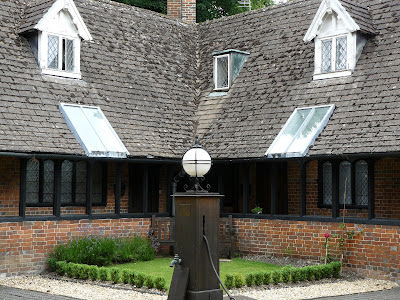 He does not mention three sculptures of "green men" which my guide drew my attention to. One is round the left side of the gatehouse (below) and there are two others inside. 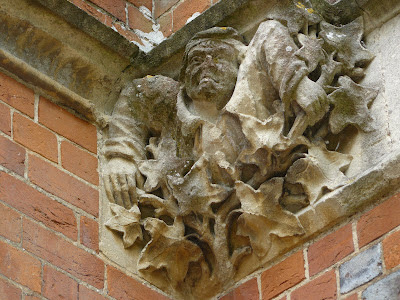 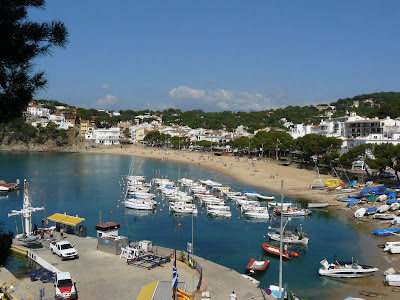 
In Llafranc on the Costa Brava for a few days visiting a friend, we were inexorably drawn to the coastal path towards Callella de Palafrugell and Cap Roig. We started the walk on one side of the bay of Llafranc, descended 15o steps and walked along the seafront promenade, behind the quiet sandy beach. (Seems unreal - Spain in June, quiet beach - but that is Llafranc.

At the far end, up more steps and lovely views back to Llafranc through the trees. 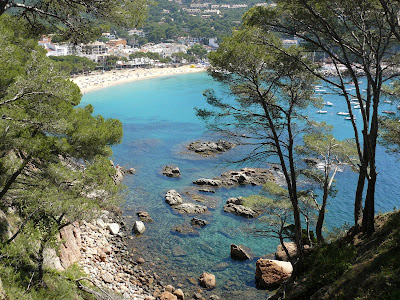 On round the coastal path to the next village, Callella de Palafugell. This is bigger: more beaches, more restaurants, more people, but still calm and not crowded. Through the village and up the slope on the other side to continue the path, quieter now. Again, impressive views back. 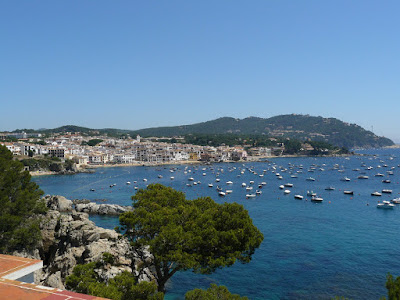 Further on the coast becomes more indented and a little wilder, although in truth the whole path is exquisitely maintained and has a slightly suburban feel. 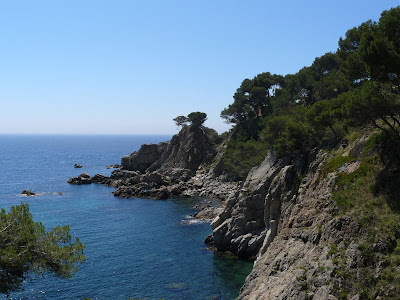 We did not go the whole way to Cap Roig. The coastal path ends at a small sandy beach at Golfet, while the route to the cape and its Botannic Garden goes inland a bit: up steps and along roads. It seemed too warm for that - something for another day.

A lovely walk: blue sea, lovely coast line, delightful resorts. It reminded me a lot of a similar coastal walk around Cap Ferrat.

You can't exactly call this part of the Costa Brava unspoilt, but it certainly has been developed in a sensitive and restrained way, avoiding all the hazards of mass tourism.
Posted by PH at 17:51 No comments: 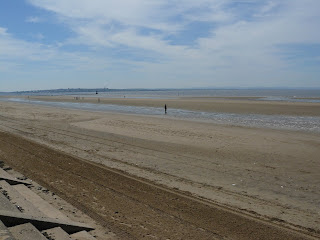 Visiting Liverpool, our first thought was to do our usual style of walk inland. But then a much better idea struck - why not go and see Antony Gormley's celebrated men on the beach / in the sea at Crosby.

We parked in a quiet street full of splendid Victorian mansions, crossed a grassy area behind the dunes and came on the beach with a promenade behind it. The picture below shows the first view of men and beach. 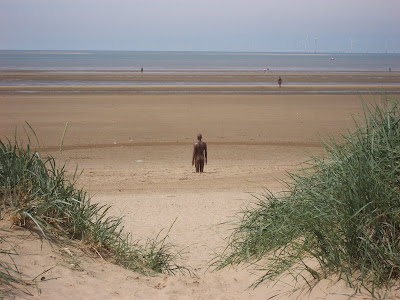 The installation - correctly known as "Another place" - consists of 100 life size figures spread out along 3 km of beach. They are made from cast iron, from a mold of the artist's body.

I hadn't realised that they had previously been displayed in Cruxhaven in Germany, Stavanger in Norway and De Panne in Belgium. It had been planned that they would move to New York at the end of 2006 but after a successful appeal it is now planned that they will remain permanently in Crosby.

The figures are all on a one metre base and some are slightly above ground (sand) level and others are set into the sand up to the knees. Most are immersed in the sea at high tide, while some are permanently under water.

One surprising feature is that because the figures are quite widely spaced out, you can only really see a few at a time. Looking along the beach they become indistinguishable from the real people out for a walk or sight-seeing. 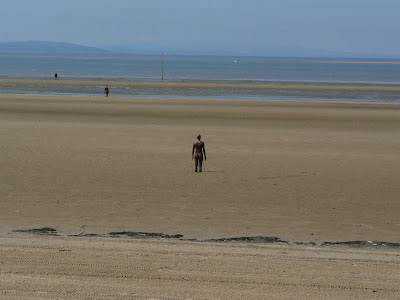 It would be interesting to see an aerial photo, but it seems that the figures are arranged in parallel lines at a slight angle to the shore, so that as you walk along the beach from south to north the figures are gradually further from the shoreline.

According to Sefton Council's website "The work is seen as a poetic response to the individual and universal sentiments associated with emigration - sadness at leaving, but the hope of a new future in another place."

The figures certainly have a melancholy air, but you could just as well see them as waiting .... 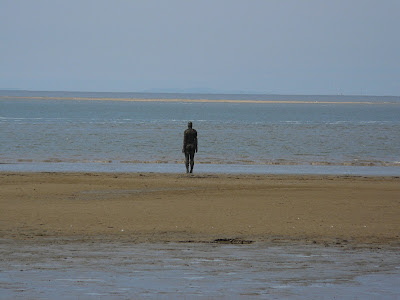 Gormley's own website says that " The idea was to test time and tide, stillness and movement, and somehow engage with the daily life of the beach." And this they definitely do. You can see how exposure to the elements has changed the figures in different ways, and they also make the beach a more interesting place - you could see people taking photos draped over the figures, lined up with them, placing hats and scarfs on them. Perhaps inevitably, one or two have been treated to a a paint job.

It is hard to escape the conclusion that Gormley has a strong narcissistic streak - most of his work seems to involve his own body - but this is a truly impressive and affecting work of art.
Posted by PH at 21:50 No comments: 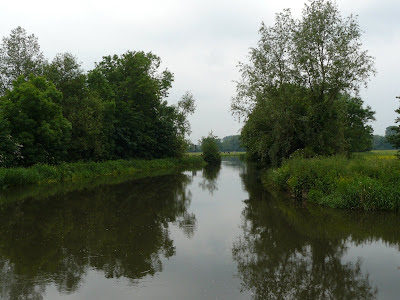 The walk begins on the River Kennet near Theale, just west of Reading. You follow the river bank for a while and then join the Kennet and Avon Canal. Departing the canal, you skirt a lake and then return to the start via lanes and fields, passing through Sulhamstead Bannister. Here the route goes the the burial ground and you can see the porch, the only remains of St Michael's church. Built 1914, demolished some time after 1966. Not immediately clear why. 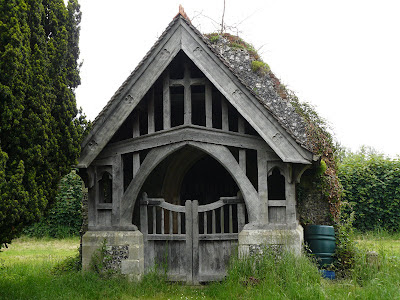 However, my 1966 edition of Pevsner suggests the answer. Pevsner is dismissive of the church: "St Michael. 1914 by EJ Munt; flint, Gothic, and really of no architectural interest at all. Moreover redundant now."

From: Rambling for Pleasure: Around Reading first series by David Bounds for the Ramblers’ Association Group.

Lots of dragon flies by the waters edge. Banded Demoiselles with their dark blue wings, with a distinctive blue "thumb print", and much smaller Blue-tailed Damselflies.

Lots of geese, especially these Greylags. Large groups of these - and also Canada geese - in the fields near the canal. 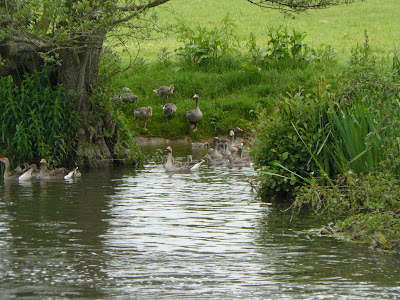 Greylag geese processing into the Kennet

And then a real surprise. "Is there some type of black heron?", I foolishly asked, as this splendid bird landed on top of a tree and spread its wings to dry. Nope - it's a cormorant. Apparently they are increasingly often being seen inland. 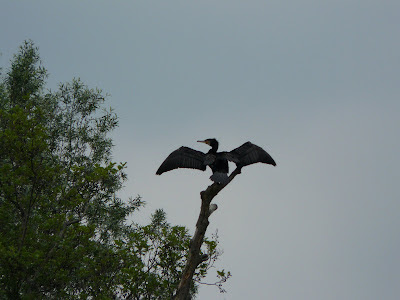