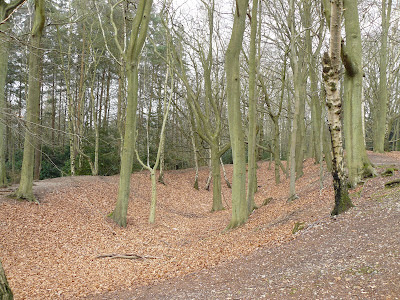 The walk starts at Hermitage village hall and goes across fields to the hamlet of Oare, with a pretty church built apparently on the site of a priory chapel. Thence to Little Hungerford, whose chief claim to fame is that DH Lawrence lived there, at Chapel Farm Cottage, during the first world war. The walk duly passes the fairly unremarkable cottage, then heads into Box Wood and then through further woodland to reach Grimsbury Castle, an iron age hill fort. The picture above shows the vestiges of the defensive ditch.

Opposite the fort is this splendid 18th century tower house. 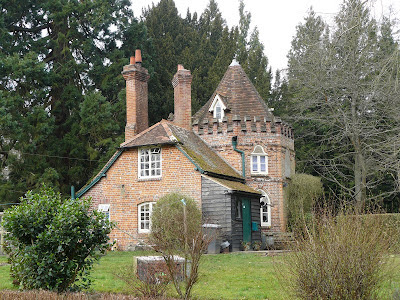 From: 50 walks in Buckinghamshire and Berkshire (AA).

I have recently read Thomas Pakenham's marvelous Meetings with remarkable trees, which has opened my eyes to the dramatic architectural beauty of trees. I enjoyed this fine specimen, sadly dead. 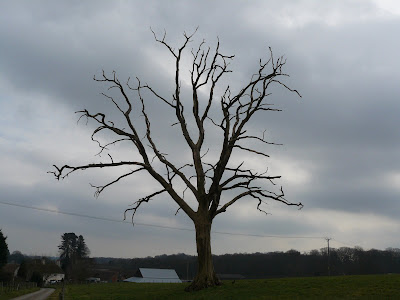 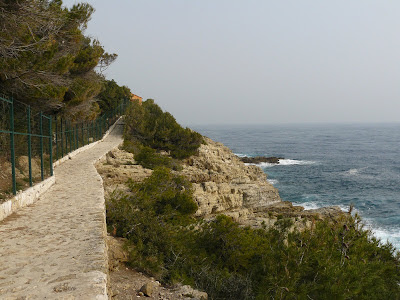 Looking back to the Pointe de St-Hospice

We have been to Nice many times, but this is the first time we have thought of going walking. Cap Ferrat is reached by a remarkably cheap bus ride from the main bus station in Nice. The bus drops you in a beautifully designed and maintained street overlooking the port. Cap Ferrat is essentially a finger of land pointing south into the sea, but this finger has a further thinner finger pointing off to the east: the Pointe de St-Hospice. The walk follows the line of the coast from the town centre on the east, right round to the equivalent point on the west, whereupon there is a short stroll along roads back to the start. 8 km in all.

After passing Pointe de St-Hospice, there is a very pleasant detour to the nineteenth century Chapelle St-Hospice. The chapelle is notable for a vast - and rather kitsch - bronze statue of the virgin and child, but it does have some rather nice stained glass. 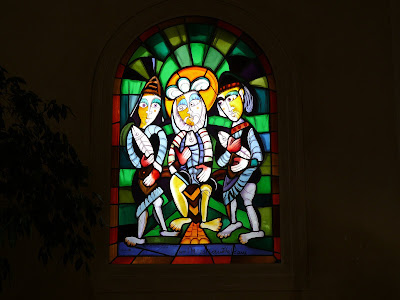 The cemetery has a surprising number of war graves. We think these must have been linked to a military hospital near here during the first world war.

Cap Ferrat itself is a fairly desolate and windswept spot, but the path from then on towards the lighthouse is interesting, passing over curious rock formations. You can visit the lighthouse, but it involves a robust climb up steps, which we decided to forego. 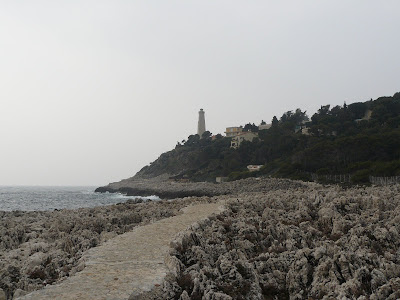 The west coast is less rugged, and the path passes above various small bays to reach the one real beach: the Plage de Passable. Here you turn inland to return to base. 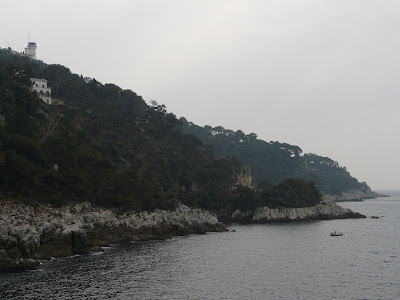 From: Walk and Eat: Nice, by John and Pat Underwood (Sunflower - a new venture for them, and very good it is).

The main lesson is a pretty obvious: there are walks everywhere. You just need to look - and be prepared to do something different, in this case get on a bus.

Cap Ferrat, which must be one of the most exclusive areas on the Cote d'azure, was a surprise. Vast mansions hidden behind high walls located up on the hillside were perhaps to be expected, but the town and port itself were remarkably quiet. Very orderly, but low key and not at all deluxe.

The other surprise was an area of wasteland on the east of the main peninsula which was really scruffy with derelict buildings and rubbish. Virtually every other part of Cap Ferrat is so tidy and private that we wondered what the story was.
Posted by PH at 21:45 No comments: 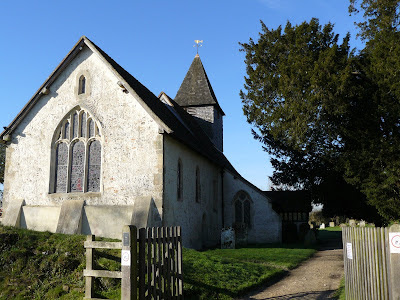 An early start on a cold but sunny Saturday morning took us from the centre of Mortimer in Berkshire south across the county boundary to Silchester in Hampshire. After leaving the edge of Mortimer via the wonderfully named Summerlug, a track leads down to a small brook, across a field and on through the delightful Nine Acre Copse, via more fields to Silchester. We last did this walk in June.

Bypassing the amphiteatre, we visited the church which dates from 1150 and is situated within the walls of the one time Roman town of Calleva Atrebatum. Inside there are beautiful thirteenth century wall paintings of flowers in the window recesses and this modern stained glass, which looked radiant in the sunlight. 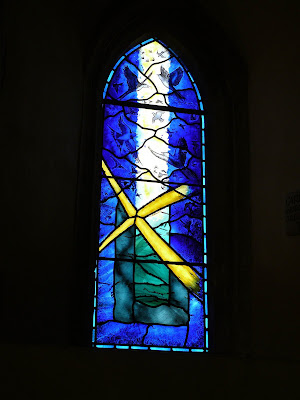 We then completed the mile and half tour of the walls of the Roman town. The first picture shows the walls as seen from the churchyard and the second shows them from Church Road, which runs alongside the walls for a while. A wonderful tour round which put us in mind of Lucca, although in Lucca there is a thriving small city inside to look at as you go past. Here all you can see is grass. 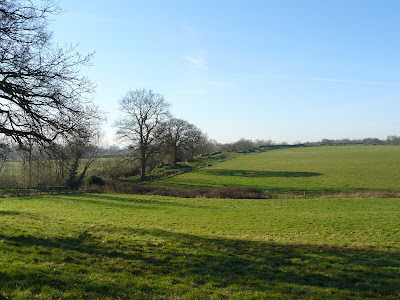 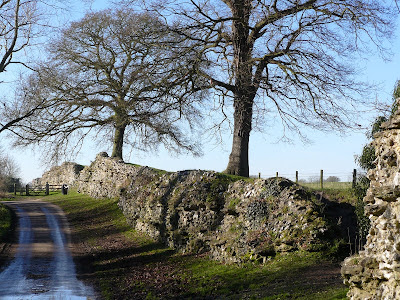 And oak trees - there are some splendid specimens along the line of the wall, like this one below. I owe my heightened sensitivity to this to "Meetings with remarkable trees" which I read recently and reviewed. 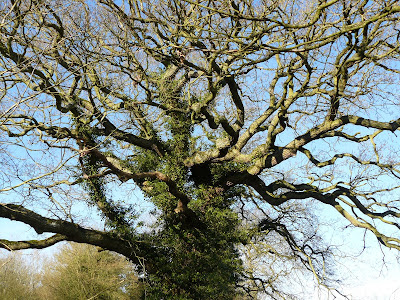 From: The Mortimer-Silchester route is from Rambling for Pleasure: Around Reading second series by David Bounds for the Ramblers’ Association Group. We added the walk around the walls and modified the route home.
Rating: four stars. 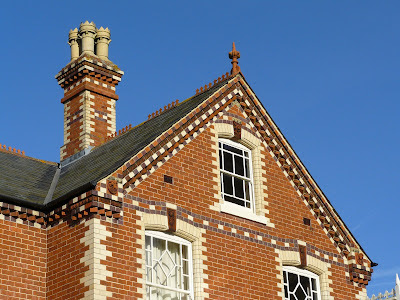 The Roman town of Calleva Atrebatum dates back to the first century AD and the walls to AD 270. The full story of the site is available on the University of Reading website. It is unique among Roman towns in Britain for being completely abandoned - all you now see is the remains of the walls and grassy fields.
Posted by PH at 15:52 No comments: 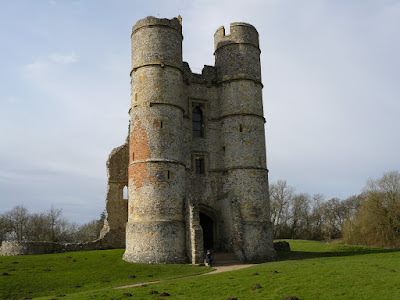 The walk begins at Snelsmore Common Country Park just north of Newbury. You quickly leave the country park and go northwest across fields towards Winterbourne, and then pass between the church and the splendid manor house. 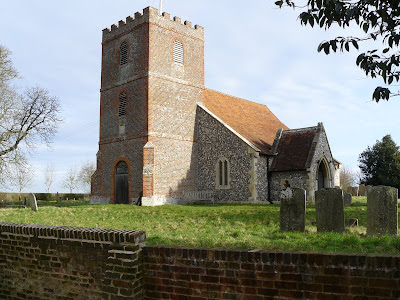 The route then gets reasonably close to the M4 with attendant traffic noise, before doubling back across Boxford Common and Mount Hill towards Bagnor. This section of the walk follows a long ridge with excellent views in both directions. 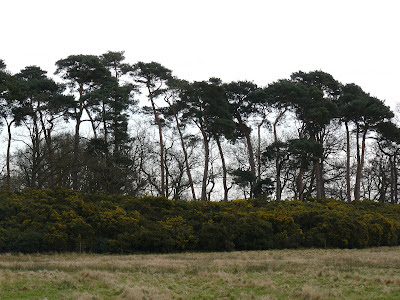 The final section involves crossing and re-crossing the A34 (Newbury Bypass) to visit Donnington castle.

From: Walking in Berkshire by Robert Wilson (Ciccerone).

A licence to build the castle was granted in 1386. During the civil war the castle was successfully defended by royalists during 1644 and 1645. Most of it was destroyed after the civil war and what you see today is the impressive gate house. The plan of the original walls can still be seen behind it.
Posted by PH at 11:25 No comments: