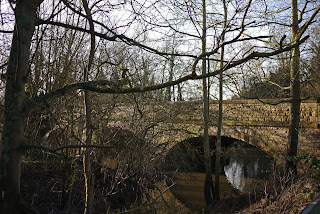 We have planned a monthly programme of Oxfordshire Way legs this year and today was the first, picking up the route at Islip Bridge, apparently the scene of a battle in the English Civil War.

You walk up the hill and soon turn left to walk across fields towards Noke. The ground was pretty frozen, so progress was quite easy.

Noke is a small, well-ordered village with a pretty church described by Pevsner as "rustic and homely". It is 13th century, with later changes and the usual 19th century restoration. 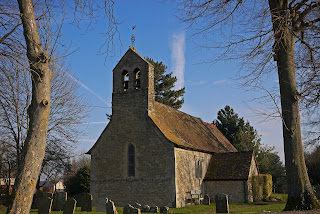 Nearby is the charming former schoolhouse, with the school bell over the front door and a droll weather-vane showing a master chasing his pupils. There is a substantial modern extension at the back. 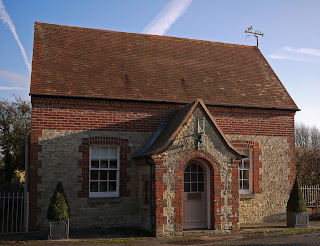 On Leaving Noke you skirt the edge of the vast (well, 400 acre) marshy plain known as Ot Moor, fed by the river Ray and containing a military firing range, which adds to its inaccessibility. It has a ring of small towns and villages around its perimeter - Noke is one and our next destination, Beckley, is another. 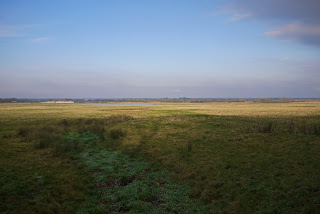 We skirt Noke wood, where we are told by a woman walker, in rather a scolding voice, "you should be wearing Wellingtons". We are not much impressed by this, but greet her and her family civilly notwithstanding. The we climb to reach Beckley and St Mary's church. 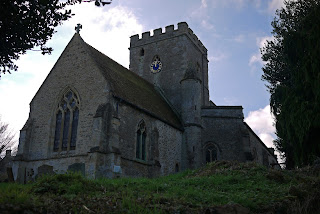 I learn from Pevsner that it is a Norman church rebuilt in the 14th or 15th century. The interior contains some interesting 14th century wall paintings, including the remnants of this Last Judgement: St Peter and St Paul are either side of the tower arch. The coat of arms above is later. 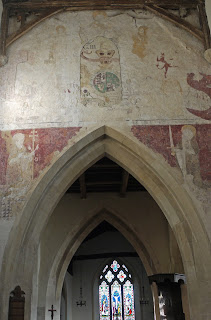 We leave the village to emerge onto high parkland overlooking Beckley Park. The house dates from 1540 and is "the best preserved small house of this date in the county" (Pevsner).

The view east stretches towards the Chilterns. 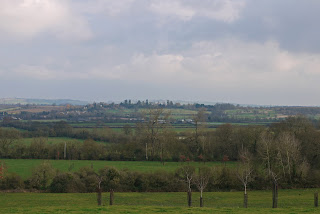 However, our immediate route led downhill to a large field, now on Otmoor, and described by our Guide as "often boggy". Today, this was an understatement - a much higher bogginess rating was called for. It was in fact virtually under water. The wellington warning was now seen to have been well-founded, but it still could have been delivered in a nice way.

We enjoyed a small herd of deer racing across the field ... 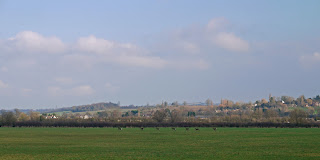 ... but the next mile or so across this and the next field until we reached a road was anything but fun.

The final section, via more but drier field paths, brought us to Danesbrook Farm and thence to Menmarsh Guide Post where we had left the car. We had a late lunch in nearby Stanton St John and enjoyed this simply fantastic sunset to round off our day out. 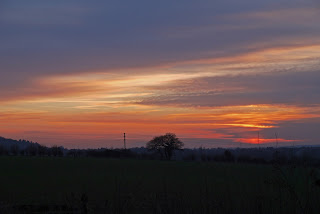 Conditions: quite cold, but mostly bright.

Rating: three stars (half a star more on a less boggy day).
Posted by PH at 23:14 No comments: 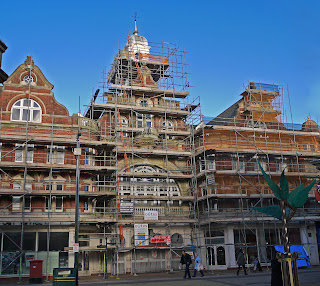 The perfect conditions for a New Year's Day walk, but after yesterday's rain we decided to have an urban one and complete our exploration of Bournemouth: we had already done the Bournemouth Coast Path and a city walk around the centre. I planned a circular walk starting by Boscombe Pier, but the car park there was already full when we arrived and so we ended up in Hawkwood Rd near the centre of Boscombe.

The first main sight was due to be the Royal Arcade and the adjacent former Hippodrome (originally the Grand Theatre and now the O2 Academy). As the photo above indicates, both buildings, which date from the 1890s are in course of being restored, which although frustrating, is very welcome.

Opposite is a more or less contemporary block with a nice first floor arcade. 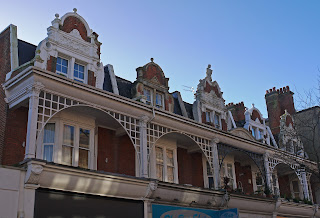 On the central gable is a statue, generally thought to be of The Devil - or possibly a devil. In researching this walk I found suggestions that it was a mark of disapproval of the building opposite. And as I was taking my photo, a man standing outside the betting shop very kindly came over to recount the same story. 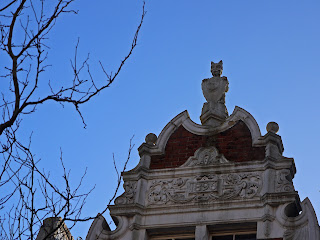 We now walked along Christchurch Road towards Bournemouth and turned right into Walpole Rd and then left into St Clements Road and St Clements Gardens to see what remains of the Convent of the Sisters of Bethany (it was also an orphanage until 1939). It was built by Richard Norman Shaw in 1874-5: "his sister was a Sister" comments Pevsner. 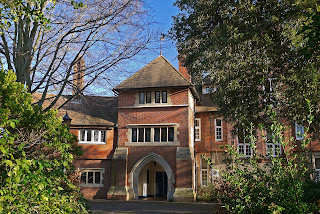 The Society of the Sisters of Bethany is a religious order for women within the Anglican Communion founded in 1866. When the Sisters decided to relocate in 1986 (to Southsea), the building was bought by the Council. It now seems to be sheltered housing.

The nearby chapel dates from 1928-9 and has a nice statue of St Etheldreda. Wikipedia reveals that she was the founder of the monastery at Ely in 673. 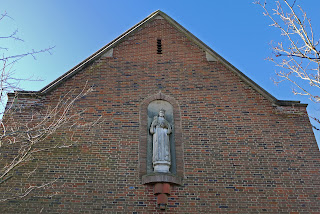 A stone's throw away is St Clements Church of 1871-3 by John Dando Sedding and built wholly in Bath stone. The west front is especially striking with the flowing tracery and statue of the saint in the window over the door. 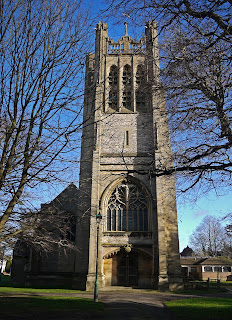 Now left into Knole Rd to see the former Knole House, also by Sedding, now the Freemasons Hall. Pevsner, writing in 1967, is quite enthusiastic about it, but something terrible has happened in the ensuing years. The original house seems to have been partly engulfed by a brick box about the size of a squash court. 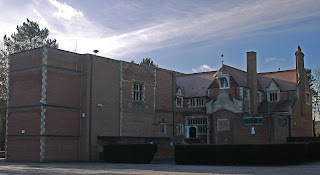 Who could have done such a thing, and why? And how on earth did they get planning permission?

At least it was possible to wander round the outside and see some quite appealing stone carving. 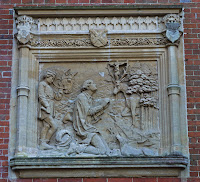 The bottom one, over what was presumably once the main entrance, offers the generous  sentiments "none come too early" and "none return too late".


Southcote Rd and Derby Road brought us to Lily Langtry's house, now the Langtry Manor Hotel, built for her by Edward, Prince of Wales in 1878. 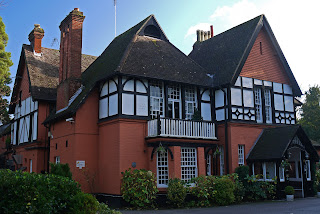 Just to the left of the main window the Latin words stet fortuna domus have been inscribed. Googling reveals an English translation of Let the fortune of the house stand. That doesn't sound like very good English to me, but it is also apparently also the motto of Harrow School.

Now we returned to Christchurch Rd and headed towards the Lansdowne roundabout, with the handsome tower of the Municipal College and Central Library of 1912 (FW Lacey) looming over the buildings and trees. 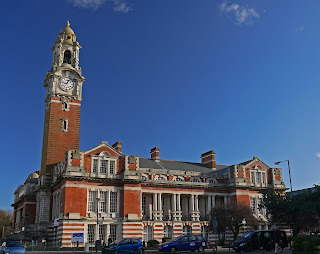 This very characteristic Edwardian public building is now part of the University of Bournemouth.

Old Christchurch Rd leads into the centre of the town and - if you look up - has a number of interesting buildings. Firstly, the projecting upper storeys of this late Victorian terrace ... 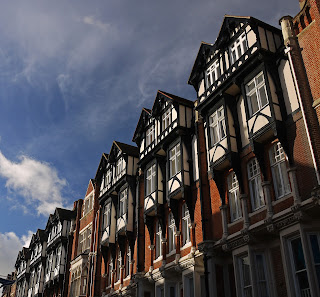 ... the this fantastic shop facade. I am guessing at turn of the 20th century, but I can't find out anything about it. 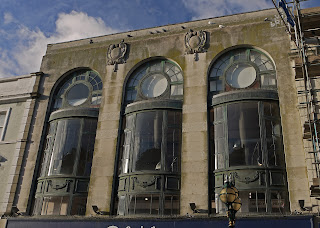 And finally, the entertaining art deco detailing on the side of Debenhams. 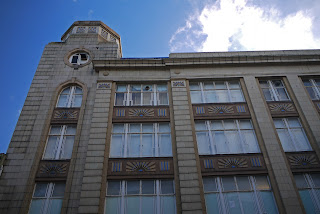 After an excellent tapas lunch at La Tasca, we headed down to the sea front to walk back to Boscombe. We started on the beach itself, with clear views towards the Isle of Wight and Hengistbury Head. There were a surprisingly large number of people on the beach and a few surfers in wetsuits. A couple of teenagers were splashing fully dressed in the cold water. Oh to be young again - although I think I would have had more sense! 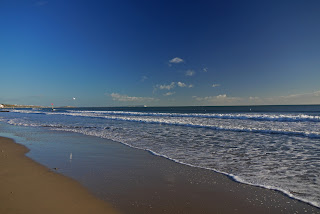 Further on, we retreated to the promenade at the back of the beach, where we enjoyed the sight of the sandstone cliffs in the warm sunshine. 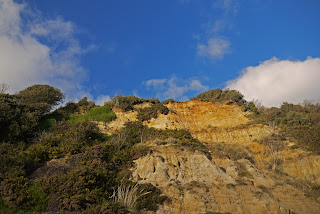 At Boscombe's ugly pier we walked up Sea Rd, past the wonderful San Remo Towers and back to the start. 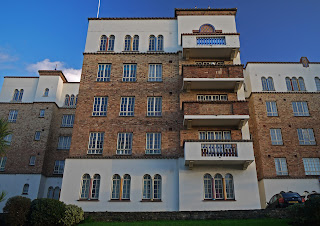 Rating: three stars. Some interesting sights, albeit not always as well preserved as one might like, and a wonderful combination of town and coast.