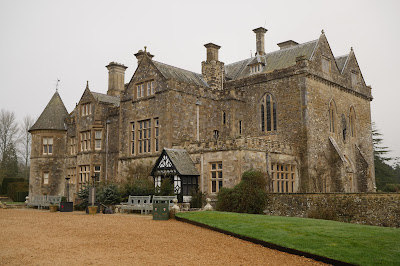 We were on our way to Poole for New Year and decided to stop off on the way to explore Beaulieu. It was quite quiet and we were delighted to be able to buy a ticket which did not include the Motor Museum, so our visit got off to a good start, despite the misty weather.

We followed the main path in the direction of the ruins of Beaulieu Abbey. It was founded in 1204 on land given by King John to the Cistercians and dissolved with other abbeys at the Dissolution of the Monasteries in 1538. When the abbey was dissolved, it was sold to Lord Montagu’s ancestor, Thomas Wriothesley. Some of the stone was used to build coastal castles such as Hurst Castle.

We first came upon this interesting ruined structure, apparently once used for fulling (improving cloth). 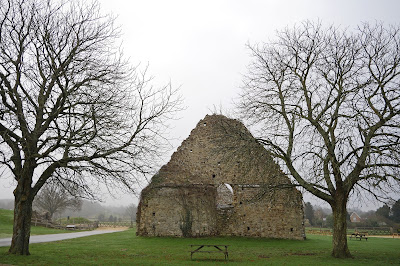 A little beyond it lay the Domus, one of the best-preserved parts. It once housed the brothers' refectory and dormitories. Some of the timbers have been dated to 1440. 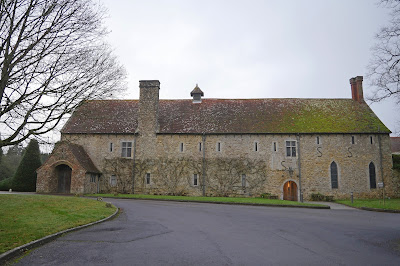 To its left is the site of the abbey church, it was once 336 feet long and 186 feet wide, the largest Cistercian church in England. The arch on the right leads to where the cloister once was, in its usual position on the south side of the church. Not much remains today, but on the far side is a building which was once the Choir Monks' Refectory. 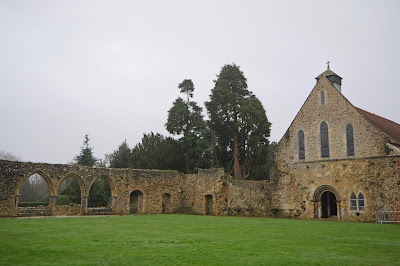 This building, which dates from about 1230, is now the parish church of Beaulieu. It seems to have become the parish church immediately after the Dissolution. It is a lovely building, no doubt much altered through time. The wooden ceiling may date from the 18th century. 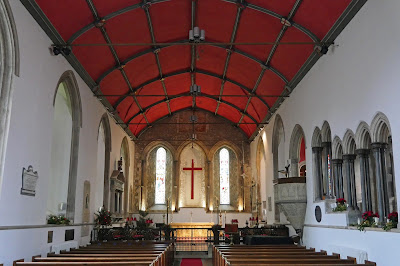 We now went into the Domus and found the upstairs to contain a single large hall with rather lovely wall hangings by Belinda, Lady Montagu. She was the first wife of the best known Lord Montagu of Beaulieu (the 3rd Baron, 1926-2015). 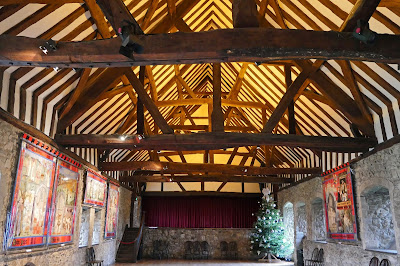 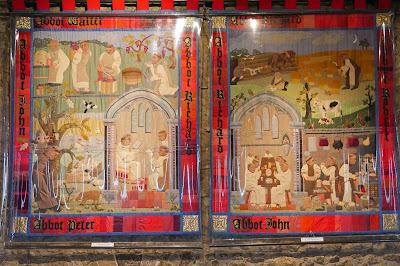 Now we moved on to Palace House. From the side view this looks like a Victorian mansion and in fact it was mainly built by Arthur Blomfield in 1872. 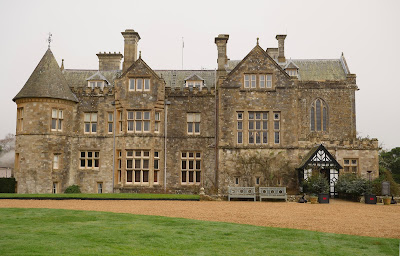 However, when you go inside you discover that the origins of the house lie in the gatehouse of the abbey, which dates from the 14th century and was later converted into a hunting lodge. The Lower Drawing Room, with its fine 14th century vaulting was once effectively the road into the abbey. 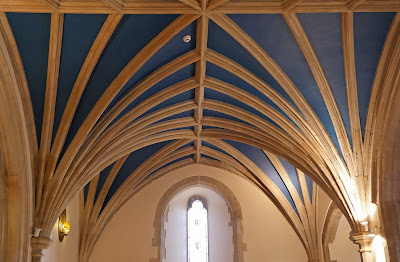 This continued through what is now a fireplace into the Dining Hall, which also has a lovely vaulted ceiling. To my mind, these two rooms were by far the most interesting in the house. 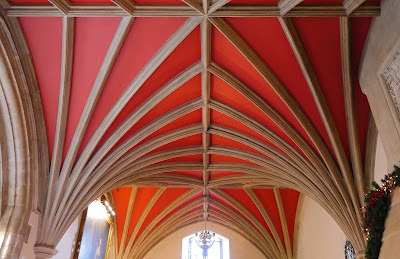 Outside there is an Outer gatehouse which Pevsner dates to the 13th century. 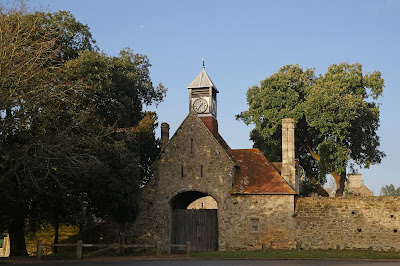 Having completed our tour of the abbey ruins and Palace House, we returned to the car and headed round to Beaulieu village to walk two miles along the Test Way to Buckler's Hard - along with lots of other people.

After leaving the village the track passes between fields and then goes past Bailey's Hard, where ships were once made, and this nicely restored house, once an 18th century brickworks. 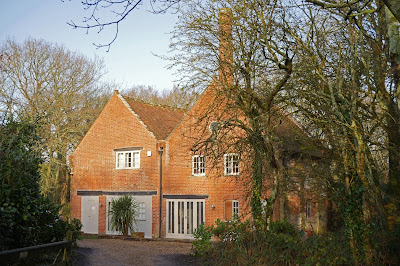 We now entered a woodland, with the Beaulieu river over to our left. The sun streamed through the trees in a wonderfully atmospheric way. 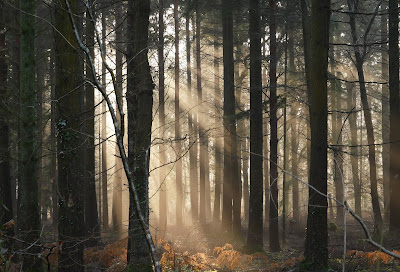 Eventually we emerged onto the river bank, where I enjoyed the bright reflection of this highly coloured dredger or whatever it was. 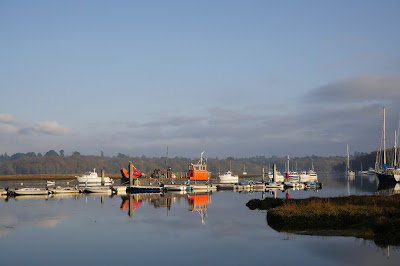 Soon we were in Buckler's Hard. According to the Beaulieu River website Buckler’s Hard was created in the early 18th century by John Duke of Montagu, who planned to build a free port on the banks of the Beaulieu River for the import and export of sugar from the West Indies. From the 1740s the site was used for the building of over 50 wooden ships for the Royal Navy, some of which were involved in the Battle of Trafalgar in 1805.

What you see now are two terraces of red brick houses facing each other up a slope at right angles to the river. It is a fine sight. There is also a pub, a chapel, a cafe and a small maritime museum. 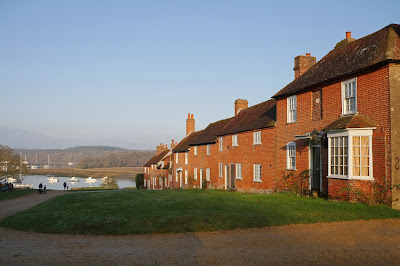 After looking round we retraced our steps back to Beaulieu, this time able to photograph the Duke's Bathhouse, built in 1760 by George, Duke of Montagu for his son who suffered from arthritis (salt water was believed to offer a cure). 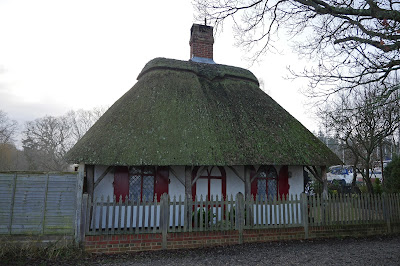 Conditions: misty at first, becoming clear and bright. Quite cold.

Distance: a bit over 5 miles.

Rating: four and a half stars. A fascinating place to visit. Presumably five stars if you like cars.
Posted by PH at 15:34 No comments: 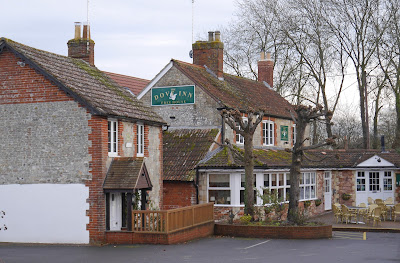 We set out from the Dove at Corton, wher we had enjoyed an excellent lunch at the end of the previous stage of this walk. A left and a right brought us to a green path heading uphill to the south. This is the view back from near the top. At the top we turned left and enjoyed a lovely view of the hillside sloping back down towards the Wylye Valley. The trees on the far side were especially pleasing. 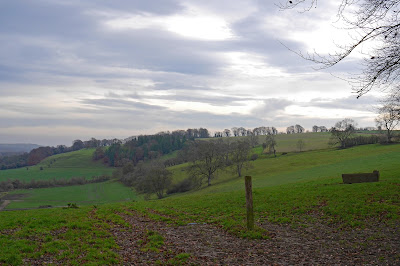 We followed a farm track as far as Corton Filed Barn, where we turned right (south) and followed a broad track offering fine, if hazy views towards the west. 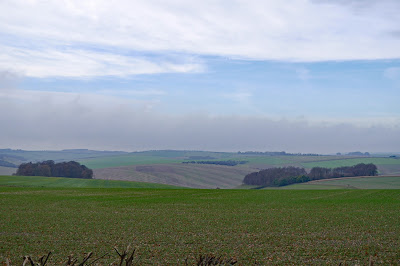 Pausing to find a hedge to go behind, we found this wonderful sign: Floristically Enhanced Green Margin. We imagined some poor florist dutifully planting loads of seedlings. 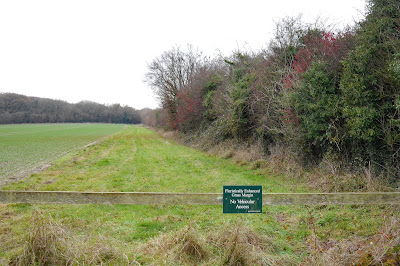 A bit further in we had a better view of the combe we saw earlier - it is clear from the map that it is     Whatcomb Bottom. 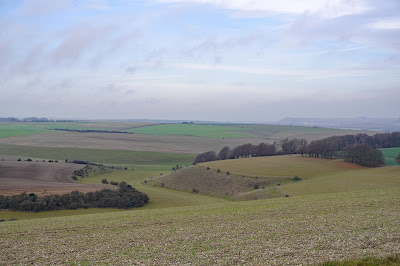 We continued on the same line and headed into what the map suggested was going to be a large, dense forest, Great Ridge. In fact it was more widely planted than we had expected and quite straightforward to navigate, if not especially photogenic.

This is the view back once we emerged on the other side. The sun had come out to welcome us and the sky was clearing somewhat. 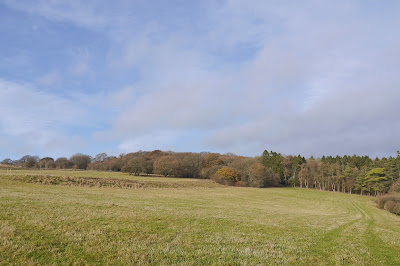 We walked down to the busy A303 which we crossed without mishap and climbed along a muddy track towards Hindon. There was a nice view back once we reached the next ridge.\ 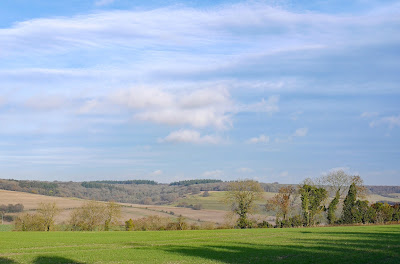 We headed downhill into the village, passing the church of St John the Baptist (T H Wyatt, 1878). Pevsner says that the village was created by the bishops of Winchester in about 1220 and soon had about 150 houses. It was built all along the road from Salisbury to Taunton. Most of it was rebuilt in stone after a fire in 1745. It is very harmonious and attractive. 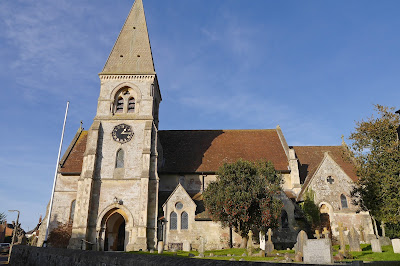 At the crossroads was the Lamb pub where we had an enjoyable lunch. 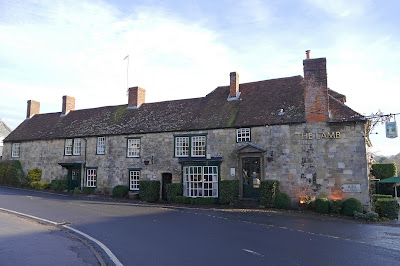 Conditions: not too cold, cloudy then brightening up.