There are 15 National Trails (13 in England and 2 in Wales). They include such celebrated routes as the South West Coast Path, the Cotswold Way, the Ridgeway, the Pennine Way and Offa's Dyke Path. Together they account for 2,500 miles of long distance path. There are some notable exclusions too, e.g. Alfred Wainwright's Coast to Coast path.

They are currently mainly funded by central government and administered by Natural England, which has a National Trail Officer responsible for each one.

Driven by funding pressures and by central government's desire to "see more devolved and locally responsive solutions to public service provision", Natural England has reviewed the National Trails and gone out to consultation with proposals to devolve management of the trails to a number of local Trail Partnerships. The consultation closed in July, but the document is still available here.

The Ramblers and others feel that there is great danger in this devolution. There are three obvious risks:
The Ramblers' have produced their vision for the National Trails.   It centres on the creation of a new national charity, the National Trails Trust, which would oversee the whole network of trails and so address the risks described above. It would also seek to expand and develop the network of trails.

It seems eminently sensible, but to bolster the rational argument, the Ramblers is asking people to sign a petition urging the government to rethink the proposals.

And when you've signed, get your friends to do so as well by clicking here.
Posted by PH at 23:21 No comments: 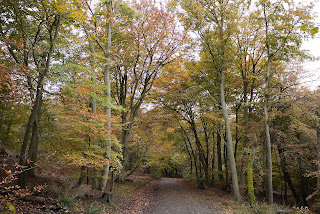 A combination of work and family commitments has meant that I have only done one walk in the last month - a wonderful city walk around art nouveau Vienna. Things have calmed down now and hopefully normal service can be resumed. I decided to start with my annual autumn walk around Burnham Beeches - last year I included Hedgerley.

I found this route on the website of the Blackwood Arms in Littleworth Common, it seems to originate with the AA. Well done to the pub for promoting walking! You start at the main car park on the edge of Farnham Common and walk into the Beeches, initially following the tarmaced Halse Drive (above).

Quite quickly you turn left into the quieter, stony Victoria Drive. 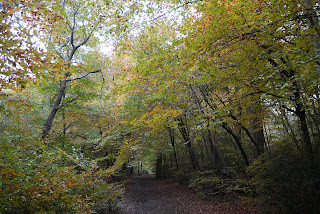 The instructions describe turning right at a path junction and refer to a tree carving "Andy 6.9.97" as a landmark. Some wag has amended this to Randy. Ho ho. This next section goes through a clearing to reach Park Lane, which you cross to take a field edge path and the turn right onto a track leading to Littleworth Common. A handsome Georgian (or at least Georgian-style) house can be seen to the left. 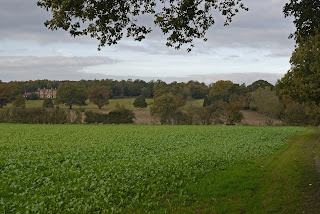 It's not named on the map and Pevsner for Buckinghamshire offers no information. Annoyingly for me, he does reveal that Littleworth Common's church is by William Butterfield, one of my favourite Victorian architects. If only I had known I would have made a detour to see it.

You cross the common to pass by the Blackwood Arms pub, which looked inviting, although I managed to resist. The route now follows the Beeches Way, a 16 miles route from the River Thames near Cookham to the Grand Union Canal at West Drayton. It passes some paddocks and enters Dorney Wood to become indistinguishable from Burnham Beeches as you cross Park Lane again to re-enter it. 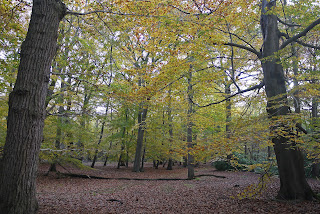 The AA route now follows Halse Drive back to the start, but I headed left along McAuliffe Drive to pass the "moat" marked on the OS map. It looks like a shallow rectangular ditch. 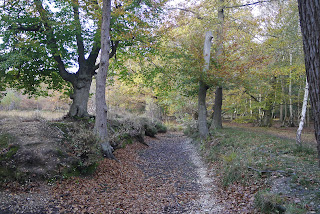 A helpful information panel reveals that it is Hartley Court Moat and that it once surrounded a moated Farm House built between 1250 and 1350.

McAuliffe Way curves round through a quiet corner of the Beeches. I crossed Dukes Way to follow a pleasant unnamed track to reach the end of Halse Drive. 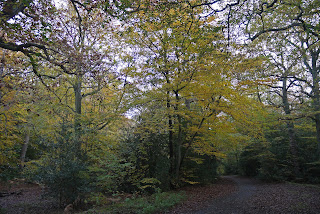 Rating: three and a half stars. I suppose the core problem is that Burnham Beeches is not very big, so walks tend to extend outside it. However, the surrounding area is not especially distinguished. 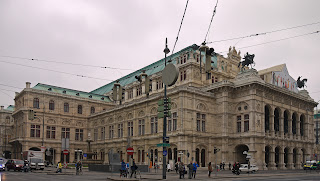 We first visited Vienna in 1997 and were completely bowled over. Now we are making a family visit and we decided to re-do a walk that we did then which is still vivid in our memories: fin de siècle Vienna.

The walk begins at the Opera House. It is located on the inner Ringstrasse built in the mid 19th century on the line of the old city walls and was one of the first buildings to be constructed in this massive, and controversial, urban renewal programme. We crossed the ring, known at this point as the Opernring, walked along a bit and turned left to reach the Fine Arts Academy. 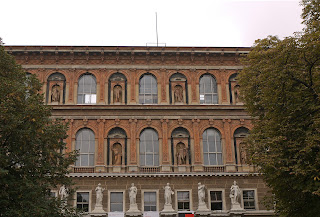 It was also part of the Ringstrasse and was built by the Danish architect Theophil Hansen in 1872-1876 in an Italian Renaissance style. We enjoyed the terracotta panels - which are also to be seen on English buildings of the same period.

Just round the corner you come on one of Vienna's greatest buildings: the Vienna Secession building of 1898 by Joseph Olbrich. It was originally the exhibition hall of a group of artists, of whom Klimt was the most famous, who rebelled against the conservatism of the Austrian Academy.  Klimt in fact resigned from the Secession a few years later, citing artistic differences. 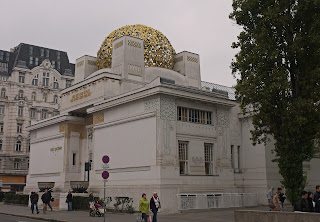 Although normally regarded as one of the first modern buildings, it is to the present-day eye still remarkably and beautifully decorated. On the side this rather geometrical-looking panel suddenly, when you get the angle right, reveals itself to be a trio of owls. It is credited to Koloman Moser. 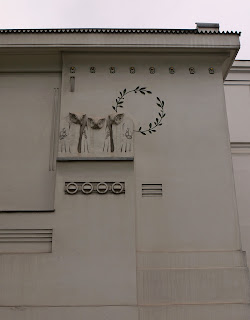 We now walked back along Friedrichstrasse to take a subway passage to Karlsplatz.  Here are the famous Wagner Pavilions (1898). The architect Otto Wagner was appointed design head for the new Stadtbahn, or metropolitan railway, now the metro, and the two fantastic art nouveau pavilions which stand facing each other, were the entrances to the Karlsplatz station.

One is now a bar, but the other has recently (well since 1997) been turned into a museum to Wagner. 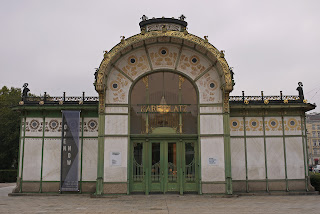 It is small but extremely interesting and the interior is as beautifully decorated as the exterior. 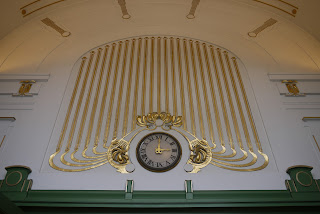 Nearby is the magnificent Karlskirche - St Charles's Church.  It dates from the early 18th century. 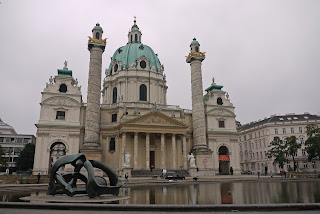 We walked on past the Technical University and admired the extraordinary facade of the modern extension which houses the library. 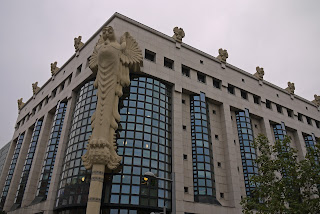 We then turned left into Operngasse and right to bring us to the Naschmarkt - a very well established street market. We carried on along the same line to see reach one of Vienna's finest old coffee houses - Cafe Sperl - where we paused for the classic combination of a glass of wine and a slice of sacher torte. 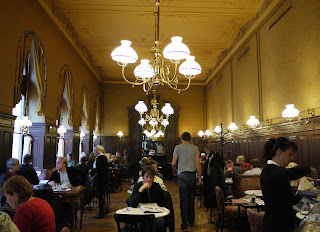 From here we looped round to rejoin the market. As you round the corner into Linke Wienzeile you see two extraordinary houses by Wagner, a fantastic culmination to the walk. 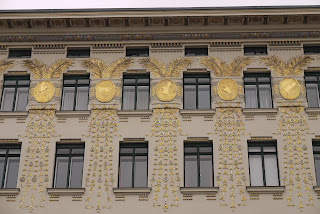 The first, with its exuberant gold decoration seems to be called the Medaillon House (1900), while the second with its floral motifs is known as the Majolika House (also 1900). 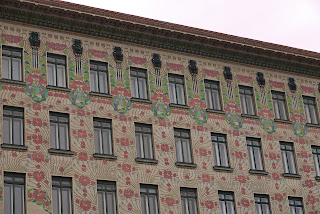 The point where they meet is especially striking, with the contrasting green balconies at the end of the Majolica House and the overlooking statue of the Medaillon. 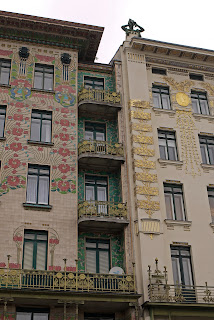 Rating: Five stars. A small number of absolute gems, and a few other random treats for good measure.
Posted by PH at 22:59 No comments: