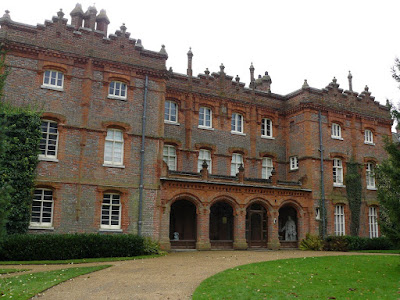 
This walk is courtesy of the National Trust, who own Hughenden, former home of Bejamin Disraeli. This Red Walk is one a series around the estate. It can be done separately from visiting the house.

The walk begins in the car park and leads quickly into beautiful beech trees of Woodcock Wood .... 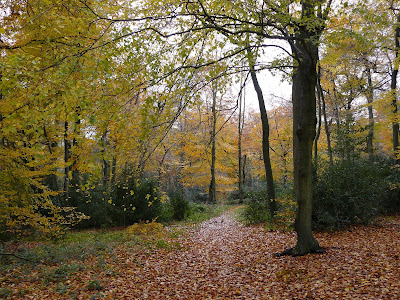 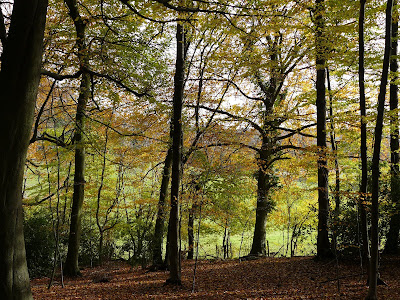 Leaving the wood, the path goes across open fields and then enters Flagmore Wood and then Common Wood. Emerging from Common Wood, you take a short stretch of semi-suburban street before entering further woodland, emerging this time by the Disraeli monument, on a hill overlooking a valley and with Hughenden Manor visible on the other side. 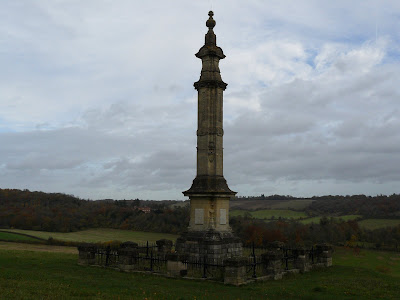 The monument was erected by Benjamin Disraeli in honour of his father, Isaac D'israeli, a writer and scholar. Isaac changed the names of his children to make them seem less Jewish - and also had them baptised, which in due course allowed his son Benjamin to enter Parliament. 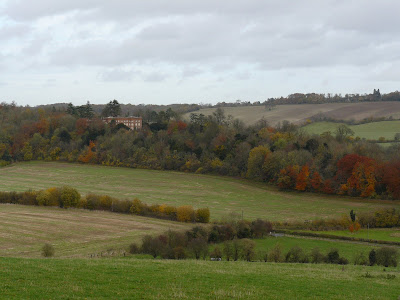 Hughenden seen from near the Monument

You then descend from the monument and climb the other valley slope to enter the grounds of Hughenden Manor, paasing to the south of the rear of the house, and round the side to pass the Victorian church and return to the car park. Four miles in all. 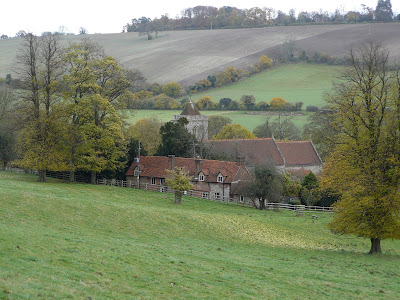 Hughenden Manor was bought by Benjamin Disraeli in 1847, shortly after he became Member of Parliament for Buckinghamshire. He made major changes to the house and gardens, and lived there happily with his wife Mary Anne, as his political career flourished, becoming Chancellor of the Exchequer and then (twice) Prime Minister. He was made Earl of Beaconsfield in 1876, and in the following year entertained Queen Victoria at Hughenden.

The house and the estate were acquired by the National Trust in 1947. The interior of the house is much as it was in Disraeli's time, and many of the original contents remain. The formal garden, a terrace with attractive views around, has been recreated to reflect Mary Anne Disraeli's original design. 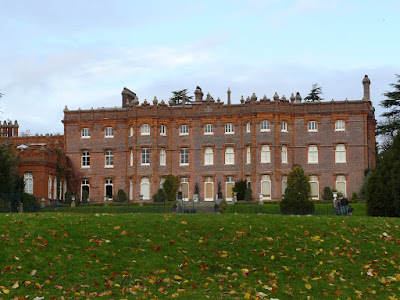 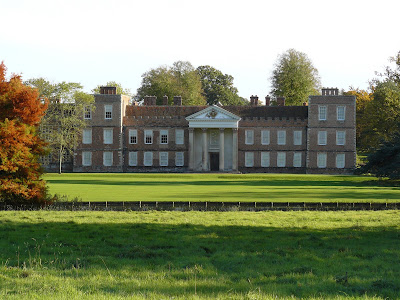 
This short, but wonderful walk, comes courtesy of the National Trust and can be downloaded here. Although only 2.3 miles, this walk packs a lot in. The walk starts at the edge of Morgaston Woods and initially takes a straight line through the woods to come the edge of the lake which backs onto the house itself.

The initial paths are concrete and according to the walk notes were constructed during the second world war to act as a decoy for enemy bombers and distract them away from the munitions depot at nearby Bramley. At this time of year the concrete is covered by a carpet of leaves and could be any woodland path: 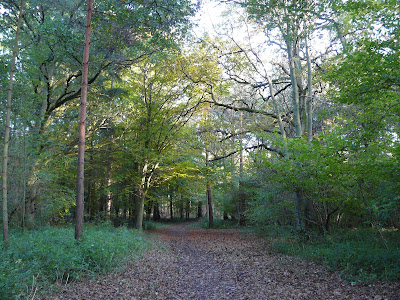 On reaching the lake, the path turns right and comes to an area of wetlands, where there is a hide to watch the wildflowl and wading birds that congregate there. 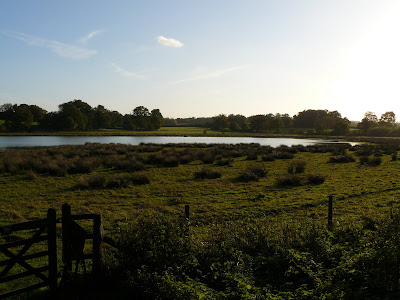 A zoom photo reveals a pair of herons on the far bank. 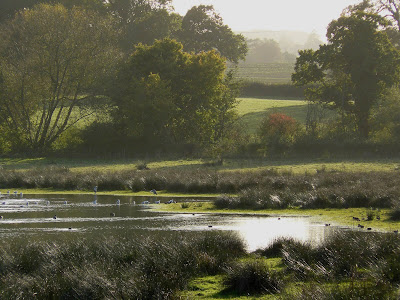 The Vyne that we see today is, perhaps surprisingly, only a part of a what was once a much larger Tudor house. It was created in the early sixteenth century from a number af free-standing medieval buildings: the lawn at what is now the rear was once a series of Tudor courtyards in the style of Hampton Court.

The classical portico was of course added later, around 1660, and the staircase hall was remodelled in a classical style at the same time - and is rather discordant with the rest of the interior. The chapel is notable for its beautiful glazed Flemish tiles. 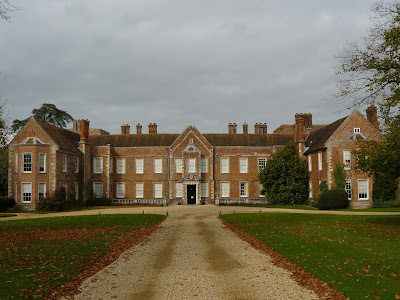 In the grounds there is a delightful seventeeth century brick summer house and the six hundred year old "Hundred guinea oak", so named because one of the Vyne's owners allegedly refused that sum of money for its timber. 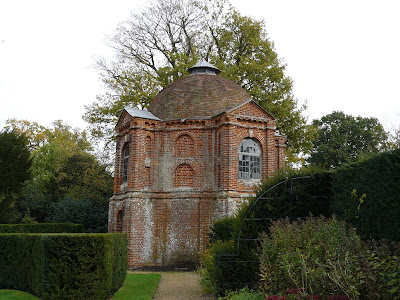 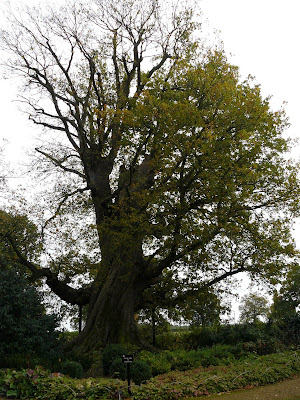 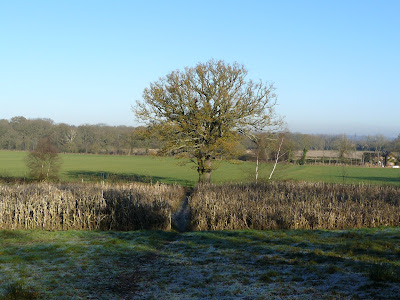 The walk initially follows the delightfully named Pudding Lane from the recreation ground in Arborfield and emerges onto the A327 which you follow for several hundred yards. A lane and then fields leads south to a plantation (New Plantation) and a climb up Kiln Hill to the village of Farley Hill.

From here the route wends across tracks and fields back to Arborfield. Four and half miles in all.

Rating: three stars. Surprisingly rural for a walk so close to Reading, and quiet varied, but lacking any major points of interest.

I saw what I thought was a Little Owl perched on the top of a tree as we drew near to Arborfield. The binoculars revealed that it was in fact a cunningly shaped clump of dead leaves, so a bit disappointing. But I was granted what might be seen as a blinding glimpse of the obvious - you can see birds more clearly when there are no leaves on the trees! There may not be so many birds about but it means of course that winter is a good time to improve one's bird identification. I have now packed my bird book in my haversack.
Posted by PH at 18:24 No comments: 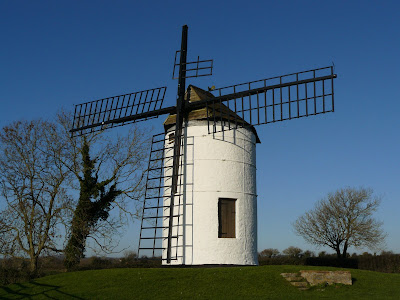 A rare self-designed walk constructed from an examination of the OS map. The walk begins in Stone Allerton with a footpath near the pub which heads south west towards the levels. Initially you pass beside some fields of elephant grass.... 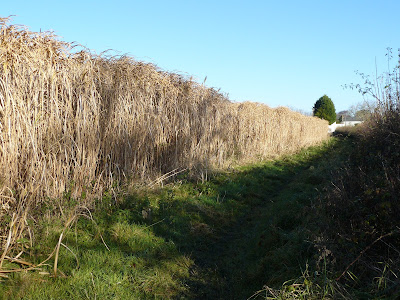 ...and then emerge on a track beside fields. A short distance along the road, another path across fields leads down to Allerton moor - an area of low-lying fields. The track follows the edge of these and offers surprisingly clear views of Brent Knoll, some way to the south. 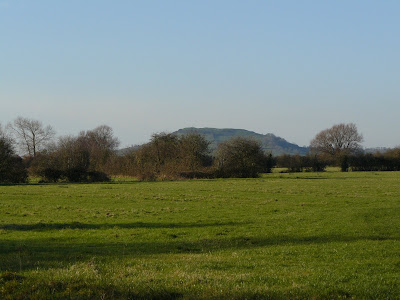 The track eventually reaches the Allerton Moor rhine (one of the characteristic drainage ditches which criss-cross the Somerset levels). Looking back along the rhine, you can see Crook Peak, on the Mendips, in the distance. (Note also the photographer's shadow in the foreground.) 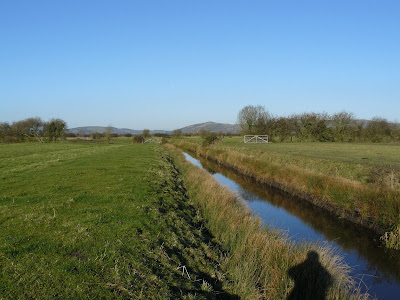 After a mile or so, I turned left along a lane towards Chapel Allerton, passed through the village and reached the Weare-Wedmore road. A short detour here brought me to the Ashton windmill - I have been past many times, but until today never stopped for a closer look.

Then back along the road to the start. About five miles in all.

This is an eighteenth century corn mill, of a type known as a tower mill. The picture below shows it from the side. It's not quite clear to me what the over-hanging section at the back is for: there seems to be scope for a pulley. 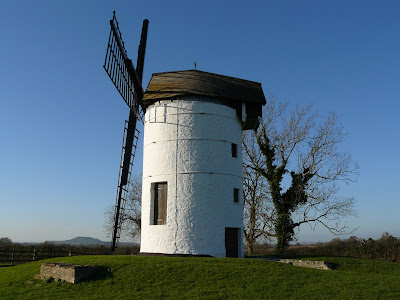 More about windmills can be found at Windmill World and UK Mills. The helpful page on the history and development of windmills at Windmill World explains the three basic types of mill in their evolutionary sequence: post (where the whole body of the mill rotated around a central post to face the wind), smock (where the wooden body of the mill is fixed and only the cap, containing the roof, the sails, the windshaft and the brake wheel, rotates) and the tower (like the smock mill but with a brick body).
Posted by PH at 18:31 No comments: