There was a lot of coverage in the press recently of research done for the mental health charity MIND by the . The Daily Telegraph reported it under the headline “A walk in the country may beat depression”. The research showed that walking in the country was associated with increased self esteem, while a comparable walk around a shopping centre led to decreased self esteem for many of the participants.

What are we to make of this? I sought out the MIND report “Ecotherapy – the green agenda for mental health” to find out.

First of all, I must congratulate MIND’s PR people for getting so much coverage in the national press – no mean feat. But I wonder if the coverage and the report might contain some elements of a shot in the foot.

The research looks to be seriously flawed. It was based on a sample of “20 members of local MIND associations” who took part in two walks, a week apart. The first was 30 minutes around a country park and the second 30 minutes around a shopping centre. They were asked to complete a questionnaire before and after each walk and the findings are basically the before and after comparisons.

The main problems appear to be threefold. Firstly, 20 is a very small sample on which to base conclusions which are intended to inform national policy making. Secondly, there is no information on the baseline mental state of the participants – which would surely inform how they responded. Thirdly, all you can really conclude is that as a leisure activity walking in a park is better than walking around a shopping centre, which is hardly a shock. It’s a big leap from there to say that ecotherapy should replace anti-depressants.

What is “ecotherapy” anyway? It seems to be any of gardening, conservation activities or walking (or indeed running or cycling). What is quite interesting however is that searching the website reveals an interesting presentation by Professor Jules Pretty, who appears to have done the MIND research, which uses instead the term “Green exercise”. One of the slides explains that there is evidence that physical activity is known to have a positive influence on physical and mental health and exposure to nature is known to have a positive influence on mental health. The team coined the term Green exercise, hypothesising that there should be a synergy if the physical activity takes place while being directly exposed to nature. 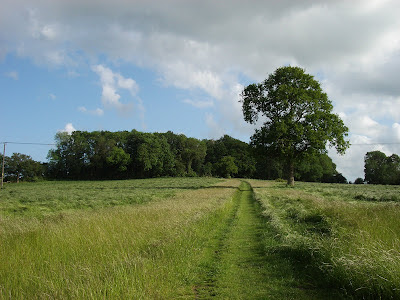 Five o'clock and the rain has finally stopped - just time for a quick walk before dinner! This walk starts in the village of Farley Hill and circles through fields and quiet lanes to return there 5 miles later. It just touches the river Blackwater at one point, but you can't see much of the river. Chill Hill is not much of one, but there is a nice view in the foreground and Reading on the horizon. 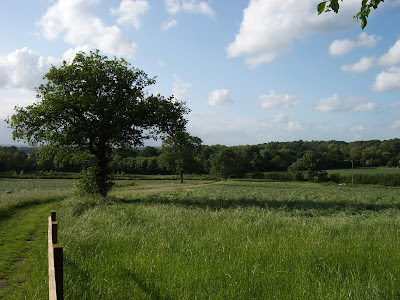 How green and bright it all is after rain, how good to get out after being trapped inside by the same rain - nothing very original. Struck by how lovely a field with lots of buttercups can be. 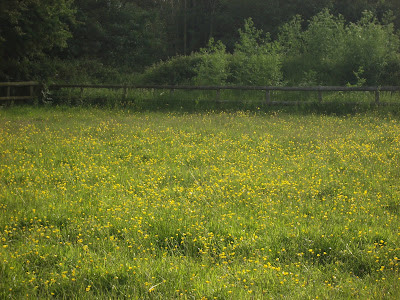 One of my goals is to become more aware of, and informed about, all there is to see while out walking. Today I was very conscious of how many foxgloves there are about and how intricate the patterning is on the inside of the flowers. 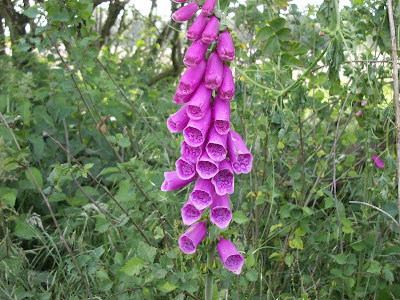 
There is also so much wildlife that you take for granted: squirrels, rabbits, partridge, pigeons, robins, and so on. So part of the fun is seeing, or at least noticing, new and unusual things. Today, a tawny owl and pair of yellow wagtails. I also enjoyed meeting these cows, who were not impressed at having their domain invaded. 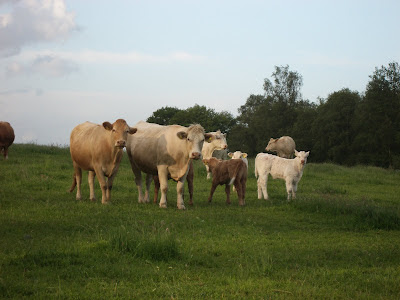 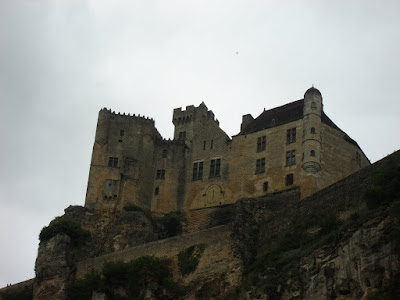 The walk begins in the car park at the edge of Beynac, climbs to skirt the edge of the chateau and proceeds uphill leaving the town behind and passing through woods (see below - note the yellow waymark on the tree). 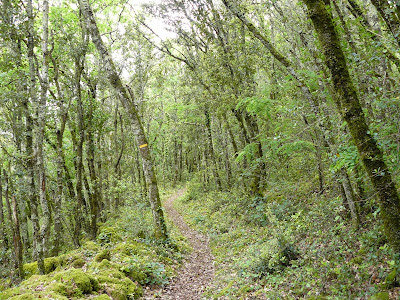 From here the path descends into farm land, and the picture shows the precise point where we lost the path for a while. The usual story of over-confidence. 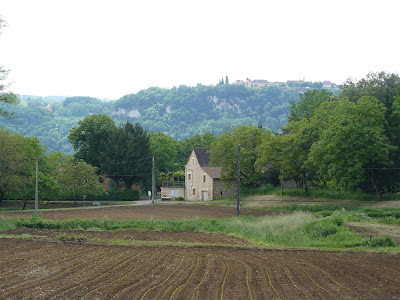 Having regained the right path, the return leg meanders through the rich farming land in the centre of the river valley. The rocky promontory on the opposite bank with the pretty village of Domme 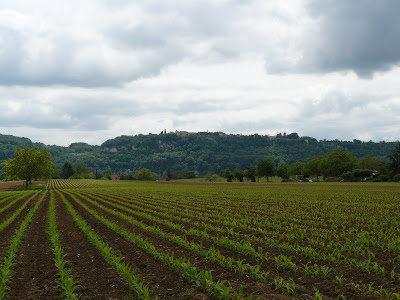 Farmland in the Dordogne valley 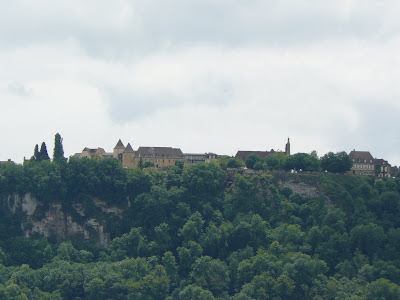 Particularly memorable was a pair of Black Veined White butterflies. Listed in UK butterfly guides, but rarely seen at home.

The chateau dates from the 12th century. The oldest part now extant is the 14th century keep. During the 100 years' war the Dordogne marked the boundary between French and English territory. Beynac was on the French side and looked across towards Castelnau on the English side.
Posted by PH at 20:27 No comments:

This 9.5 km walk was undertaken in surprisingly cool and wet conditions - so no photos. The walk begins in the centre of Domme (213m) and then descends to the west to reach the village of Cenac, at a height of 80 m. The next phase of the walk involves a sustained but, at any one point fairly gentle, climb to 293m at a new housing development more or less due south of Domme. There are excellent views from here, albeit not today.

The return leg involves a gradual descent, but as it ultimately enters Domme through its southern gate, there is one last climb back to the start.

The key French concept of denivelisation (change of level) is highly relevant to understanding the demands of this walk!

Domme
Domme is one the Bastides - fortified villages dating from the 100 years' war. It is set on a steep promontory overlooking the Dordogne river and still has most of its 13th century walls, gates and ramparts. The views from the Promenade des Falaises are splendid. This splendid 8 km walk in the heart of the Dordogne offers fantastic views in all directions as well as sight of no less than four chateaux. The walk begins in the undistinguished village of Vezac, but then climbs to the well-known tourist site of Beynac on the banks of the Dordogne river.

The route then descends to river level and follows the left bank of the Dordogne, from which the next chateau, Fayrac, can be seen on the opposite bank. Further along, the chateau of Castelnau can be seen high above, again on the opposite bank. At about this point you leave the river and head up to the final chateau, that of Marquessac. This is an unimpressive building, but it does possess a really splendid garden. 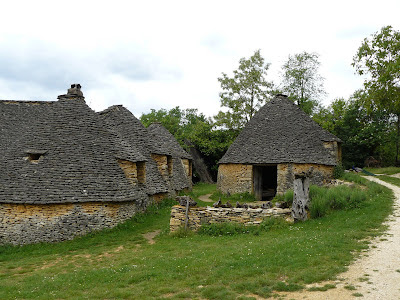 On holiday in Sarlat-le-Caneda for a week, a lovely old town in the Dordogne. In the Sarlat tourist office we found a wonderful Guide to walks in the area around Sarlat: "Promenades et randonnees en Perigord Noir Sarladais" [the immediate area around Sarlat is known as the Sarladais, part of the larger area known as Perigord Noir - black Perigord]. The guide features 32 loose leave sheets with descriptions on one side and maps on the other. The maps are 1:25000 scale reproduced from the series produced by the Institut Geographique National. Many of the sheets have more than one walk or variants of the main walk, so there is something for everyone.

We thought we'd start with something gentle. This 6 km walk starts from the car park by Les Cabanes du Breuil (more on them below) and meanders in a gentle circle up and down through woodlands and fields back to the start. Wild flowers, birdsong and cicadas for company. 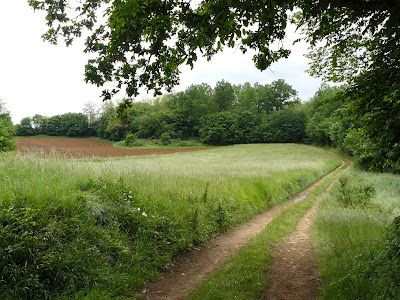 The path between Thomas and Le Breuil

Among the wild flowers we spotted several wild orchids and others we could not identify, like the blue one below. 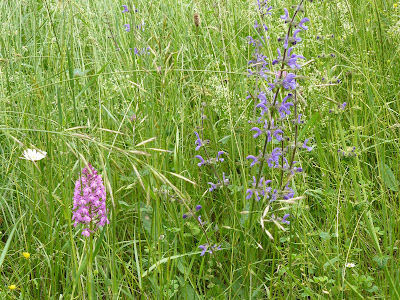 These dry stone huts are very old and were once part of monastic land. After being abandoned for many years they were reoccupied by three craftsmen at the end of the nineteenth century and 50 years ago the grandparents of the present owners began a process of restoration. More information can be found on Les cabanes du Breuil website.
Posted by PH at 17:37 No comments:

Kingsclere: Watership Down and Cottington's Hill 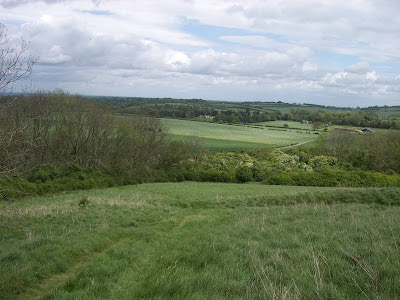 Looking back towards Kingsclere

The walk leaves Kingsclere, passing by the church and a duck pond, to reach open fields and a gradual but increasingly steep climb to the racing gallops on the ridge of the North Hampshire downs. (The view above was taken just before reaching the gallops.) You are just above the legendary Watership Down at this point. The walk then doubles back along the ridge and then descends to traverse a lower slope before the final stretch back to Kingsclere, through fields and along a lane. In the later part of the walk there is a lovely view back towards Watership Down. 6 1/2 splendid miles in all. 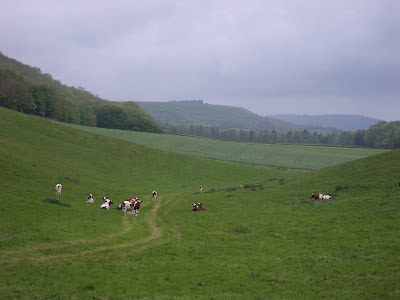 View towards Watership Down

The Kingsclere to Hannington walk shares part of the route (in the opposite direction) and so it is possible to see what the bright yellow field of oilseed rape I photographed then looks like now. As the photo below plainly shows, the answer is that it is green-with-a-hint-of-yellow. Another reason for not getting too wound up about it. 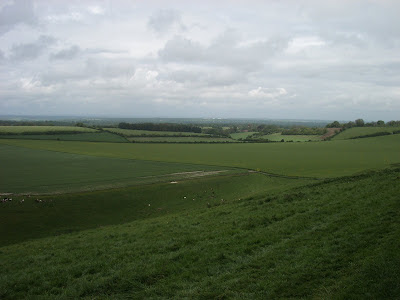 A field of oilseed rape

One of the key things about walking is learning to notice things: the details as well as the landscape. I spotted these King Alfred's Cakes just to the side of a stile. They seem well named. 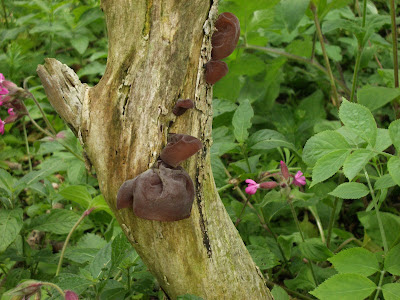 King Alfred's Cakes
Posted by PH at 22:55 No comments: 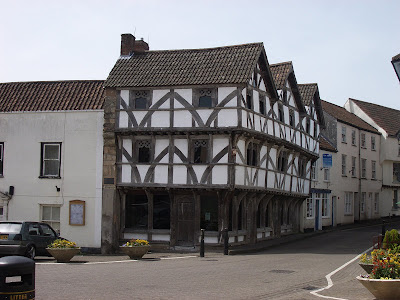 The walk starts from the small square in the centre of Axbridge, dominated by the church and the beautiful half-timbered King John's Hunting Lodge. Apparently, this is a misnomer - it was simply a rich merchant's house, now a museum. From there to the reservoir. The setting is good - you can see the whole sweep of the Mendips, but walking on a tarmac path around a largely featureless body of water leaves a bit to be desired! 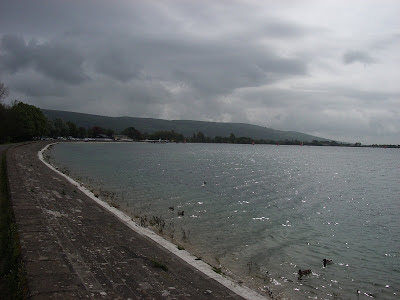 
Fortunately, the walk fairly swiftly departs from the side of the reservoir and proceeds on a wide sweep around it on a series of lanes out into the Somerset levels. The last section alongside the Cheddar Yeo and the Ellenge stream with views of the Mendips and Axbridge is especially good. In the second picture, Cheddar Gorge is the nick in the line of the ridge. 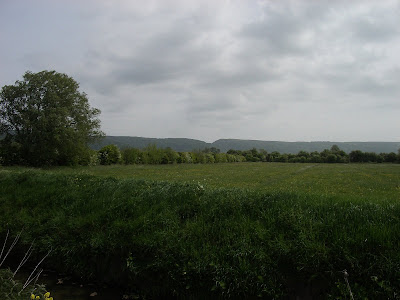 The Mendips from beside the Ellenge stream

From: Somerset, Wiltshire and the Mendips walks (Jarrold Pathfinder guides). 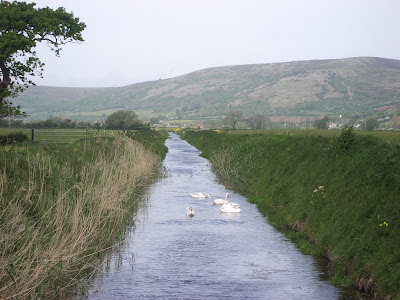 Swans on the Cheddar Yeo