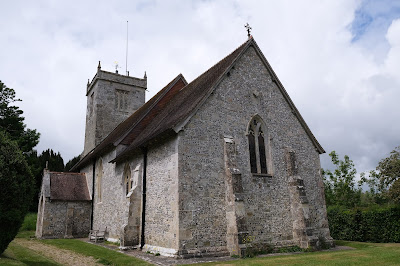 We were in this remote Wiltshire village to recce the large house we have booked for a birthday celebration - now sadly cancelled as the final stage of reopening has been postponed. Having checked out the Horseshoe Inn pub (very nice) and located the venue (very isolated down a narrow lane with no passing places), we decided to do the walk we found on the www.discoverchalkevalley.org.uk website.

We started at a spot known as The Cross and paid a visit to the church. Pevsner's account is unusually vague, but it seems to be some 13th and 14th century elements, as well as the usual 19th century work.

Returning from the church, the road to the left had a couple of lovely thatched cottages. 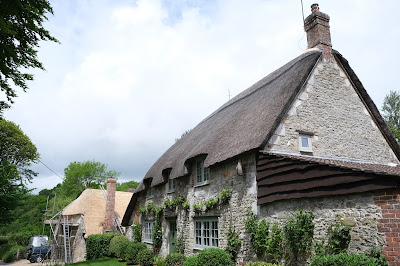 We walked downhill from The Cross and where the road turned left, took a track going straight ahead, then right uphill to reach Hill Farm. On the way up we admired this fine clump of Russian Comfrey 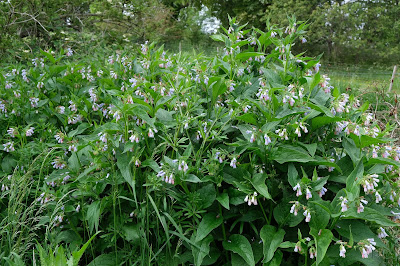 Now we headed across fields towards the larger village of Bowerchalke. We reveled in the glorious wide open spaces with a range of hills behind. 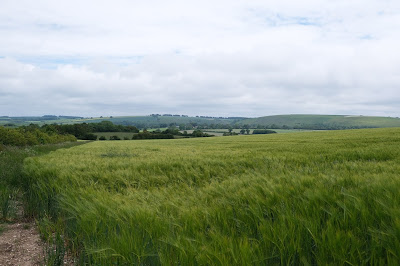 Leaving the fields behind we walked along a road into the village to reach the church of Holy Trinity. Pevsner tells us that the transepts and nave may date from the 13th century while the while is later. The chancel was rebuilt in 1866 when the south aisle was added. 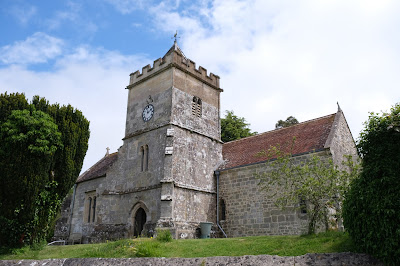 However, the main interest is in the churchyard (not mentioned by Pevsner) where you can see the graves of William and Ann Golding. William Golding was the author of Lord of the flies, published in 1953. I remember devouring it perhaps ten years later: a tale of school boys marooned on a desert island. Popular in schools, especially in the English-speaking world, a 2016 UK poll saw Lord of the Flies ranked third in the nation's favourite books from school. It was only beaten by George Orwell's Animal farm and Charles Dickens' Great expectations. 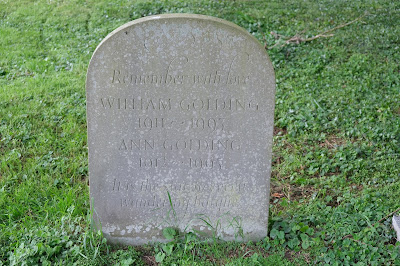 We partially retraced our steps and then took a new field path from which we had great views of the ridge where Hill Farm is located. 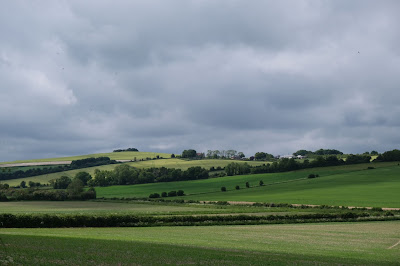 We then followed an enclosed path through light woodland and emerged on a farm track which led up to Cleves Farm. Here we joined a road which we followed downhill for about three quarters of a mile back to Ebbesbourne Wake. There were some marvelous views to the left as we descended.

Conditions: mild if rather grey.

Footnote: Ebbesbourne Wake is a great name for a village. The Ebble is a small bourne which runs through the Chalke Valley; Geoffrey de Wak was granted the manor by King John in 1205.