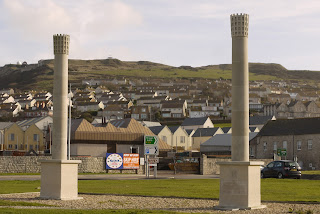 The gates of Portland

We had more or less decided to end this year's onslaught on the SWCP at Weymouth, but we saw an opportunity to keep on going, and now we hope to complete the circuit of Portland before Christmas. This would be very satisfying as for a large part of the walk so far, certainly since we turned St Aldhelm's Head, the western horizon has been closed by Portland. It will be great to continue the walk in the new year with open views to the west.

We picked up the route at Ferry Bridge and followed the causeway which links Portland to the mainland for about two miles to reach the gates of Portland above. The gates were funded by the six Masonic Lodges on Portland - a surprisingly large number we thought for a population of around 13,000.

Once on the island proper, we headed for the castle - another of Henry VIII's coastal forts, of 1539 (see also Sandford on the previous leg of this walk and Brownsea Island. This is landside view. 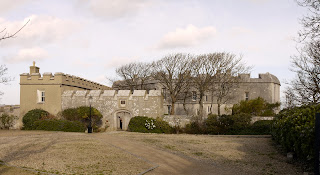 And below is the view from the shore side. In this view the tunnel entrance to the Verne citadel can be seen near the top of the hillside behind. It was initially a prison for convicts who were employed building Portland harbour in Victorian times and then became a military base; is now a prison again. To left is a large block (I first wrote "blot" - a nice slip) of flats, which had apparently been left unfinished. 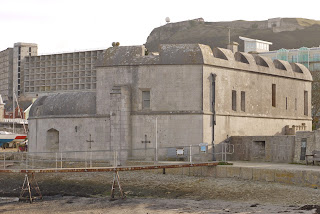 The path follows the right side of the hill leading up to The Verne and as we got higher there was an increasingly good view back along Chesil Beach, which starts at Chesil Cove on the west coast of the island and forms the west side of the causeway. It was unfortunately rather hazy. 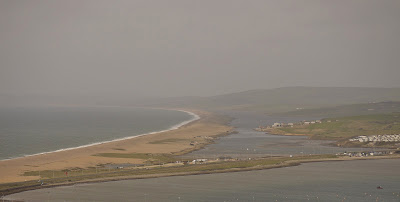 The route then follows the back of the peak, passing the route of railway lines which were once part of the Portland quarries to come to an entrance to the prison - presumably not the only one! Apparently The Verne, a category C prison (for prisoners who cannot be trusted in open conditions but who are unlikely to try to escape), is known for the large number of separate nationalities which are represented there. 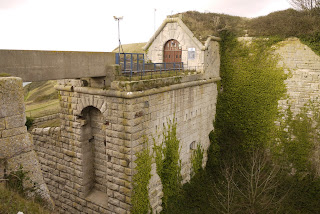 The route now heads east with a "family farm" improbably located on one side and a working quarry on the other. 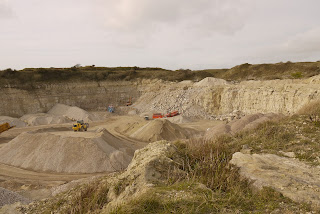 We then followed the East Weares (which I think means cliffs) and passed the Young Offenders Institution to emerge onto an open grassy area, crossed by quarry tracks which led down to the village of Church Ope. We were struck by Pennsylvania Castle which was built by John Penn, the grandson of the founder of Pennsylvania on land given by his friend King George III (who has been frequently mentioned lately). It is has recently become privately owned, but before that was a hotel. 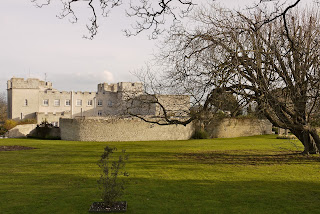 After a short section of road, the path finally descends to the coast. It is wilder and quieter here and there is a good view back towards towards white chalk cliffs of the south Dorset coast. 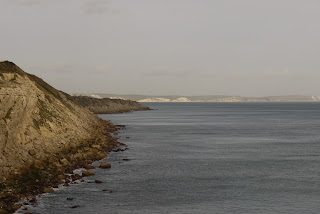 This whole area was formerly stone quarries and the evidence is everywhere. We had the rather melancholy feeling of walking through a town that has been devastated by heavy bombing, with piles of rubble all that remained.

There were several of these derricks, which were used for loading stone onto barges. 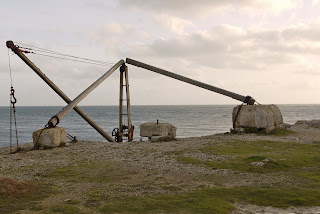 As we approached Portland Bill along a grassy headland, a whole collection of huts came into view. They looked more like garden sheds than the more typical beach huts you see in Mudeford or Weymouth. But beach huts they are. On the way back to the station our taxi driver told us that they were highly prized and changed hands for "silly money". We had more the sense of a shanty town, but no doubt it all looks different in summer.

Then as one of the three lighthouses loomed ahead and we were fading fast, we saw the Lobster Pot restaurant. At first I thought it could not be open, but we were in luck and enjoyed a reasonable, but extremely welcome meal and a bottle of dodgy sauvignon blanc. 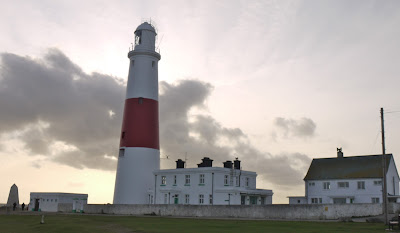 Distance: about 8 miles, all forwards on the Coast Path. Distance covered now 50 miles.

Rating: three and a half stars. Penal settlements, military remains, transport links and industrial archeology dominated the walk. Interesting, but not very pretty.