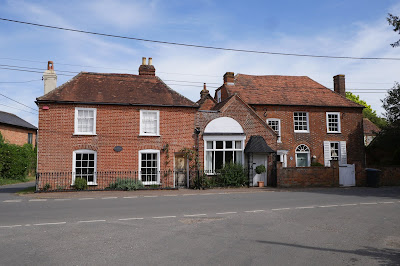 We started our walk at the small village of Ashampstead and were immediately drawn to this curious grouping of buildings on the corner of the crossroads. It looks like the middle section was shoe-horned in at some point.

On the way bay we noticed this interesting structure at the back of the house on the right. I learn from Pevsner that it is a19th century Coach House. 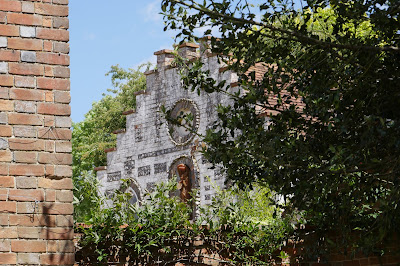 We turn left at the crossroads and walk down the lane to the 13th century church of St Clement. It is currently closed, of course, which is frustrating as it has the most complete set of medieval wall paintings in Berkshire. 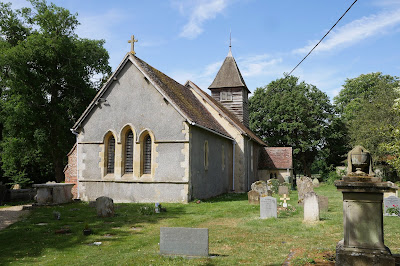 We cross two fields to reach a concrete road which leads to a farm shop. It is amazingly busy and clearly doing great business. We then walk along a track and emerge into a large field which we cross, then through a bit of woodland to an even larger field. 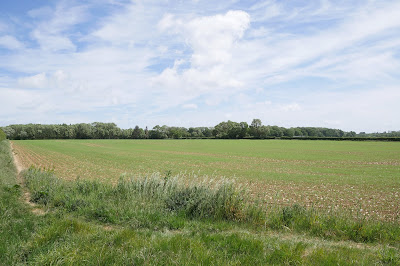 We continue along field-edge paths towards Yattendon, crossing another large field on a nicely marked path. 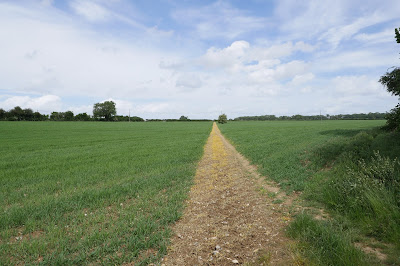 We have been through Yattendon many times on the way to our dentist in Pangbourne, but it was good to walk through it and see things more clearly. This is the Pump House (now a bus shelter) which was the work of the great Victorian architect, Alfred Waterhouse. Waterhouse bought the manor house in Yattendon and lived there as a country squire. Waterhouse's long list of buildings include Manchester City Hall, the Prudential building in Holborn and Reading Town council chamber and offices. 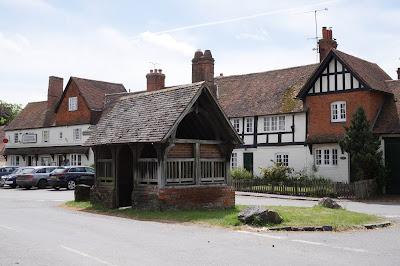 Nearby is the church of St Peter and St Paul which dates from about 1450. Waterhouse did some internal and external work on the church, including adding the porch. 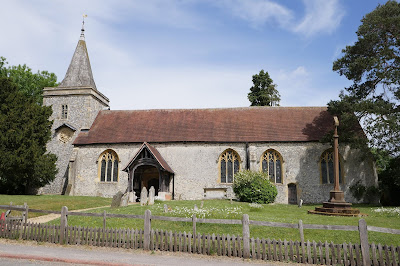 We followed a path to the left of the church and emerged into woodland. This soon gave way to a series of massive fields where we walked along the field edge: I have never seen fields so large as on this walk.

After the final field we followed a track into Ashampstead which became Church Lane and led us back to the crossroads.


New flowers of the day 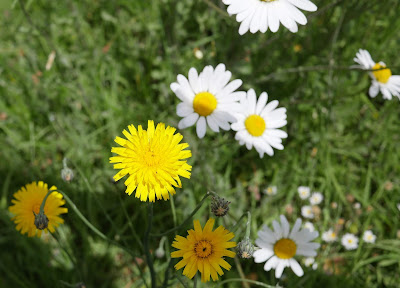 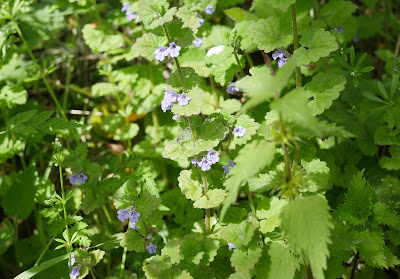 The Slender Speedwell was harder to identify, but when I looked in my Collins Flower book and read that it was found in churchyards I felt more confident, as that was where we saw it.

I was left with the strong sense of a very well managed farming operation on a grand scale. The price of this was all to obvious: we saw a grand total of two butterflies during the walk and there was a noticeable lack of wild flowers in the hedgerows, which were anyway few in number because of the massive fields. There was just one set-aside in the corner of a field, but this had few flowers and was isolated from everything around it. There were various notices on display about facilitating wildlife, but little evidence of anything much being done to make it a reality.