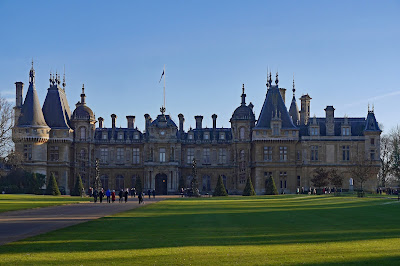 Waddesdon is one of those places we had long intended to visit and we were stimulated into making a trip there by a piece in House and Garden describing a new house built in the park, Flint House. We were lucky to find Waddesdon open at this time of year and this turned out to be because there is a big tradition of celebrating Christmas.

Waddesdon Manor dates mostly from 1877-1883 and was built for Baron Ferdinand de Rothschild in the style of a French chateau. The architect was Hippolyte Destailleur who had worked on the restoration of real French chateaux, and so knew what he was doing. It was bequeathed to the National Trust in 1957, but at some point the Trust leased it back to the Rothschild Foundation.

A shuttle bus service takes people from the massive car park, but we set out on foot towards the Manor, and having found the location of Flint House on the Waddesdon website, knew we had to turn off to the left after a short way. This gave us a nice initial view of Waddesdon. 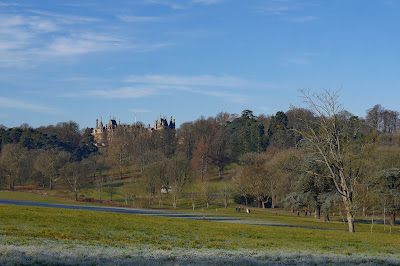 We followed a tarmac track and soon admired this beautiful stand of trees. 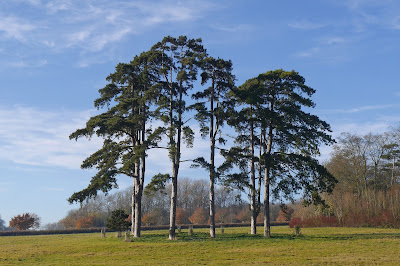 We passed Windmill Hill, the headquarters of the Rothschild Foundation (Stephen Marshall Architects, 2010) ... 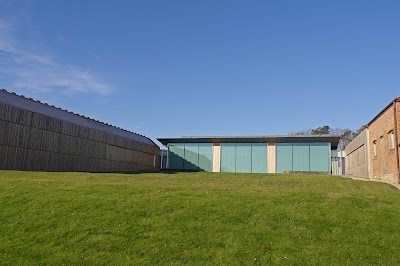 ... and headed downhill to find the splendid Flint House sitting in the centre of a wide valley. It was commissioned by Jacob de Rothschild from Charlotte Skene Catling in 2015. The house is clad in knapped flints set in black mortar which gradually give way to smooth grey squares towards the top. A small annex sits facing the main house out of shot to the left. 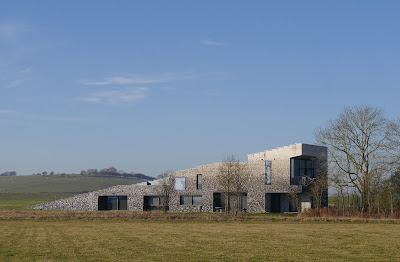 We headed back uphill past Windmill Hill, admiring the hyper-realistic horse and cart statue on the ridge, to re-trace our steps to the main path to the Manor. 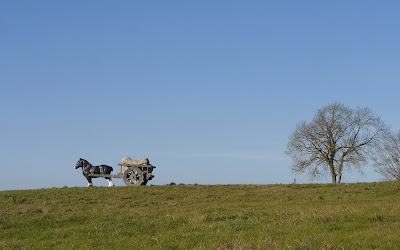 We passed a nice grove of trees. 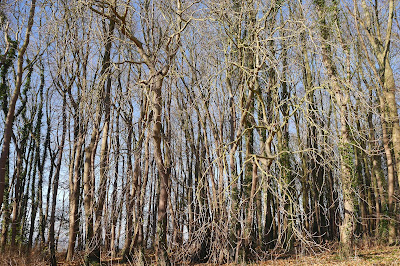 On regaining the main path we headed uphill to pass the Garden facade. This faces south and looked lovely in the early afternoon sunshine. The ground floor is obscured by the slope, but actually this was a great benefit as it was anyway blocked by a whole series of wooden huts used for the Christmas Fair. 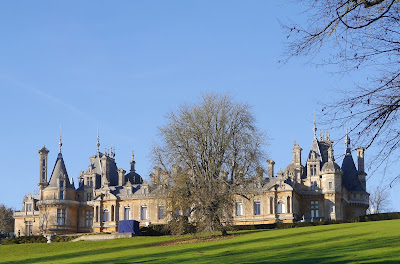 Heading round the right side of the Manor to the Entrance Front (which of course faces north, and which explains why the picture at the head of this post is so dark), we found this entertaining installation, one of a pair. These  sculptures in the form of giant candlesticks are called Lafite and are the work of Portugese sculptor Joana Vasconcelos. Closer inspection reveals that they are made from 1000 magnums of Château Lafite Rothschild (Château Lafite was bought by Baron James de R in 1868.) The inspiration for the work was apparently Marcel Duchamp's bottle holders of 1914. 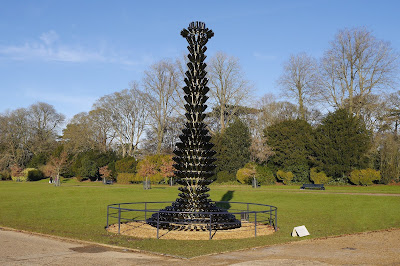 Elsewhere in the grounds was a light installation, Field of Light, by Bruce Monro, which consists of 9,000 glass spheres which light up as darkness falls. It sounds lovely and we regretted not being able to stay until dusk. 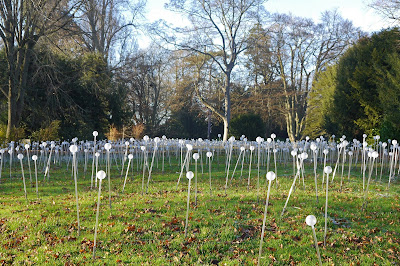 Round the corner was the cast iron Aviary of 1889. It put me in mind of Otto Wagner's art nouveau pavilions in Vienna. 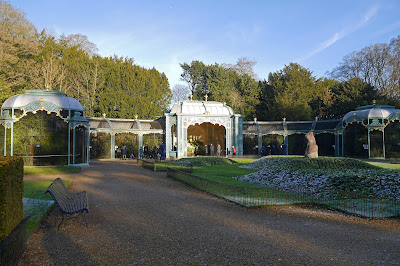 We did also make a brief visit inside the Manor. Unfortunately, as we saw it, the interior had been subjected to a Christmas makeover, with seemingly every room containing a monster, fully decorated Christmas tree. It was cluttered, crowded and basically horrific. Of course, everybody else had presumably come to see just this and seemed well pleased.

Finally, we walked back to the car park. On leaving the grounds and heading through the village I spotted these almshouses. 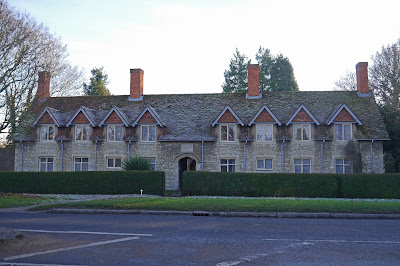 They were originally built in 1642 by Arthur Goodwin but were renovated in 1892 by, guess who? Yes, Baron Ferdinand de Rothschild. Modernisation was financed in 1972 by Mrs James A de R.

Conditions: quite cold, but clear and sunny.

Distance: we walked about six miles all told.

Rating: four and half stars. A great day out.