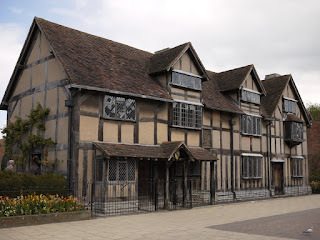 My birthday. This walk around Stratford, courtesy of the Stratford upon Avon website, was the culmination of an excellent day out which had already included a trip to the wonderful Stratford Butterfly Farm and lunch at the fantastic Bernadettes restaurant.

The walk begins at the statue of the Jester at the top of Henley Street. You walk down the street and soon come to William Shakespeare's birthplace. The part on the left was the family home, while the part on the right was his father John's workshop and shop (he made and sold gloves).

At the bottom of Henley St you turn right into High St, with the handsome half-timbered Marlowe's restaurant building down on the left. Opposite, on the right, is the ornately carved Harvard House dating from 1596. It was the birthplace of John Harvard who founded the university of the same name. 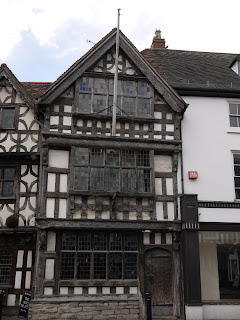 Diagonally opposite is the magnificent Victorian gothic Old Bank, with a wonderful terracotta frieze of scenes from Shakespeare and a byzantine-style mosaic of the great man over the door. 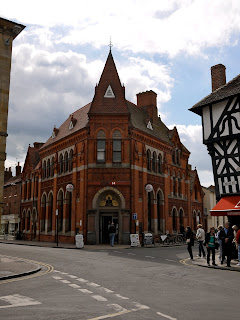 You carry on down Chapel St past another fine half-timbered building - the Shakespeare Hotel. 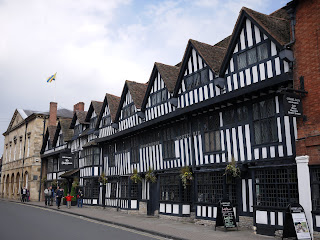 Then you come to Nash's House (home of Thomas Nash, who married Shakespeare's granddaughter), with the site of New Place, the house where Shakespeare died, next to it.

On the opposite corner is the Guild Chapel. It dates from the 13th century and was build by the fraternity or Guild of the Holy Cross. There was also a hospital for poor priests. The nave and tower were added in the 15th century. Inside there are the remains of frescoes and fine (modern) stained glass depicting famous citizens of the town. 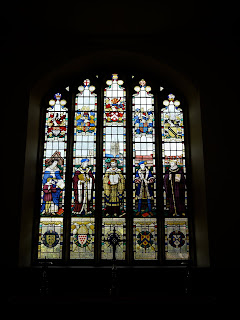 Continuing along Church St, the left-hand side has the former Guildhall, King Edward VI Grammar School and almshouses (of 1427) erected by the Guild. The Guild was a powerful force in the town, but was suppressed along with the monasteries in the Reformation and its property given to the town council. 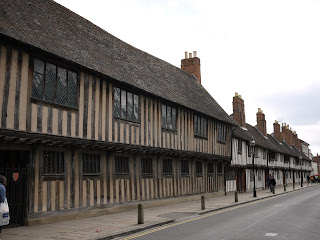 At the end of Church St you turn left into the Georgian New Town, with this lovely group of presumably Victorian houses on the left hand corner. 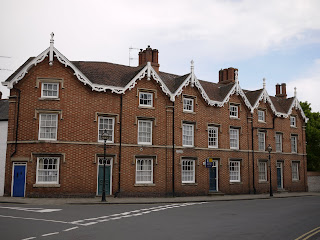 At the end you reach Holy Trinity church, which contains Shakespeare's tomb. The building itself was begin in 1230 and extended at the end of the 13th century. The crossing, under the tower, is the oldest part of the building and beyond it the "weeping" chancel can be seen. 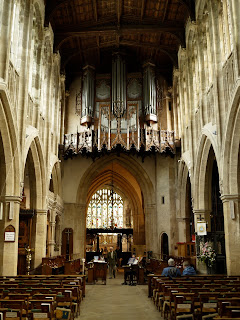 It is described as weeping because it is at a slight angle to the line of the nave. It dates from a further rebuilding in the late 15th century.

You now follow the line of the river to pass the Royal Shakespeare Theatre. An artistic power house, but architecturally very dull.

After a glance at the one-time canal basin (Stratford was an inland port) and the bridge over the Avon, you head up Bridge St into Wood St and into the Rother Market to admire the elaborate Victorian clock tower. 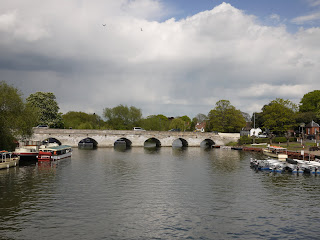 From here it is a few steps back to the Jester.