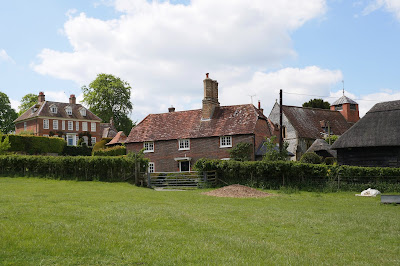 This walk starts at the Crown and Garter pub in Inkpen. You cross the road and walk through the edges of Inkpen Common, then across a field to follow a path by Manor Farm. This brings you to Upper Green, one of the several hamlets that make up the village

The church of St Michael is of 13th century origin (the doorway), but what you see now is almost entirely from the 1890s. Outside is this rather lovely plough, a tribute to those who have worked the land in the village. 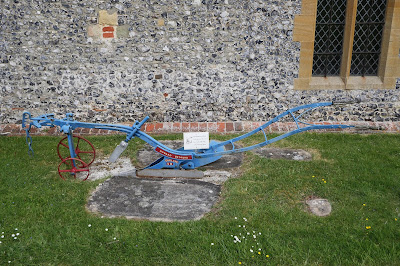 After a short section of road, we entered a large field and see the route that would take us up to Inkpen Hill. 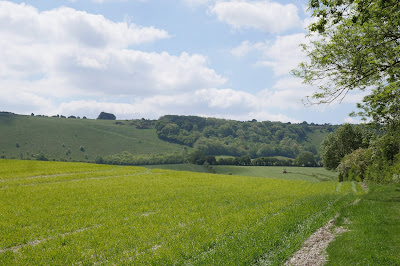 We climbed through woodland and looked back at one of the characteristic large fields, wondering about the  copse right in the middle. 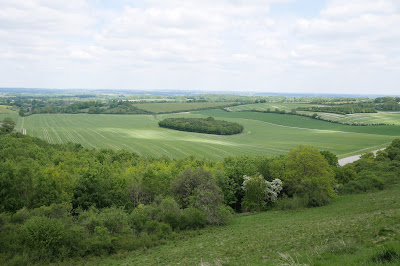 As we approached, we had spotted a large number of hang gliders in the air and as we got near the top of the hill, things got exciting as a hang glider which hadn't gained much height came hurtling towards us. We wondered if some the of the pilots were beginners. 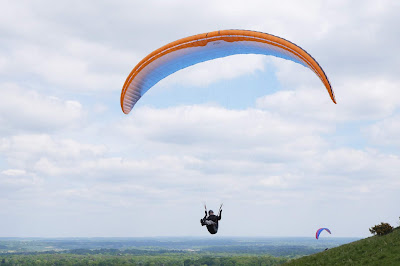 We reached the main pathway which links the various hills and turned eastwards towards Combe Gibbet, along a section of the Test Way which we had walked along in our recent walk from Buttermere. This time we went a bit further, right up to the famous Gibbet (you can read about it here.) 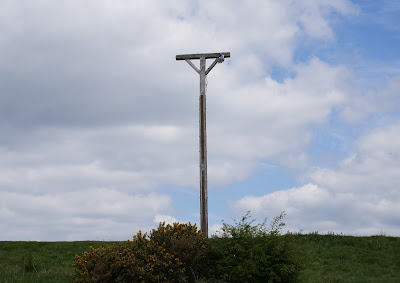 There were an astonishing number of vehicles parked along here, presumably to do with the hang gliding. Many (perhaps with more expert pilots) could be seen high above and behind us.

We crossed the road and joined the Wayfarers' Walk, something I did in its entirety some years ago. This took us past Walbury Hill, an Iron Age hill fort which has the distinction of being the highest point in Berkshire at 296m (974 feet). This was the view to the south of Walbury Hill. 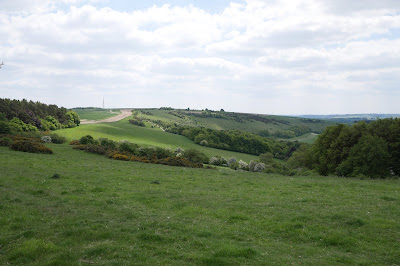 Now we turned northwards and looking at Walbury Hill on the left, it was possible to see much more clearly the earthworks which you would expect in a hill fort. 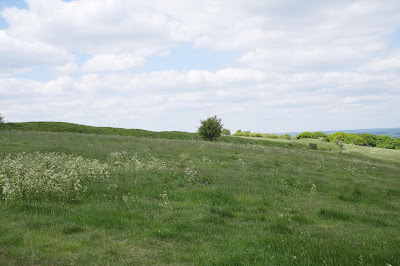 We descended towards another of the hamlets, West Woodhay (I am told you pronounce it "Woody") and I was delighted to spot my first Small Copper butterfly of the year.

We crossed the road and walked along the edge of a large field - which like the earlier one also had a substantial copse in the middle. There must be a story here! We also had the pleasure of hearing our first Cuckoo of the year. 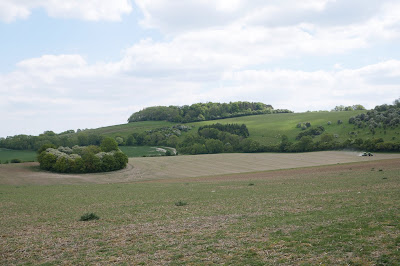 Reaching the road, we skirted West Woodhay house behind its walls and outbuildings and took a track to the left which brought us back to the pub from where we started.

From:  Pub walks in Berkshire & Oxfordshire.