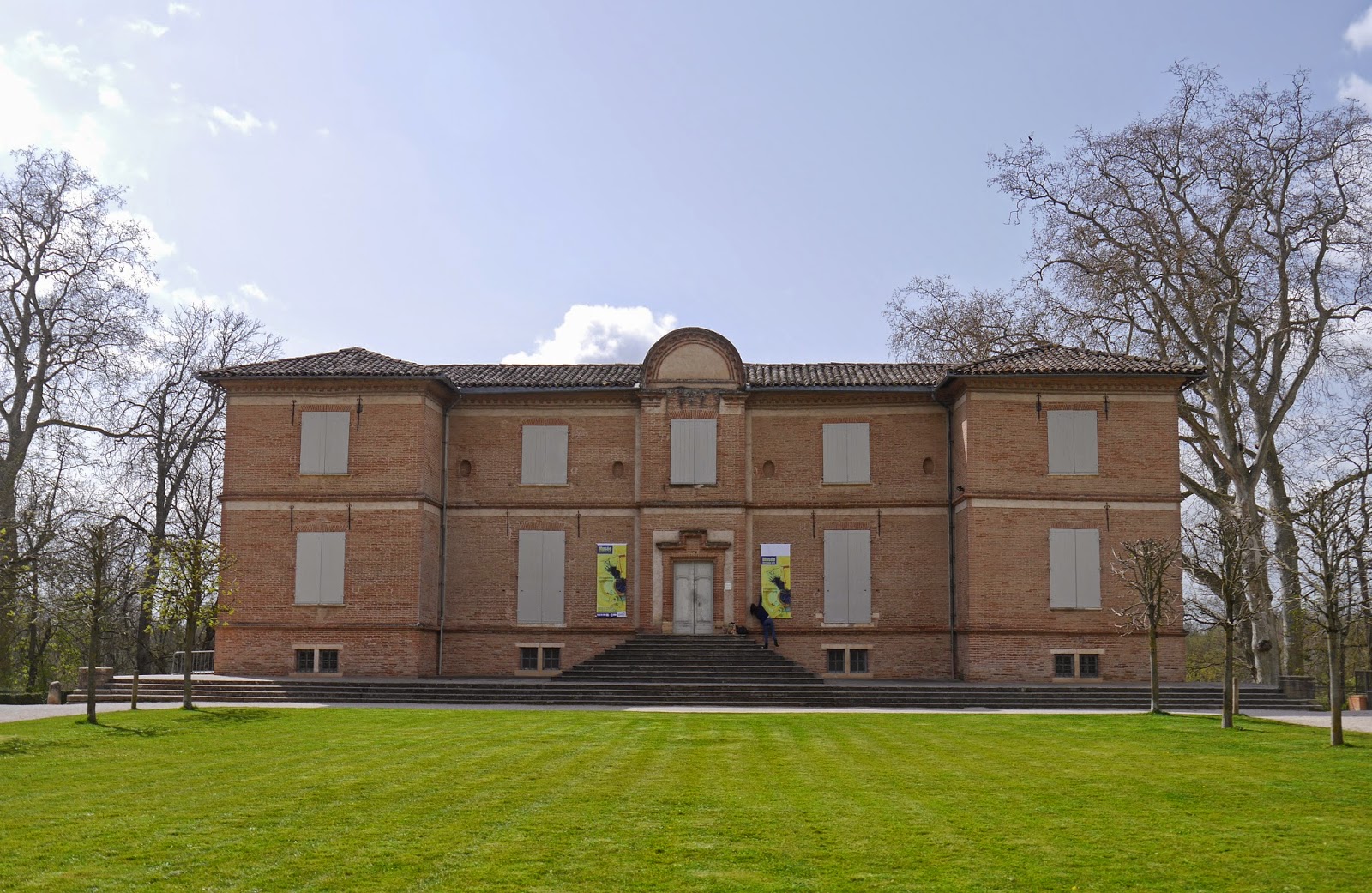 We have just arrived in Gaillac to visit our friends Dave and Chris and off we go on a short tour of the town. We start at the Parc de Foucard, where the 16th century chateau now houses the Musée des Beaux Arts.

At the rear there is a formal garden with this beautiful pavilion in one corner. It was intending for pursuits such as reading, symbolised by the sculptures on the roof. 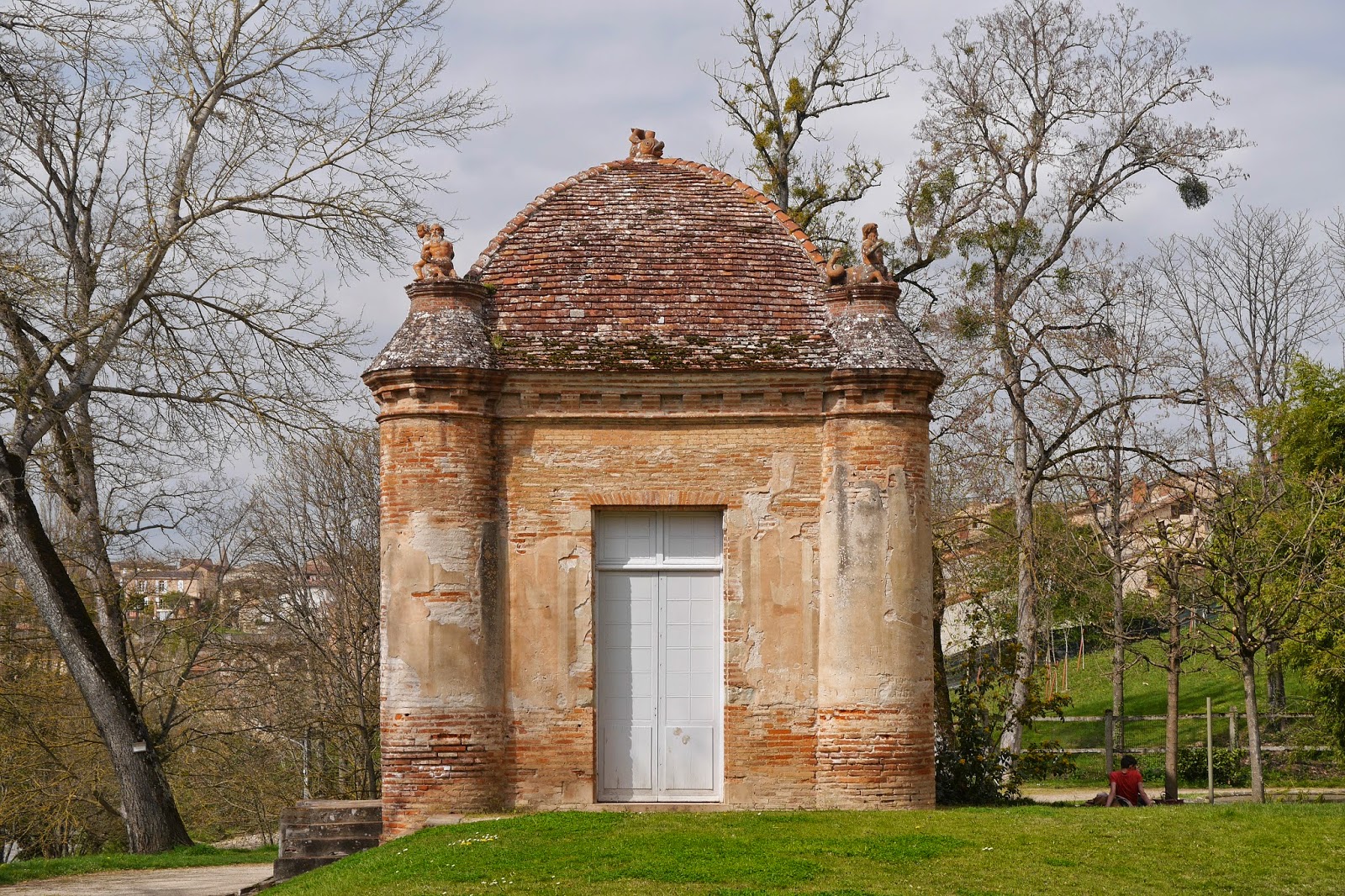 From here we walk close to the river Tarn towards the remains of the old town walls and the former Abbey of St Michel. It dates from the 10th century, but was rebuilt in 1271 and again between 1572 and 1620 after being damaged in the wars if religion. 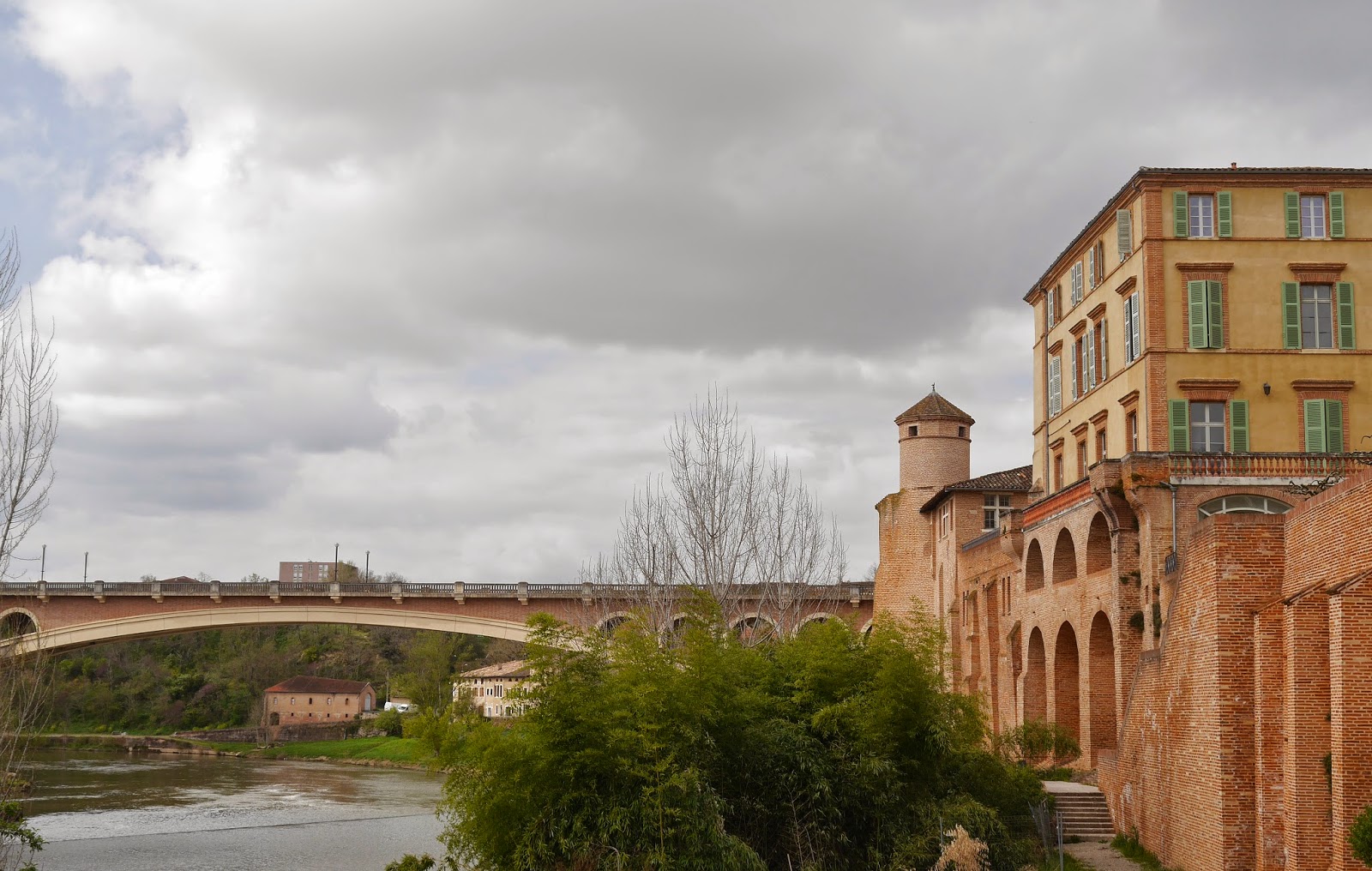 We then turned away from the river to pass by the east end of the abbey church and round to the wine tasting centre where we bought some Gaillac wine called Astrolabe. Extensive tasting later confirmed that it was excellent. 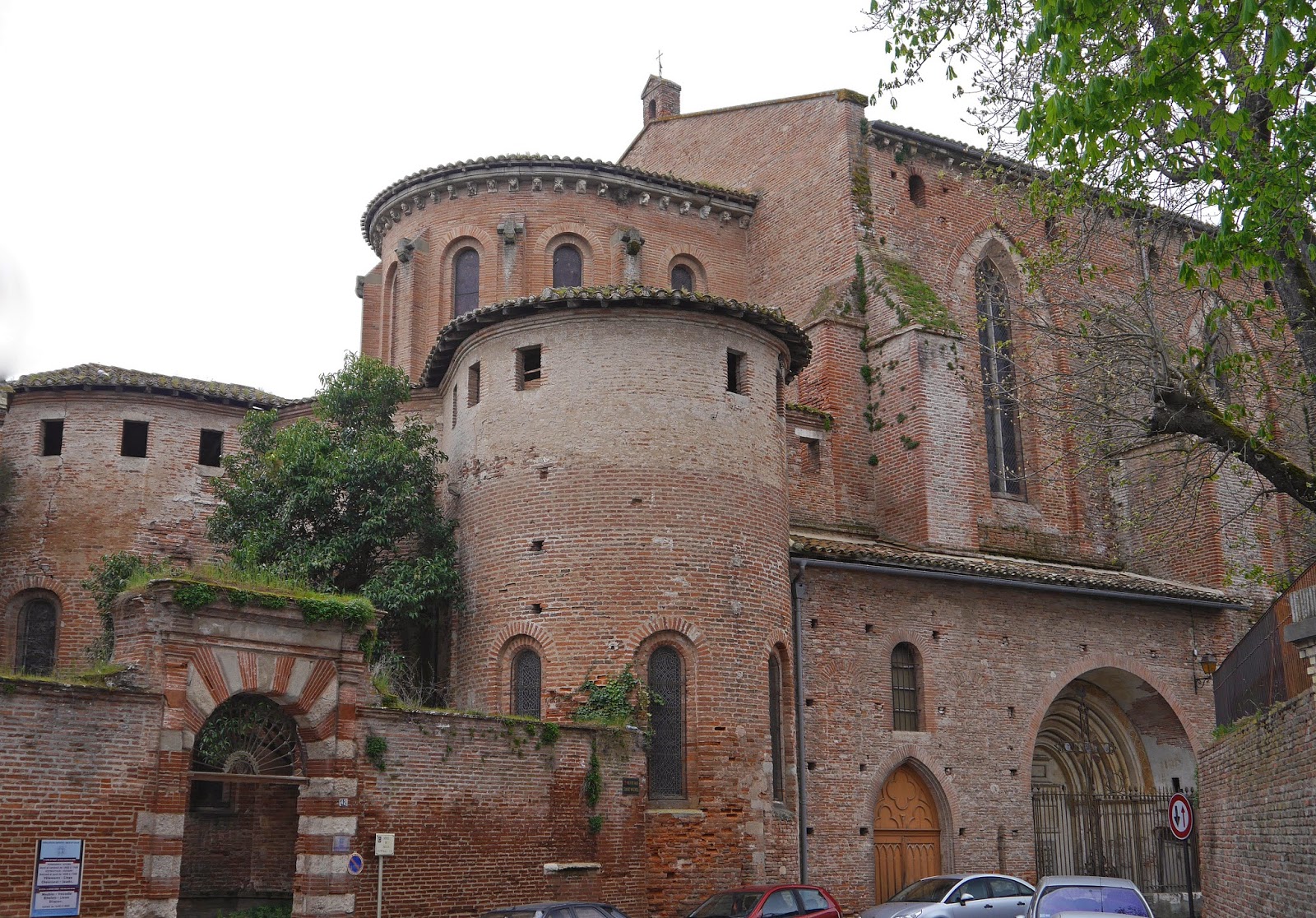 From here we went to the arcaded Place du Griffoul and enjoyed the brick and timber houses and the renaissance-style covered market. 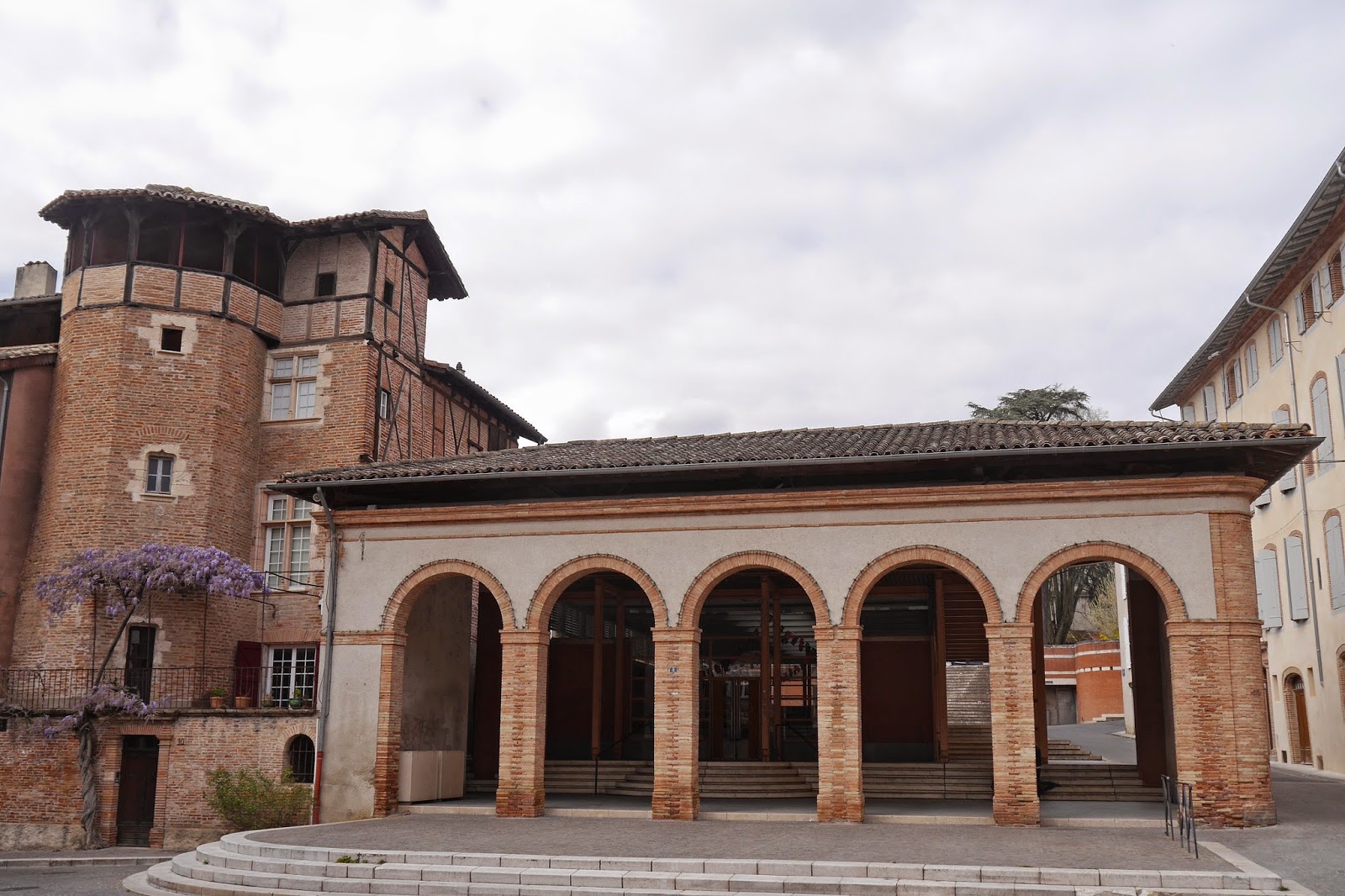 Just behind the Place lies the wonderful Hôtel de Pierre de Brens: the town house of the Pierre de Brens family from the 13th to the 16th century. It is a substantial brick-built windows with mullioned windows, projecting towers and brick corbels. 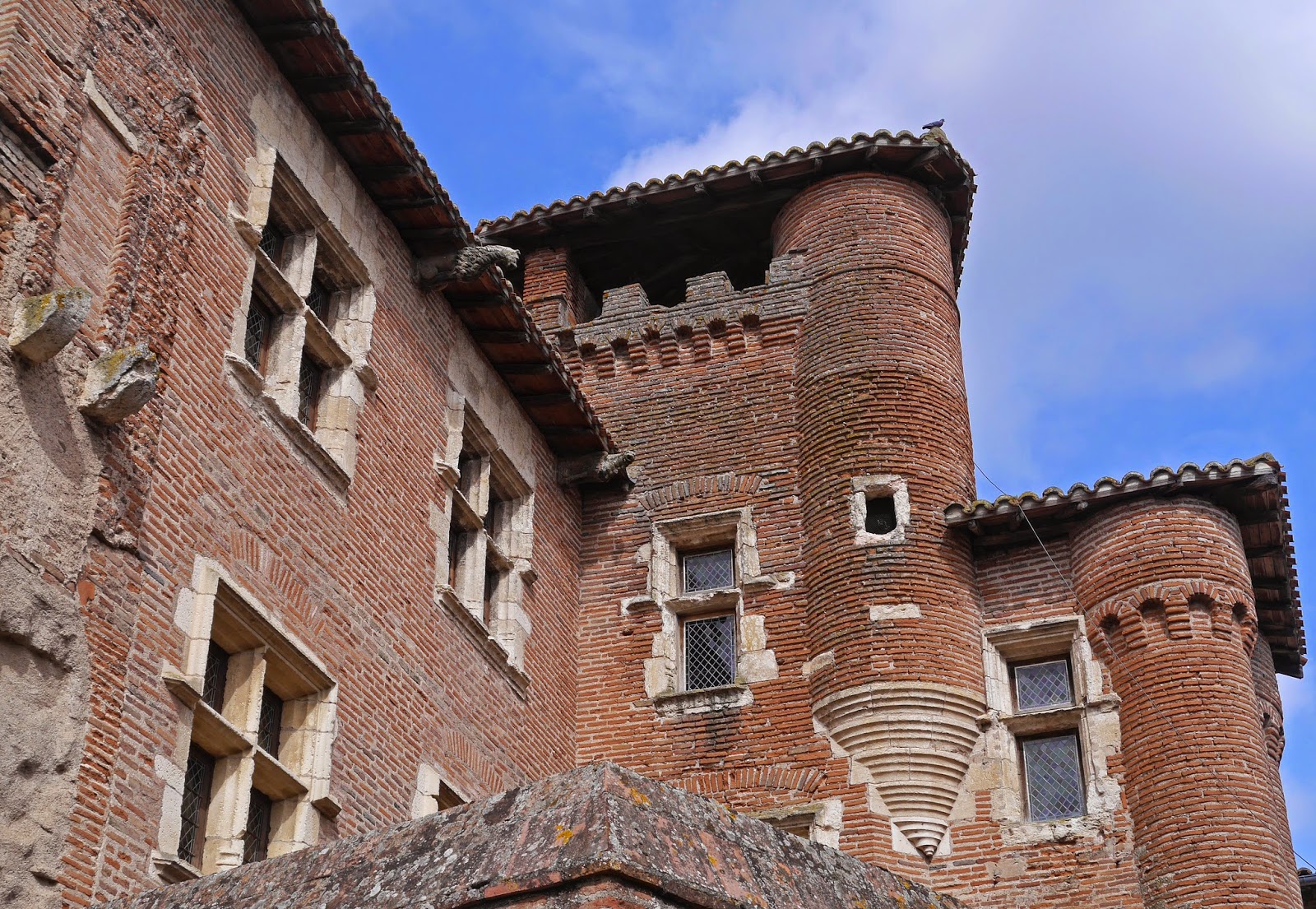 A few steps further and you are in the large Place de la Libération, a large, recently refurbished space, which turned out to have an excellent patisserie which I could not resist trying (a religieuse, in case you are wondering). This square leads in turn to the Place d'Hautpoul, dominated by the neo-classical Hôtel de Ville. 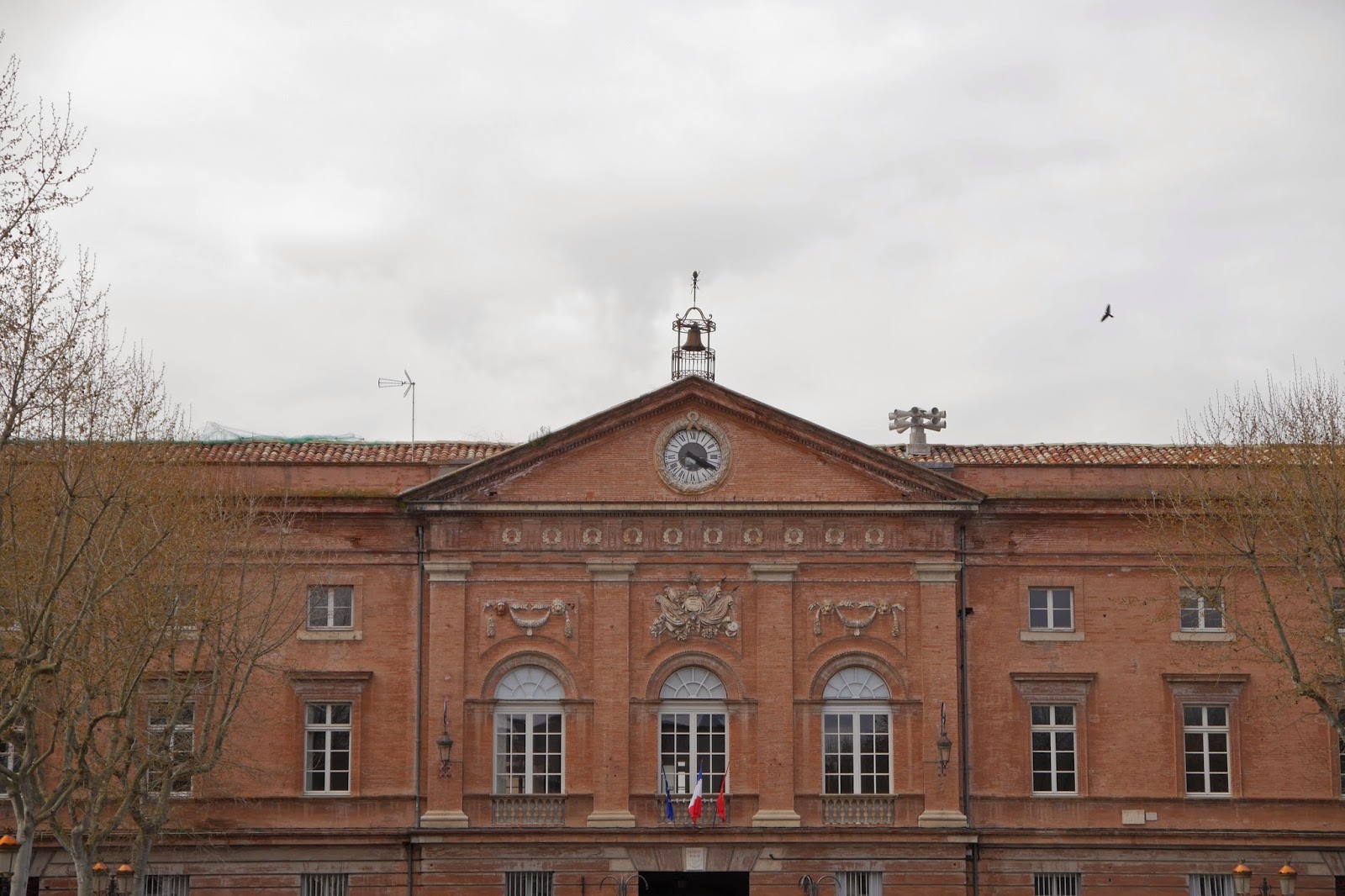 We headed back through the La Portanelle quarter, where we were very struck by this row of recently renovated houses. 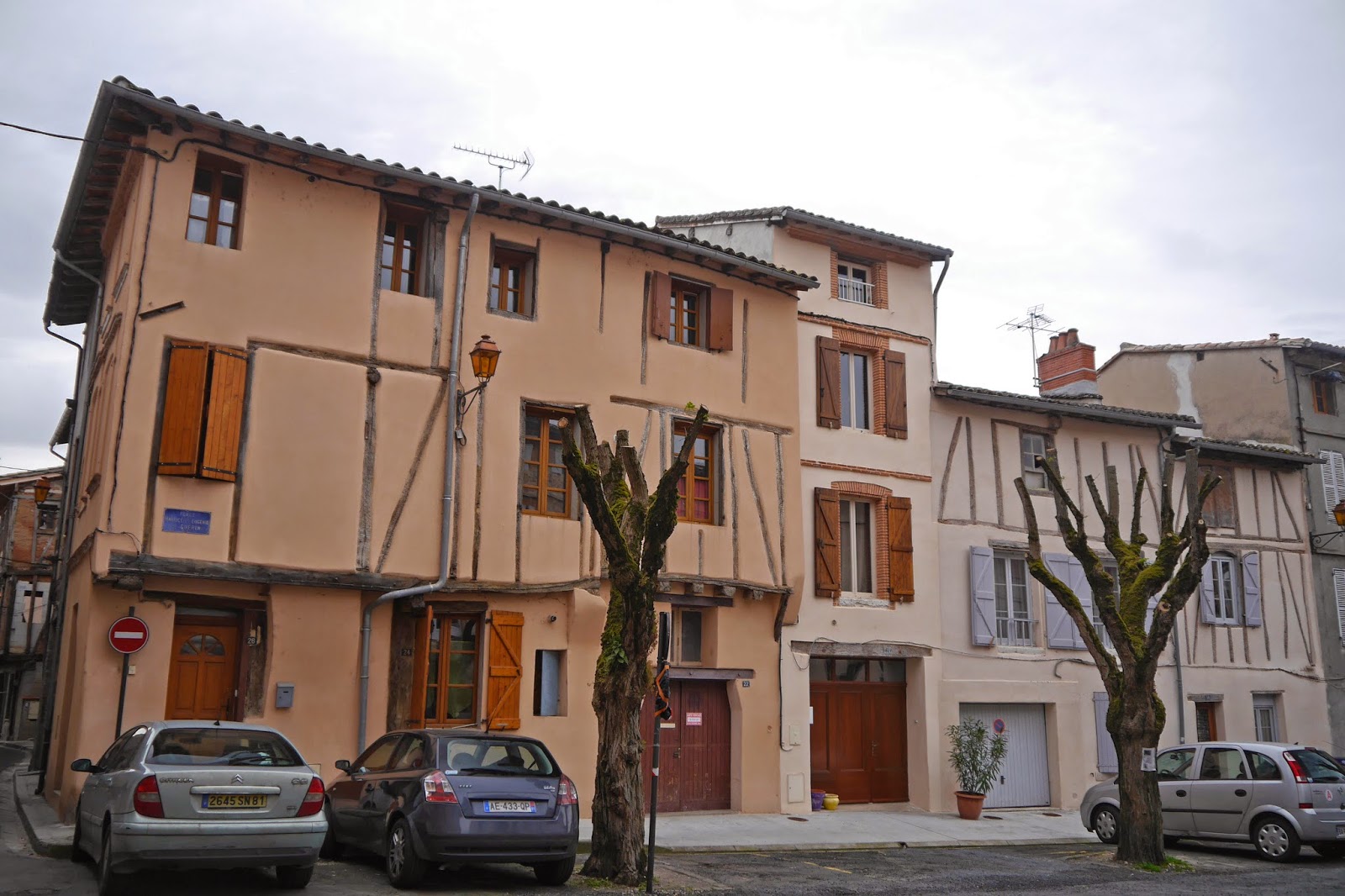 And by these nearby with the first floor jettied out into the street. 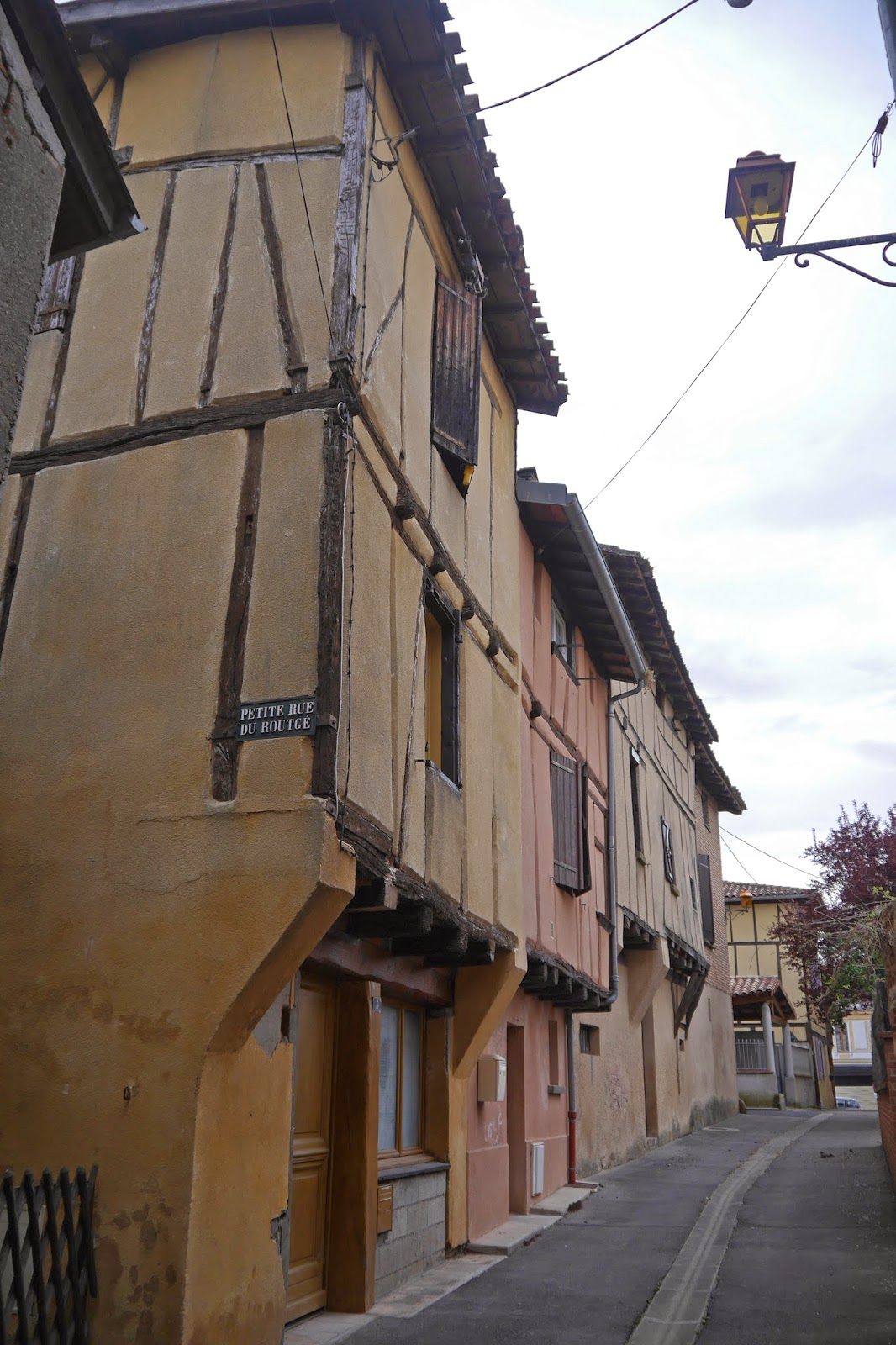 Rating: four stars. A charming quiet town, off the beaten track. As restoration continues it will surely  become ever more attractive. 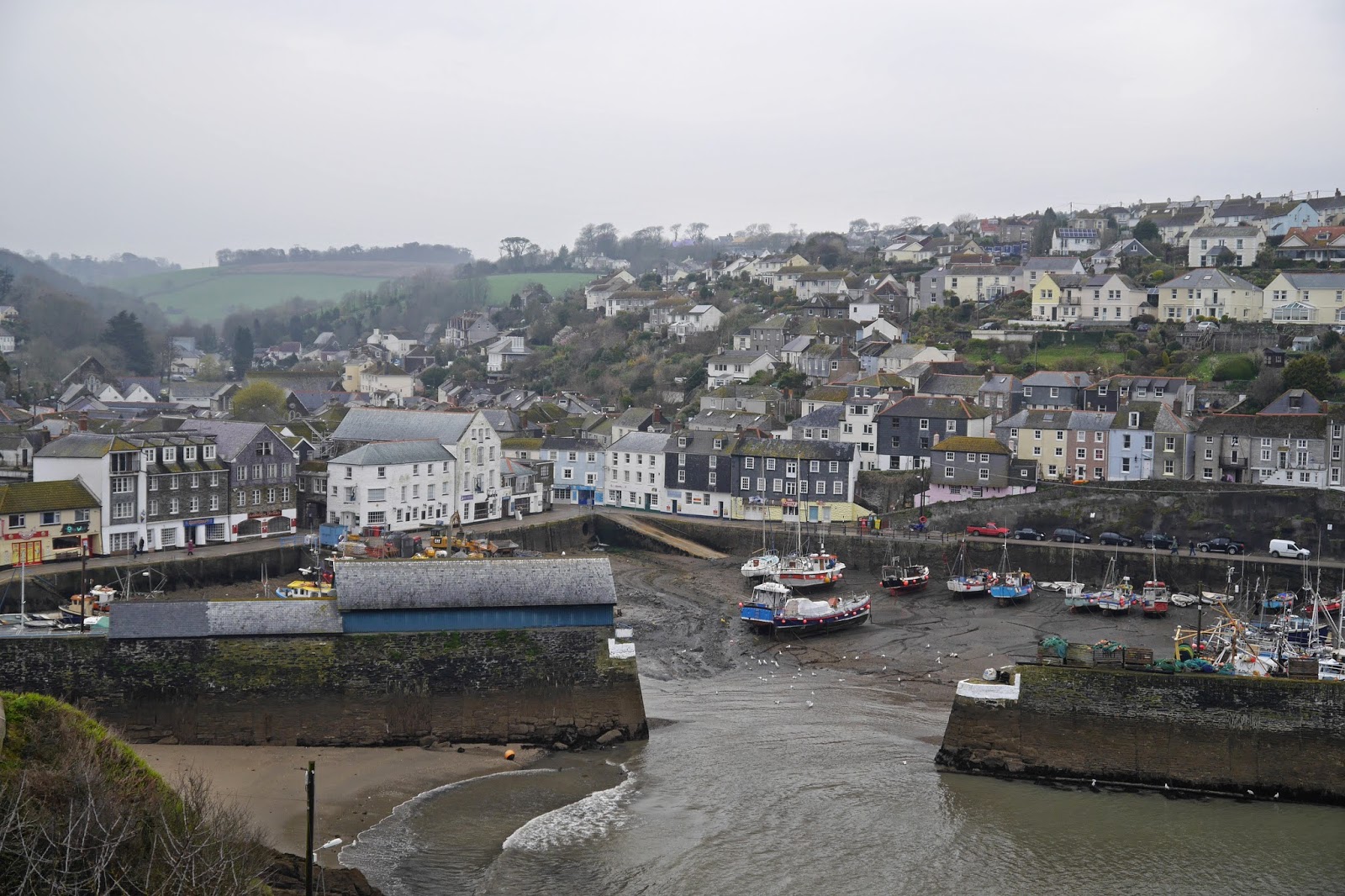 We are just doing a short stretch today as we have to be heading home. It will make the next key point, Portloe, easier to get to next time. We leave Mevagissey by, inevitably, climbing up from the harbour. The tide is out, but the inner harbour and the village are still picturesque.

The lighthouse on the outer harbour is especially lovely in the hazy morning. The tip of Black Head is visible in the background. 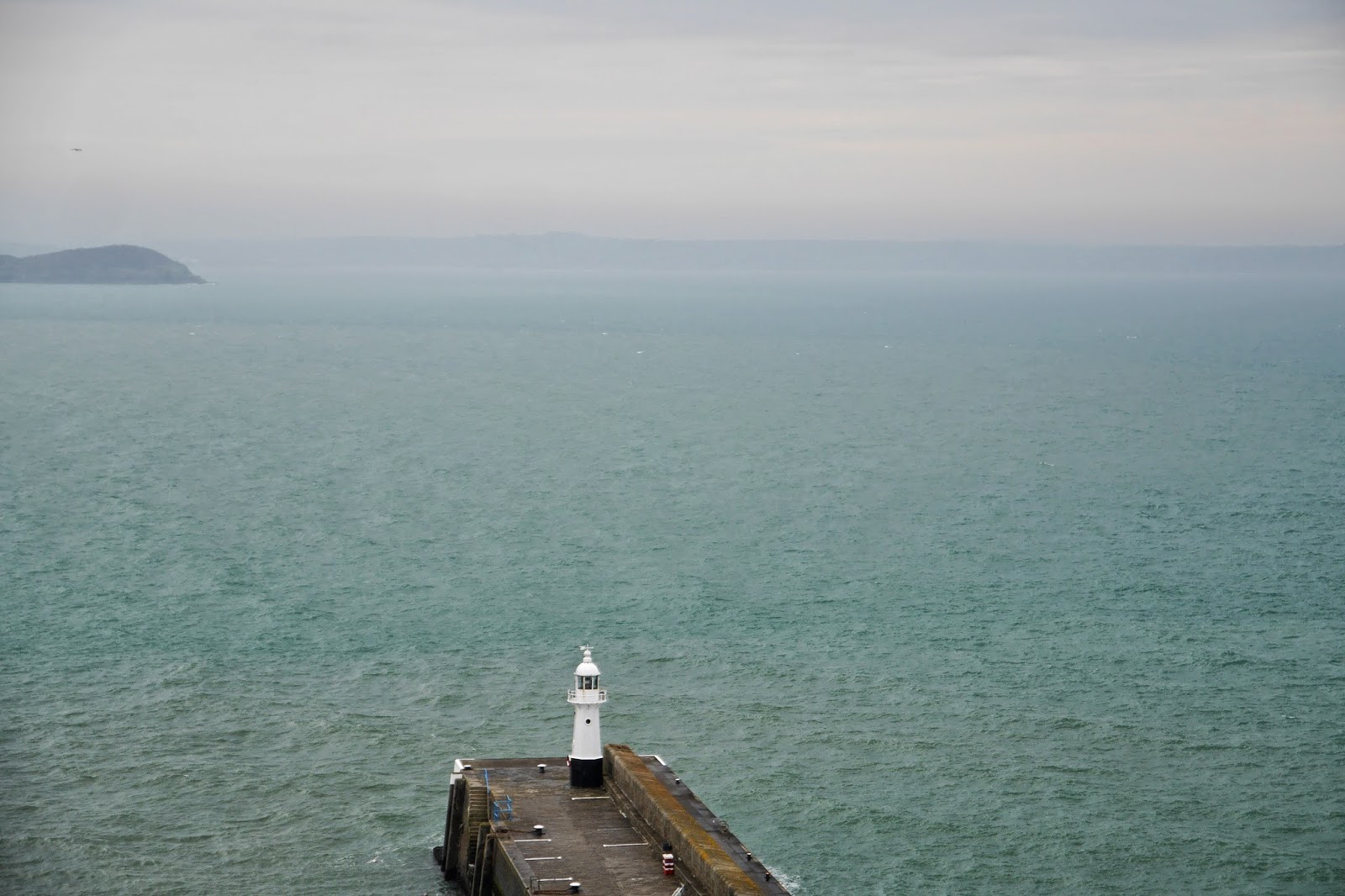 We follow the road round to Portmellon, with its shallow sandy beach and walk along a private road towards Chapel Point. 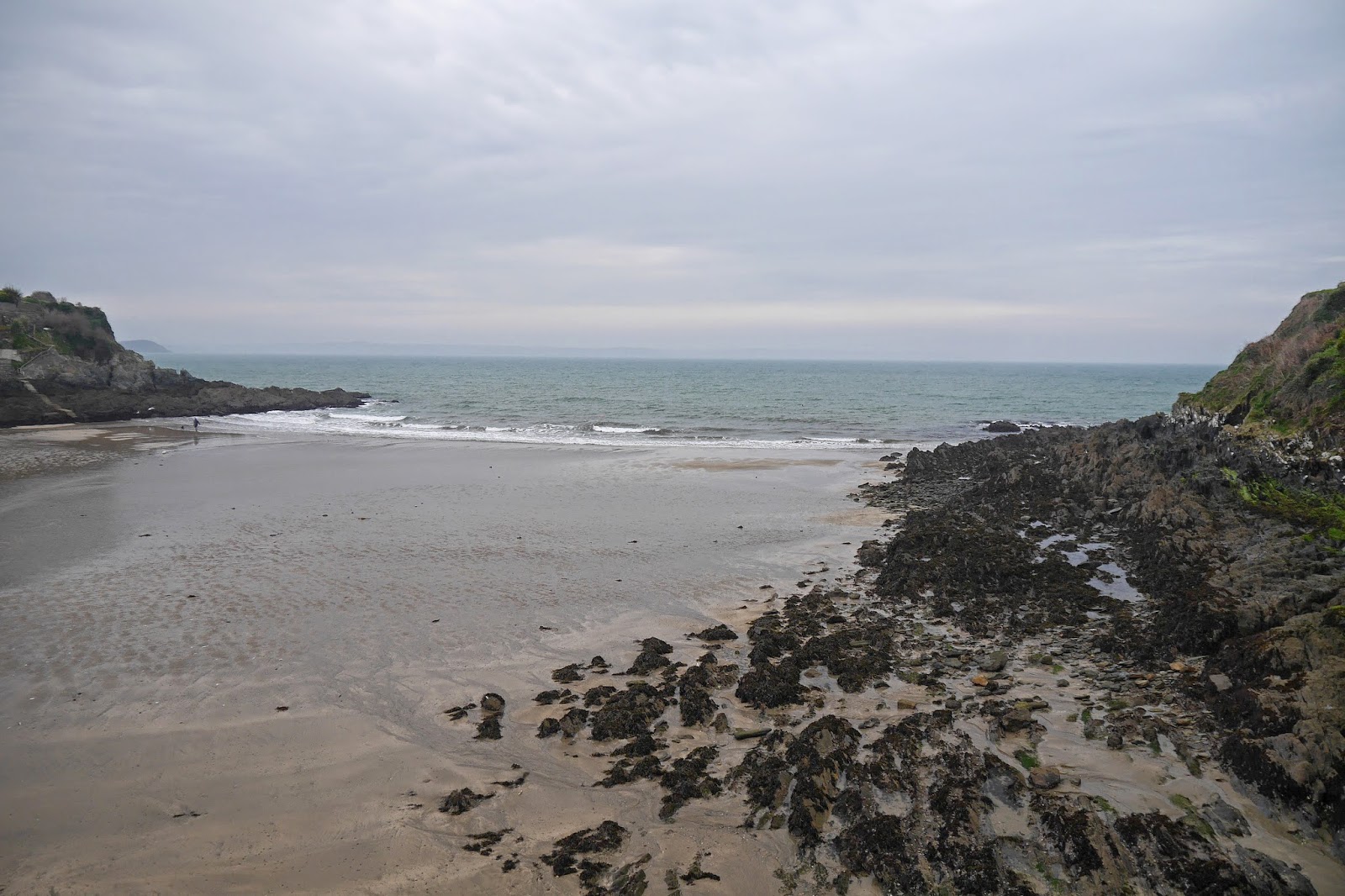 The coast path leaves the roads and descends to the the cliff edge and then across a grassy area towards Chapel Point. This picturesque group of houses look like they were built for a monastery or artists commune. Pevsner says that they were built by J A Campbell between 1934 and 1939. I have also discovered that the architect's own house is a listed building. 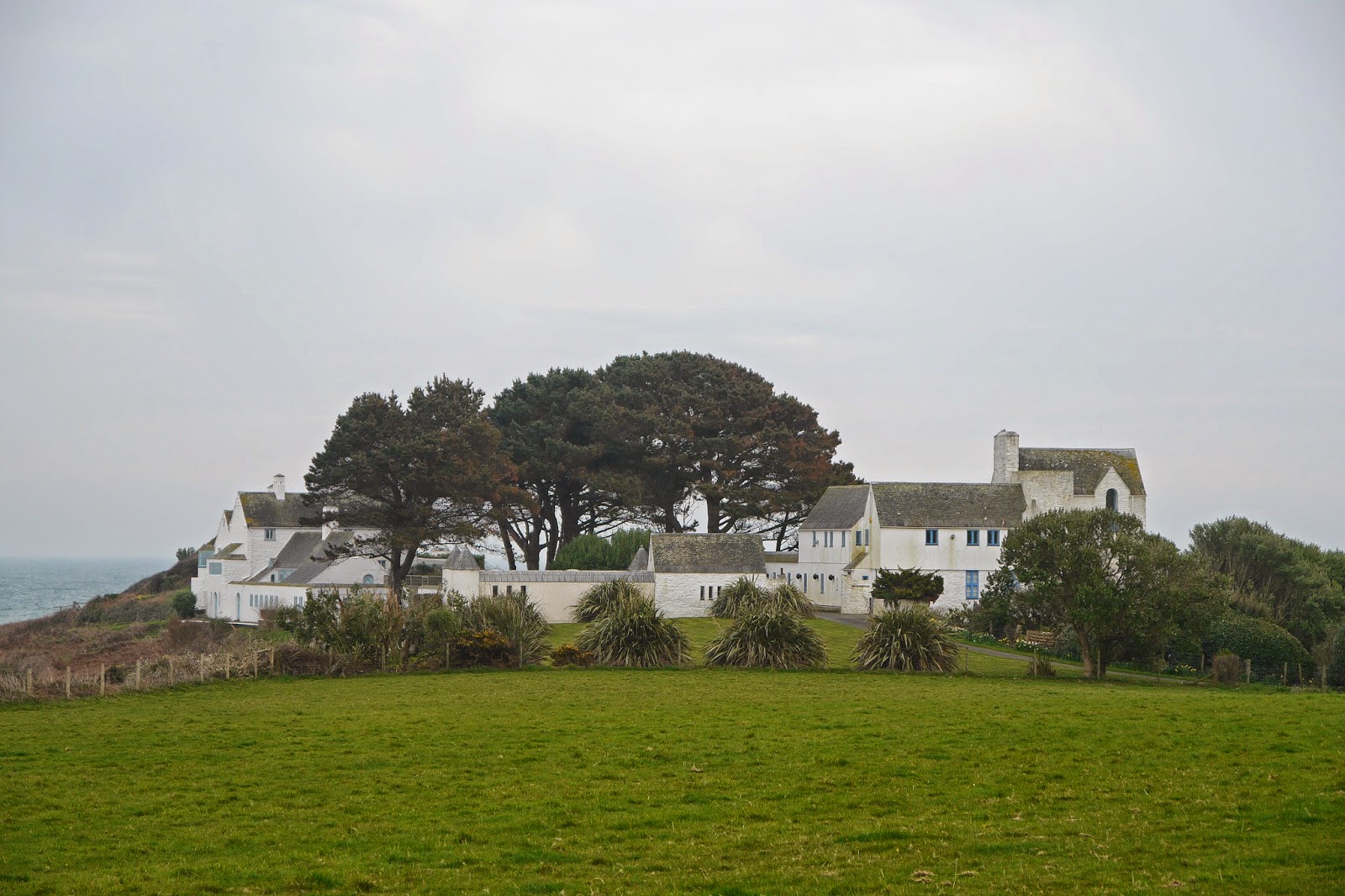 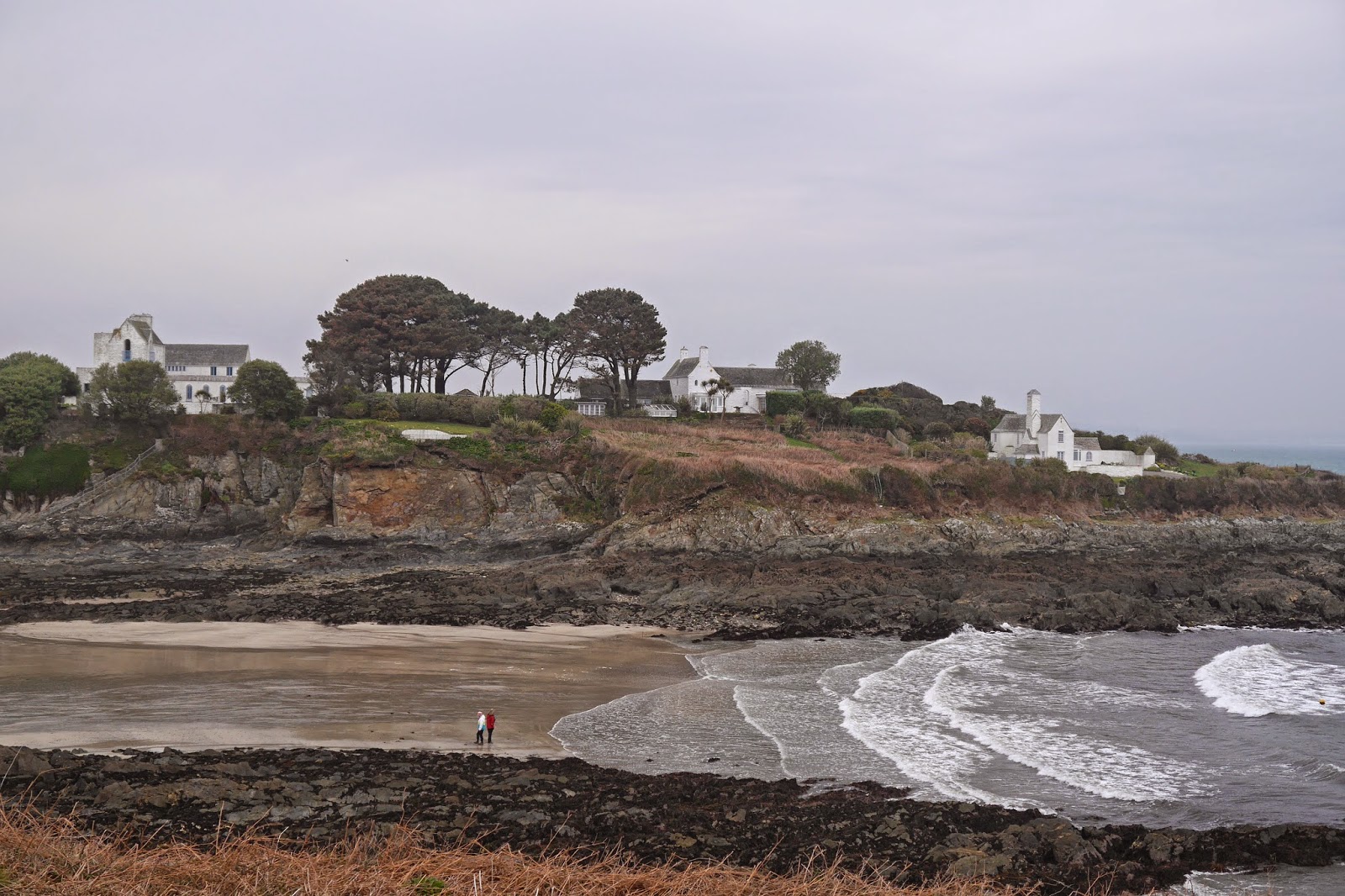 Now, after a bit a climb, it was along the cliff tops towards Gorran Haven. 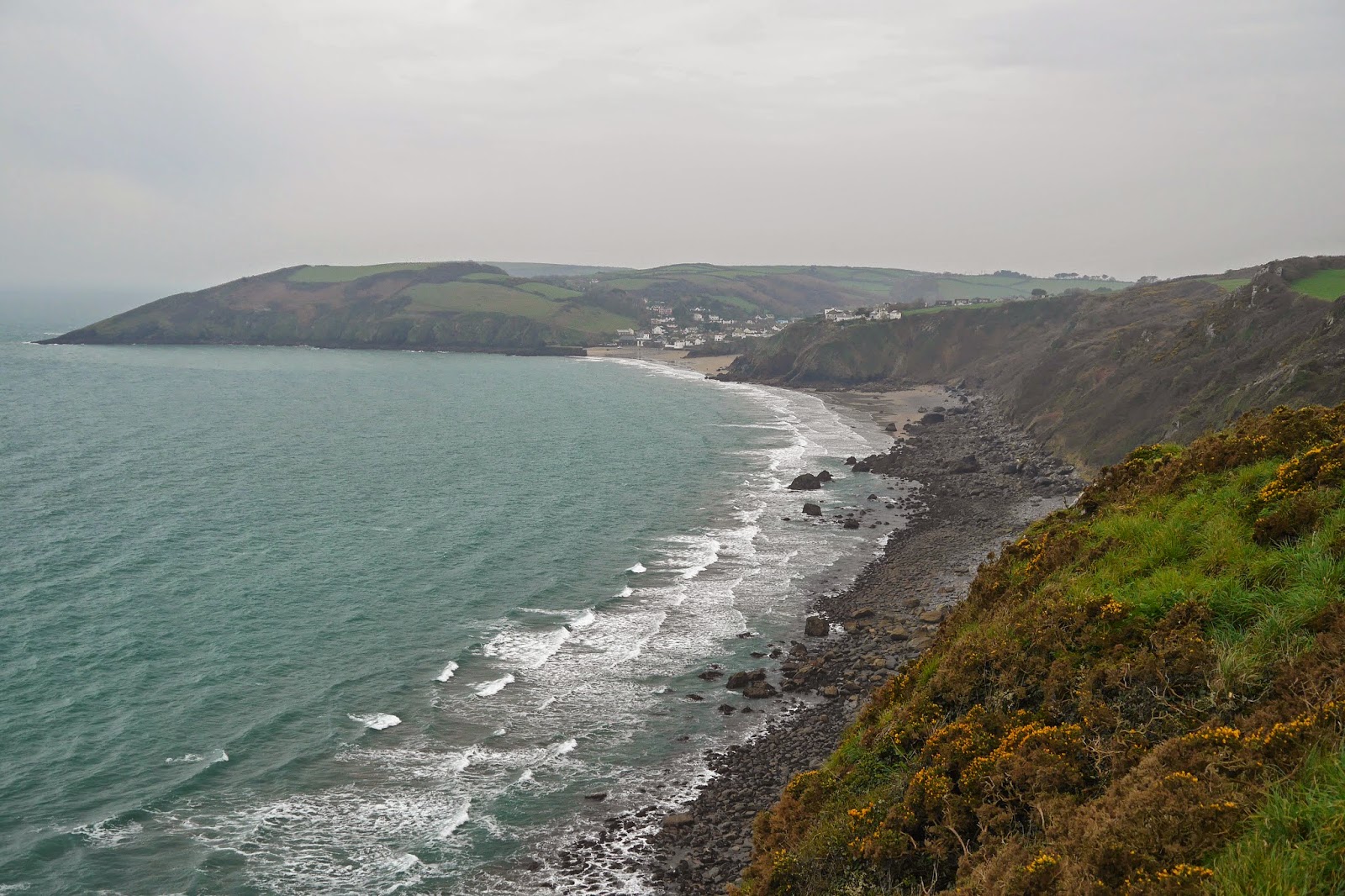 We reached the village and descended the narrow street to pass the picturesque St Just's church. Inside it consists only of a short nave with a ship's keel roof. Pevsner says it was largely rebuilt in 1885. 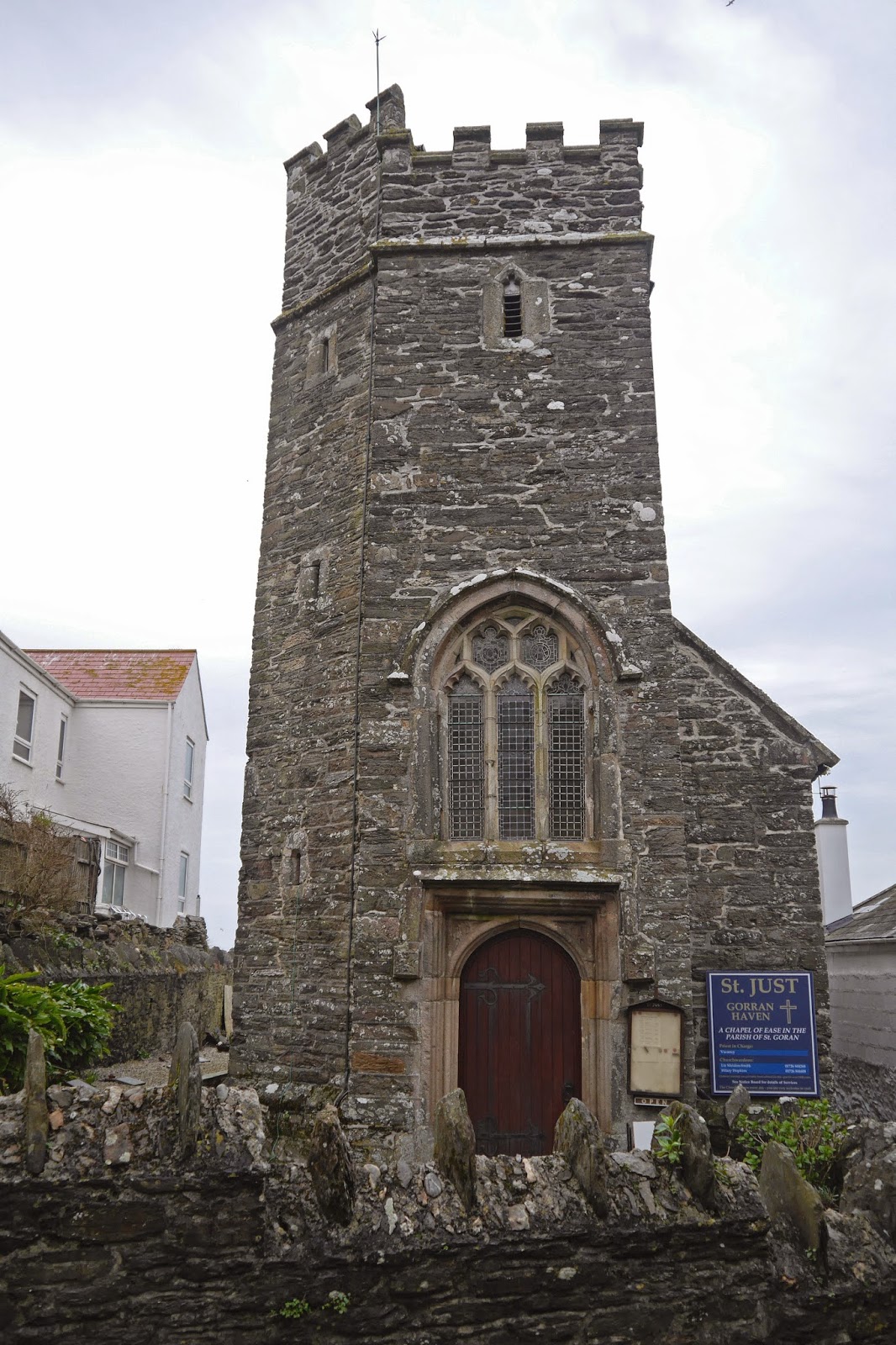 At the bottom you come to the lovely sandy beach with a breakwater to the right. 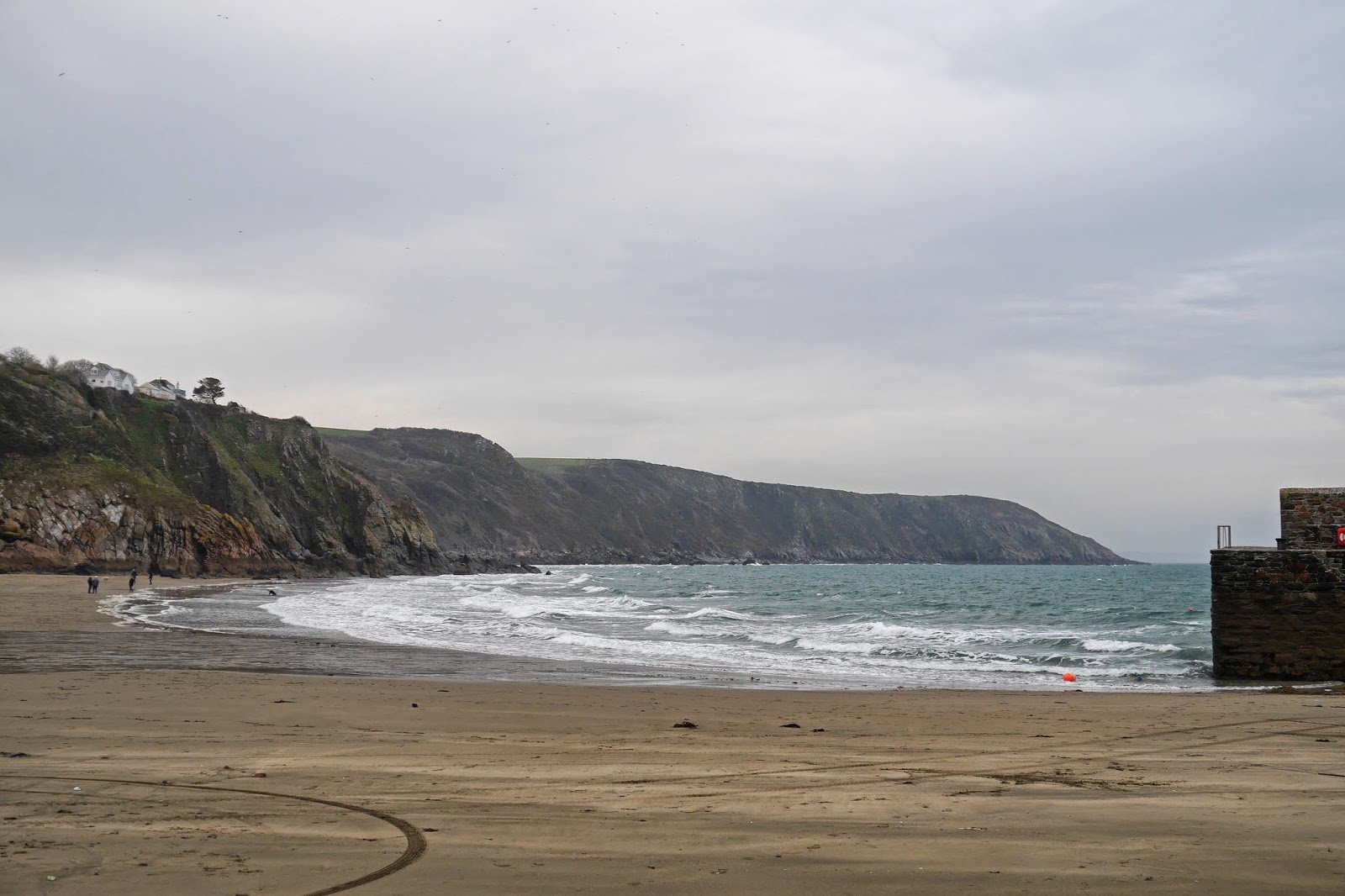 That's it for this trip. I pondered when we started out from Polperro on Wednesday whether we could still hack it after a six months layoff. I am pleased to report that we can. In fact we can't wait to continue.

Conditions: grey with a hint of rain, cool.

Rating: three and half stars. A nice short walk with some interesting sights.
Posted by PH at 21:02 No comments: 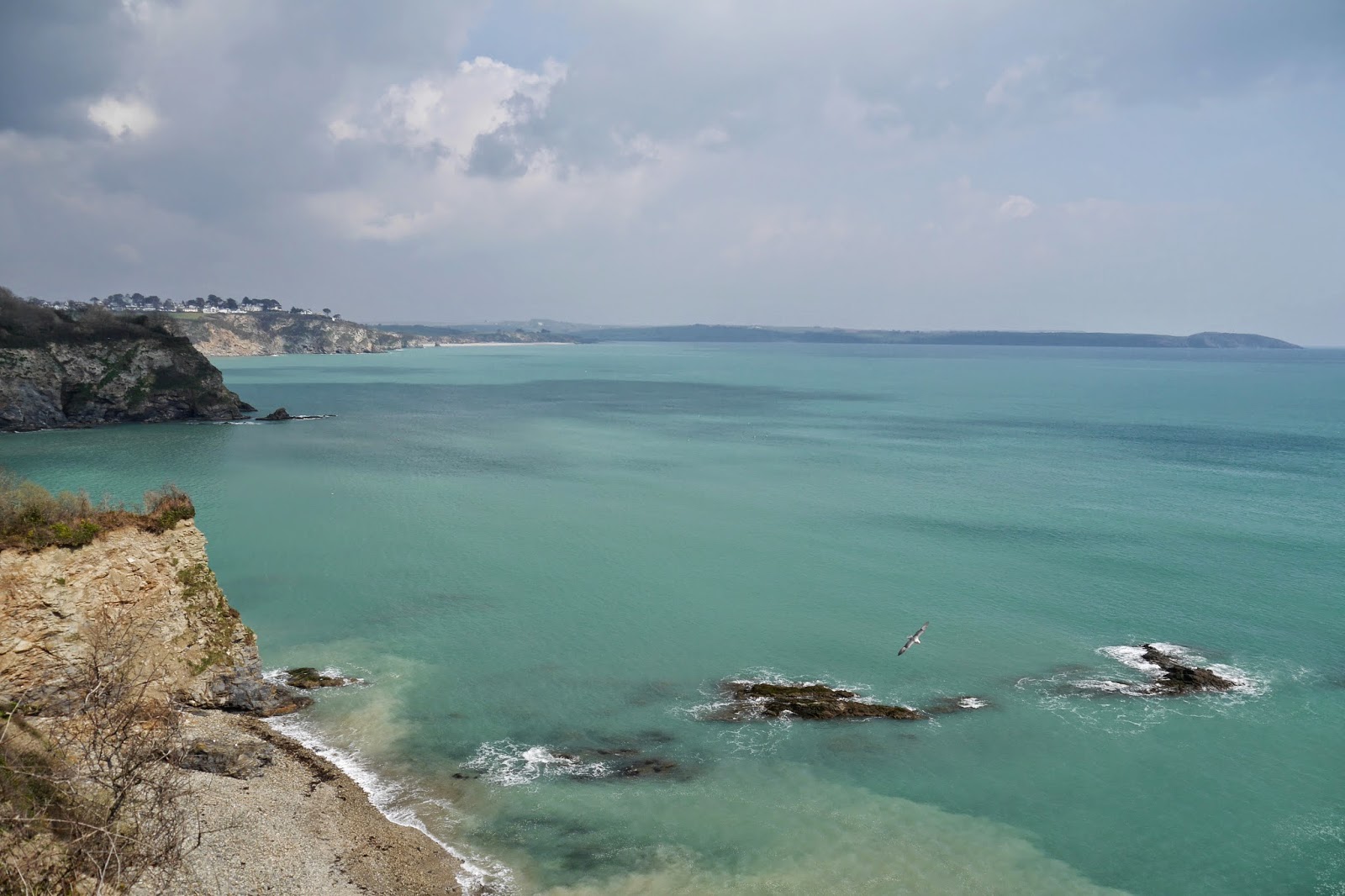 We set out from Lower Porthpean beach, which had struck us as a nice one for kids, and made the inevitable climb to the cliff top. We were very struck by how calm the sea was and by its pale turquoise colour. Out to sea, a couple of fishing boats were moored and around both of them hundreds of cormorants were floating in the sea. Sadly, they were too far out for  a photo

We walked along the cliff top and were surprised by a notice warning of a badger set ahead. It was a helpful warning however because there was a large hole in the middle of the path.

As we approached Black Head we were concerned to see another notice advising of a diversion because of a cliff fall. For the first time ever, this actually made the walk shorter as we were directed slightly inland from the Head itself. Once round the corner the next section of coast stretched out before us.