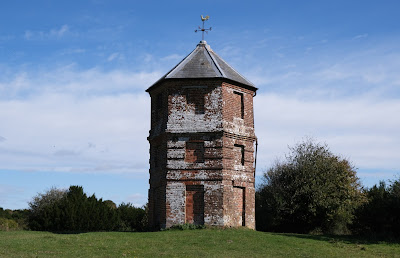 We started today's short walk at The Pepperbox on Pepperbox Hill near Salisbury. The building gets its name from its shape, although the doors and windows have all been bricked up. It is said to be one of England's earliest follies - dating to before the term was invented in the 18th century. It is thought to date from 1606 and be the work of Giles Eyre of Brickworth House, hence the alternate name "Eyre's Folly". Accoring to Wikipedia "The building's original purpose is unknown, though theories include that it was built to provide Eyre with views of Longford Castle or to provide local landowners' wives, including Eyre's wife Jane, a lookout tower to watch the hunt." Wikipedia also floats the idea that it may have been influenced by the Tower of the Winds in Athens.

The walk route required us to head due south and we soon had a fine open view in that direction. Longford House can be seen on the left of this photo and Salisbury Cathedral on the right. The theory that the Pepperbox was designed to provide view of Longford House isn't very convincing! 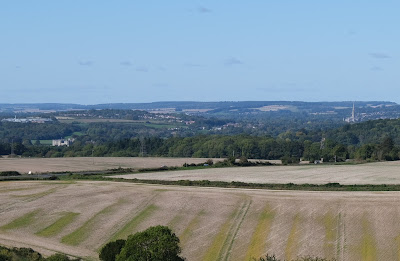 Taking our lives in our hands we crossed the busy A36 and headed up a track to emerge into grassland. We followed a track heading south and soon had a fine view over fields to the right. 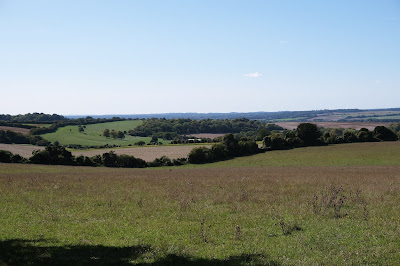 After this we were in woodland with fields to the right. 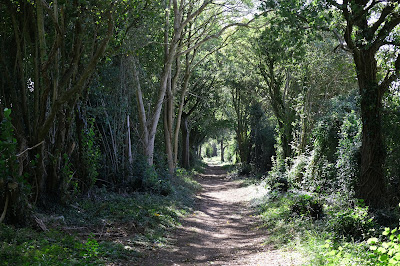 We emerged to turn left into a farm track with a massive field on the left and at the end turned left along a field-edge path, now heading north. We soon had to turn into woodland and only got slightly lost as we negotiated innumerable twists and turns.

We then followed another woodland path, this time in a narrow strip with fields visible on both sides. We were very taken by this large tree. 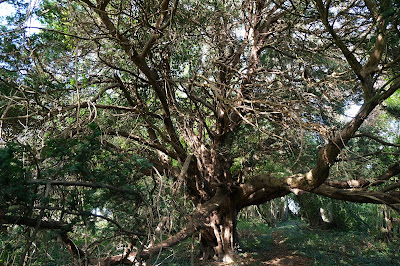 Emerging from the wood we followed the left edge of a large field into more woodland which soon led us back to the A36.

From: Wiltshire: from Salisbury to the Kennet (Jarrold).

Rating: three stars. The Pepperbox and its history were interesting and it was great to be able to see Longford House, albeit in the distance. But the actual walk was a bit disappointing.