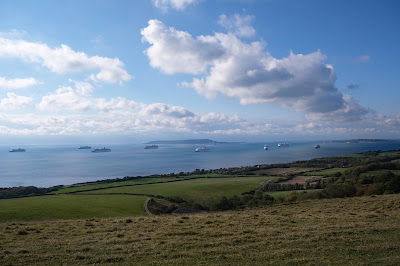 We are down in Poole for the weekend and  we thought it was time to renew our acquaintance with the South West Coast Path. This circular walk starting from the car park high above Ringstead Bay seemed to be just the ticket. The car park offered wonderful views over the bay, where no less than eight cruise ships are currently parked. Portland can be seen behind.

Soon after we started we saw four small waves in front of the liner in the centre of the picture, three in line abreast and a fourth one a few metres behind. We are pretty sure they must have been dolphins, although we were too far away to see any confirmatory evidence. 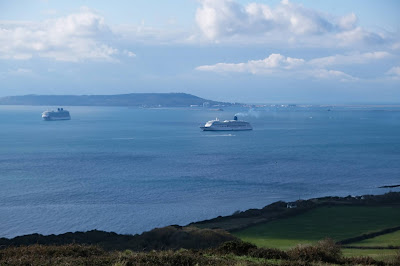 We followed the high path for a while and then turned right to descend and join the Coast Path at Ringstead Village. Soon we passed the wooden chapel of St Catherine's-by-the-Sea. It was built in 1926 by the widow of Dr Linklater, a Prebendary (Canon) of St Paul's Cathedral. The Linklaters had lived in nearby Holworth House. 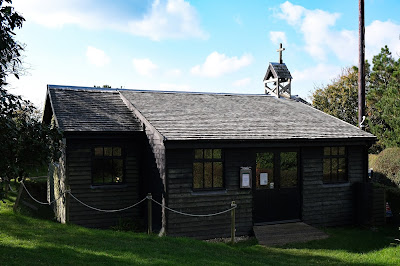 Soon we passed an amusing signpost which I remembered from when we first passed this way in November 2011. The signpost was more vertical then. 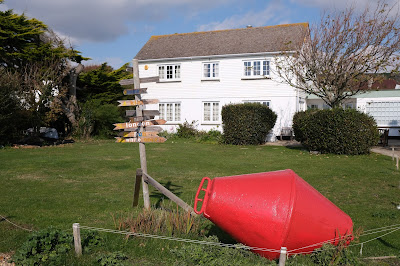 We continued woodland and once the coast was clear passed a war time gun-emplacement - we have seen quite a few gun emplacements and pill-boxes in recent walks. 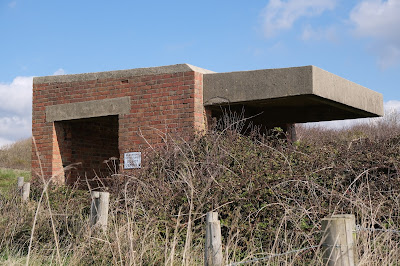 Looking back, we had a fine view of the imposing headland of White Nothe. The building you can see was once Coastguard Cottages, now holidays lets. In the distance, is (I think) St Alban's Head. 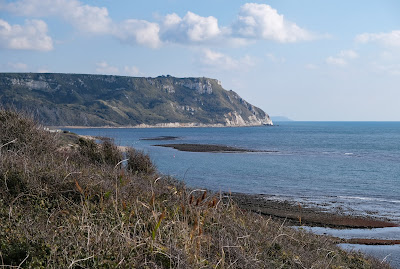 We continued along the grassy cliff and passed the wreck of a ship near the shore. There was a lovely view of Weymouth Bay beyond it. 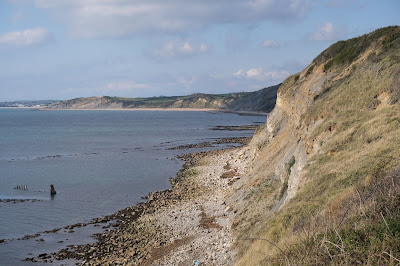 We climbed and then gradually descended towards Osmington Mills, turning right just before the village to climb uphill through a caravan site and then continue on a steepish climb. A level track brought us to the road from Upton which we had followed to get to the car park. Unavoidably, we had to walk about a mile along the narrow lane dodging the passing cars. It wasn't much fun, but we did enjoy the long closed valley which ran along beside the road on the left. 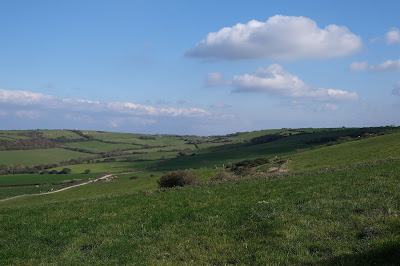