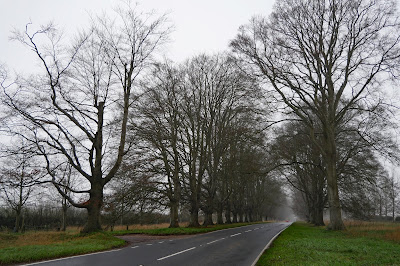 The beech avenue near to Kingston Lacy

We always like to go for a walk on New Year's day and this time we set off from Blandford Lodge, next to Kingston Lacy house. We crossed the road and, not for the first time, admired the avenue of beech trees laid out in 1835 by William Bankes.

The Bankes family had Corfe Castle as its family seat until the Civil War and built Kingston Lacey shortly afterwards, between 1663 and 1665. When Ralph Bankes died in 1981, he left the 16,000 acre estate to the National Trust - it was the largest single gift that it had received.

We followed a path around the side of a house and headed north west by a field-edge path towards  Badbury Rings. It was sadly rather grey and damp. When we reached the Rings however we were pleased to find a new viewpoint which highlighted the concentric circles of earthworks. 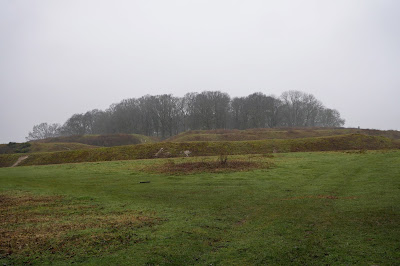 We headed northwards along a straight track passing King Down Farm. To the left was an area of woodland imaginatively called The Oaks. It is unusual in that the old oaks are left to die naturally rather than being cut down. This seemed rather an attractive idea. 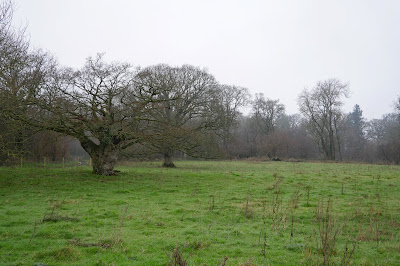 The track became progressively narrower and more muddy but eventually we reached a lane where we turned right. We followed the lane uphill, passing the rather attractive Bradford House, before turning sharp right to begin the return leg. 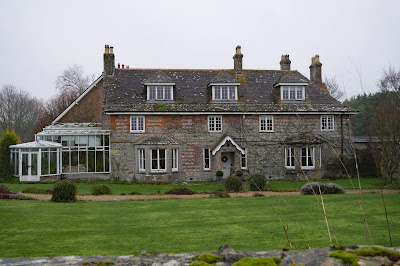 This was the best part of the walk, with lovely views over the rolling hills. Unfortunately it was by now even more overcast and damp, so the vista could be neither be properly appreciated nor photographed. We headed uphill, passing two barrows, and continued along a track that led back to the busy main road.

From: Dorset magazine, October 2013.
Conditions: cold, wet. It was good to get out though.