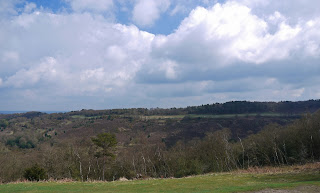 Today's walk was a circumnavigation of the Devil's Punchbowl near Hindhead, which enabled us to see the extraordinary work the National Trust has done to improve the site following the opening in July 2011 of the new tunnel carrying the busy A3 road. The plan was to meet up with our friends Viv and Giles, but Viv's Mum was unwell, so Giles came by himself.

We met up at the car park where the old A3 simply stops and made our way to the first viewpoint over the Devil's Punchbowl, looking north east. The line of the old A3 can be clearly seen in the photo above: it is the horizontal track just below the tree line. The name of this large natural amphitheatre dates back to at least 1768 and there are various legends allegedly accounting for it.

We headed along the west rim and soon descended to the valley bottom, walking north to Highcombe Copse. We were impressed with some careful tree felling which had opened up views across the bottom to the east side. 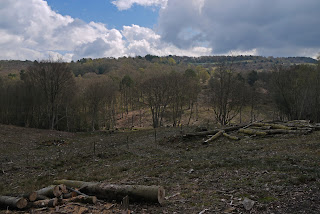 We climbed  a bit and were rewarded with fine views to the north west. The clouds were pretty good too. 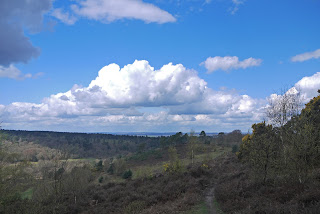 Now we took a zig-zagging route to meet the line of the old A3 on the opposite side of the Punchbowl to where we started. We could see how quite complex landscaping had taken place, presumably using the spoil from the tunnel. 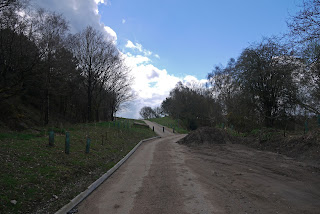 Extensive tree planting was also under way. It is already hard to imagine that this was quite recently a busy main road; soon it will be impossible. 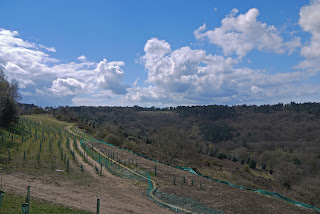 Not long after we reached Gibbet Hill, so named because a gibbet used to stand nearby and the place has a reputation for being haunted. The Celtic Cross was placed here by Sir William Erle of Bramshott Grange in 1851 to dispel the fears of local residents. This side bears the inscription Post Tenebris Lux (Light after darkness). The other faces have similar inscriptions. The nearby OS trig point is 272m above sea level. 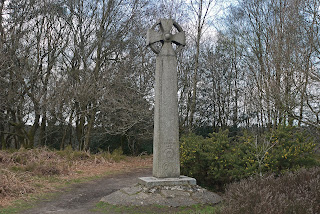 The view to the north west is quite magnificent. The slope on the extreme right of the photo is Leith Hill, the location of an earlier walk. It was also possible to faintly make out, on the left of the horizon, the towers of Canary Wharf. 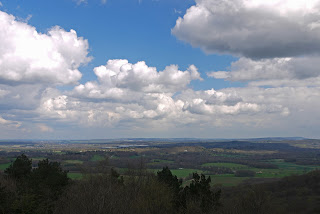 From here we headed back to the car park where we were pleased to see the new sculpture by Jon Edgar. You can make out the Celtic Cross and perhaps the image of Thor, a protagonist in some of the legends. The sculpture is as yet unnamed. 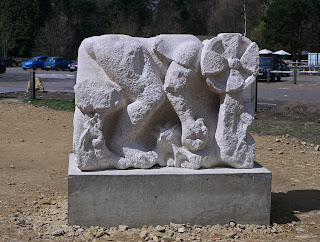 Conditions: bright, but quite cold for much of the way.