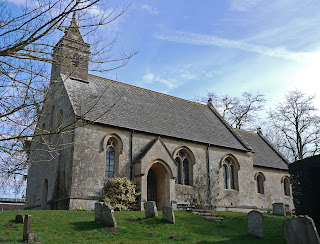 Last month's planned leg of the Oxfordshire Way had to be cancelled because of heavy rain, but today we were able to meet Merv and Pud and  resume the walk at Albury church. It dates from 1830 and is by Thomas Rickman. It is, says Pevsner, "still in the insubstantial Gothic of the 18th century".

We were quickly in open country, with fine open views towards the north east and Brill hill. 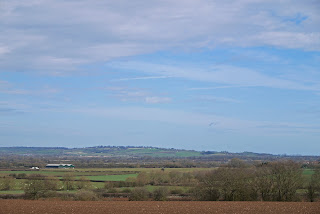 Soon we reached Rycote Park. A great early 16th century house here was burned down in 1745 and what was left was demolished in 1800, except for the turret on the right in the photo and some outbuildings. The present house with its very pleasing stepped gable and diaper brick patterns dates only from the 1920s. 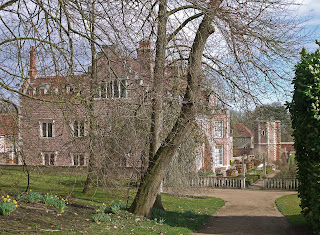 Just next to the house is the chapel of St Michael: built in 1449 and, unusually, unaltered externally since. The 17th century interior fittings are described by Pevsner as "sumptuous", but unfortunately the chapel was locked and we couldn't see them. 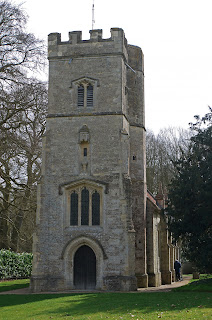 We were delighted by the gargoyles on the east wall. Soon after we entered Old Paddock wood and were struck by the beautiful green of the new grass. Such a change from the brown we have seen for so long. 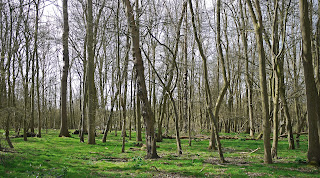 We now crossed a golf course and a massive filed to reach Tetsworth.  There were clear signs of shrubs in the hedgerows beginning to come into leaf. We saw some appealing houses in this straggling village and when were on the outskirts when we noticed a house with some large statues of dogs in the front garden. "The Hound of the Baskervilles" said Pud. Instantly, an absolutely massive dog of an unknown breed rushed out at us barking and jumping up, mercifully quickly followed by its owner. We were a touch shaken, but the owner saw no need to apologise or explain that the dog was only being friendly, or some such. 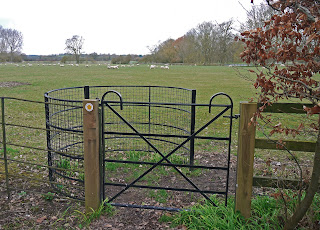 Now we passed Adwell House, 17th century, but almost completely rebuilt in the 19th. We thought the gardens looked lovely. According to Pevsner, its main attraction is a fine staircase of 1820. 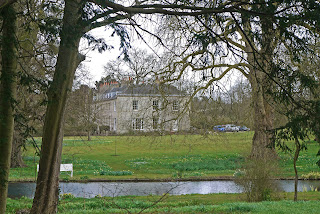 And from there a short section of road brought us Wheatfield, where we had parked. In front of us was the exquisite little church of St Andrew. It is of 14th century origin, but was remodelled in the 18th century, hence the Palladian window in the chancel. Beyond lies Park Farm, the cupola and stable block of which are all that remains of Wheatfield House which, like Rycroft Park,  was destroyed by fire, in this case in 1814. 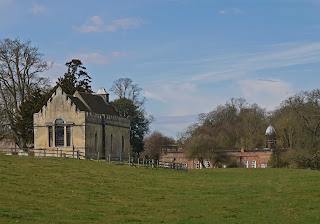 Between the House and the church there was once a street of cottages, but these were felt to spoil the appearance of the park and were demolished at the time the church was remodelled. We encountered the same thing at Milton Abbas in Dorset, but at least there a new model village was built as a replacement.

Conditions: quite bright and sunny, quite warm, maybe 16 degrees.

The most exciting sightings were three butterflies - at last! - a Brimstone, a Small Tortoiseshell and a Peacock. We also saw any amount of kites. Several times there were three or four in view at the same time.

As we passed Rycote Lake, we saw this swan patrolling the lake with his wings in a puffed up position, presumably to deter anyone threatening the nest on the island behind. 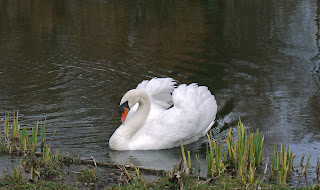