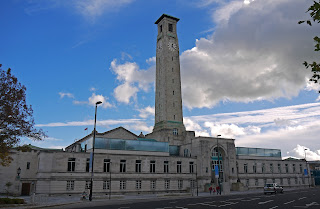 We were en route for Poole and decided to finally do the city walk around Southampton that we had been thinking about for some time. Our only previous visit to the city was to IKEA, but further investigation revealed that there were interesting medieval survivals and a good art gallery.

We parked near the Civic Centre and walked over to find the tourist office to collect a copy of the Jane Austen trail - I had already downloaded a very promising Old Town Walk. The Civic Centre is very obviously a 1930s development: Pevsner describes it as "perhaps the most ambitious civic building erected in the provinces in the inter-war years". The architect was E Berry Webber. The clock tower is very impressive.

We now tried to follow both the Old Town walk and the Jane Austen trail, and started by walked along Above Bar, into a pedestrianised shopping area, to reach Bargate. Pevsner calls it "probably the finest and certainly the most complex town gateway in Britain. It dates from about 1180 and flanking towers were added a hundred years later.  The coexistence of modern shops and ancient buildings - and the street market which made it difficult to fully see the gate, put us mind of a recent visit to Rimini. 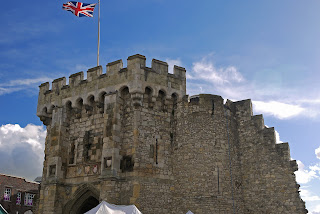 The appearance of the town side of the gate is very different, with 18th and 19th century embellishments, and in the centre an incongruous 1809 statue of George III in Roman dress. 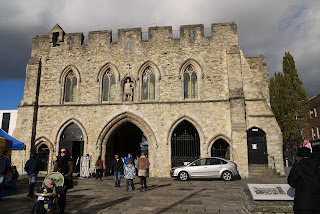 From here we briefly headed east to see our first section of walls, with York Gate. We thought they were surprisingly extensive, but rather hemmed in by the modern buildings behind them. 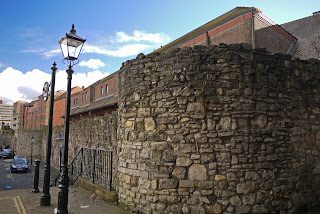 We retraced our steps and passed behind the Bargate again to head west the handsome Arundel Tower on the north west corner of the walls, with the Catchcold Tower beyond it. Nearby is the site of the Dolphin Hotel, where Jane Austen attended balls - now offices with Costa Coffee and Watersons on the ground floor. This rather established a pattern for the JA Trail - the places where she had been were generally no longer in evidence. 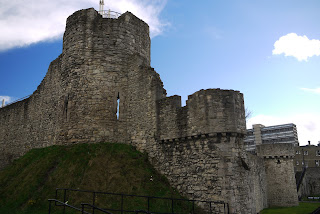 In between the two towers are the well-named Forty Steps, a staircase which in mid-Victorian times led down to the Western Esplanade below. This overlooked what was once the tidal estuary of the river Itchen. It is not quite clear to me when it was filled in.

Further along, the west walls end and the mound where the castle once was is visible, along with traces of the castle vault. This area too has modern housing right up against it. A little further on is a section of wall known as the Arcades.

These were originally quayside warehouses, but after a French raid of 1338, the largest and most dramatic of a long series, King Edward III ordered that they be blocked up.

We went through the central gateway to walk along Blue Anchor Lane to reach St Michael's Square. As you enter this quiet square you pass the impressive Tudor House, now a museum. 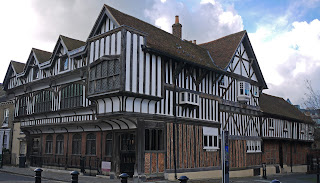 It was mainly built between 1491 and 1518, but incorporates a banqueting hall a century older (Pevsner).

On the other side of the square is St Michael's church, the only remaining medieval parish church in the city. 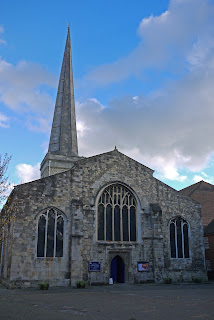 It dates from the time the city was first settled by the Normans, about 1066-76, although only the base of the tower remains of the original church. The airy nave with its slim columns is the result of a 19th century rebuilding.

We returned to the Western Esplanade to reach the Westgate (built after the French Raid of 1338) and have a quick refreshing drink in the delightful Pig in the Wall next door. 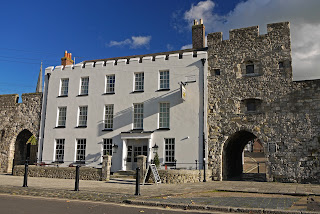 We followed the line of the Town Quay to find the rather pleasing 1913 memorial to the Pilgrim Fathers who departed from the West Quay in the Mayflower and the Speedwell in 1620. "Quite a nice design", says Pevsner, perhaps a bit meanly. 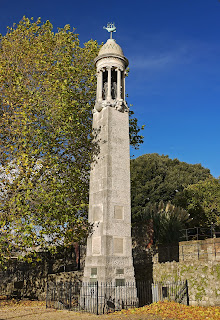 A little further along is the Wool House, an imposing 14th century warehouse. 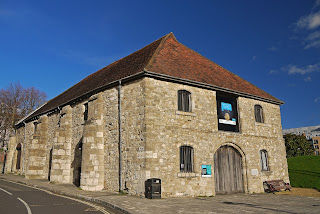 We headed into the town again at this point along French St to see some other non-existent place where Jane Austen was walked. But it did bring us past the Medieval Wine Merchant's House. 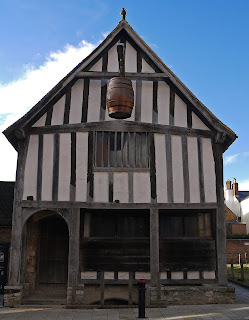 Back to the quay, and the Watergate. We had an excellent lunch in the Spanish-run La Regata tapas bar next door. Afterwards we completed the old town walk with a look at God's House Gate and Tower. The gate is 14th century and the defensive tower early 15th century. 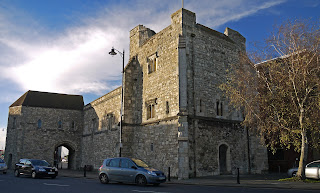 We followed the line of the east walls, of which only traces remain to return to the Bargate and then retraced our steps to the Civic Centre to visit the City Art Gallery. The exterior is a bit forbidding and rather churchy, but inside it is magnificent. 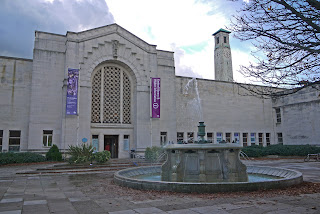 There is a long gallery with a barrel roof and lower side-aisles of the same design. The undersides of the arches are picked out with coloured lines. The overall effect is spacious and visually very stimulating. The paintings are very good too, with the highlight being Burne-Jones's Perseus Series, a set of gouache studies of the legend of Perseus. In the end only four of the studies were painted in oil and they are in a gallery in Stuttgart.