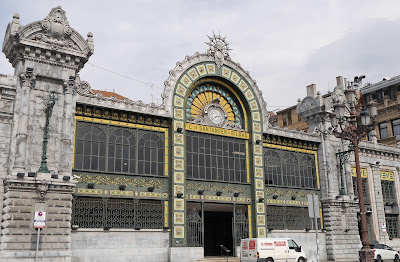 Bilbao isn't especially known for its art nouveau, but as it grew extensively around the turn of the 20th century, I thought it must be worth seeing what I could find. The excellent map from the Tourist Office described one or two buildings as being art nouveau or Modernismo (Spain's equivalent) and some googling revealed more.  I have headed this post with the incredible entrance to the Santander railway station (La Concordia), which was once of the two great highlights of this walk. There are more details later.

We walked from our hotel down past Plaza Moyua to find Casa Montero (1901 by Louis Aladren) on the corner of Gran Via Don Diego Lopez de Haro and Alameda Recalde. We found the sculptural elements rather overwrought, much as we had in Riga's Quiet Centre, but the windows were magnificent. 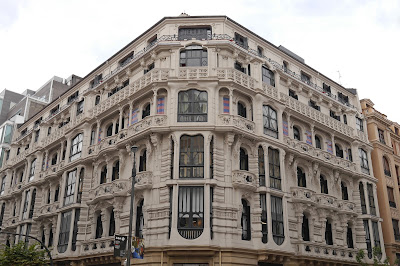 And we enjoyed the little flashes of coloured brick and the spectacular main door (peering through, we could just make out beautiful decoration in the lobby). 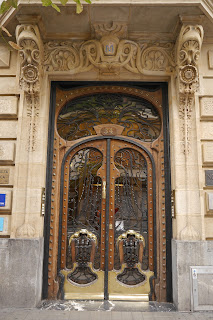 Our next stop was calle Licenziado Poza 2, the Edificio Guridi (1902, by master builder José Bilbao y Lopategui). This is an absolute marvel of art nouveau, either magnificently maintained or, more probably, recently restored. 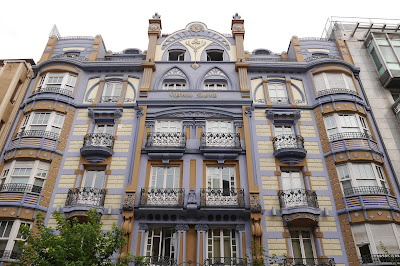 The apex of the façade with the sun and plant motifs is quintessential, but also unique, art nouveau … 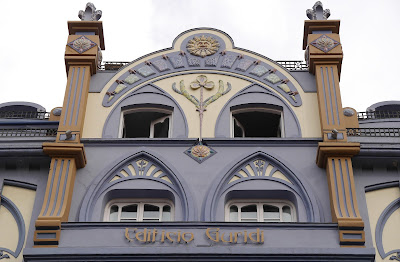 … and flower motifs are repeated in all sorts of innovative ways all over the façade, for example above and around the windows. 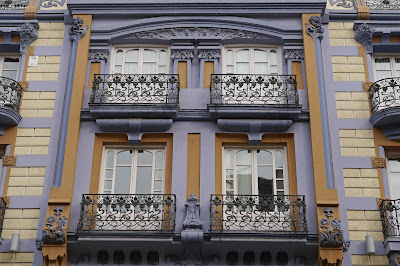 Now down to Plaza Arriquibar to see Azkuna Zentroa. It was built, as Alhondiga Bilbao, in 1909 by Ricardo Bastida and classified as Ecclecticism. There is, I think, enough floral stone carving to qualify as art nouveau, but anyway it is well worth seeing. This massive (in footprint at least - 43,000 square metres) and imposing building was originally a wine warehouse, but in recent times it was converted by the French designer, Philippe Starck, into a cultural and exhibition centre. The facade is almost unaltered. 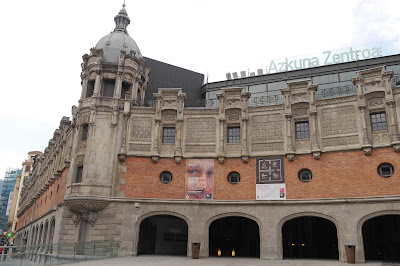 But the inside has been completely remade and is stunning: you walk into a vast area of tall metal columns with brick structures standing on stumpy decorative columns. 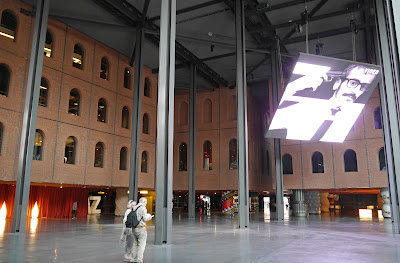 As we wondered round we looked up and suddenly became aware that, yes, there was a swimming pool with a glass floor on one of the upper levels. It was a wonderful sight. 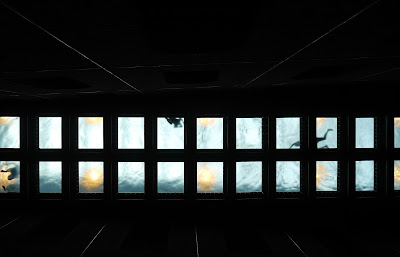 Our next stop was Casa de Viviendas (1902, by Enrique Epalza) on Hurtado de Amezaga on the corner of the junction with Iturrizza. This corner block has the whole corner facade made up of wooden oriel windows – we have seen many houses of this sort of period with these on the main façade, and very attractive they are. 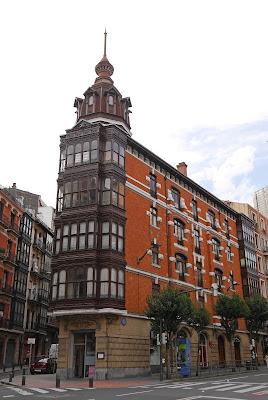 There are nice tiles under the eaves and dragon sculptures on either side of the ground floor windows, but I especially loved the exuberant floral sculpture over the main doorway. 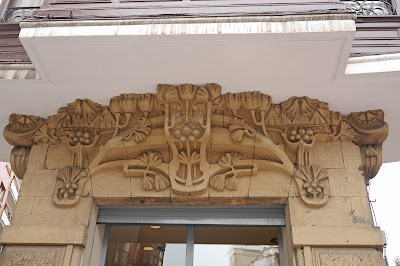 We continued up Hurtado de Amezaga in search of the Teatro Campos Eliseos and stumbled on this entertaining building just before the junction with calle de Bertendona, where the theatre is located. 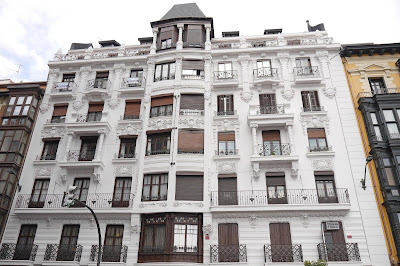 The tiled and wood oriel window was especially pleasing, as was the floral decoration. The overall effect was perhaps a little over the top. 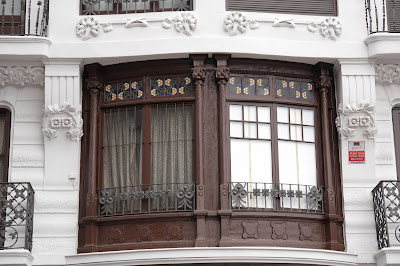 However, the theatre just round the corner (1902, by Alfredo Acebal and J P Darroquy) was completely over the top, with extravagant sculpture around a giant Moorish arch. 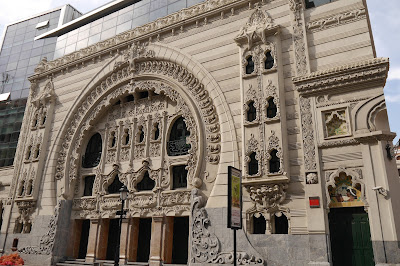 The map classifies this as art nouveau – and in fact it is the only building to be so described – but surely the term Eclecticism was never better applied to a building. It is very eclectic indeed! What I mean is, I hated it.

We returned to Hurtado de Amezaga and continued along it to reach Plaza Circular where we turned right into Navarra. Just before the Arenal bridge to come face to face with the extraordinary entrance to the Santander station (known as Concordia). Like many lines in the Basque country it is a narrow gauge railway.

The station was built in 1902 and seems to have been a collaboration between the engineer Valentin Gorbena and the architect Severino Achucarro, who is credited with the wonderful facade of cast iron and ceremics. There is some slight resemblance to Otto Wagner's contemporary pavilions for the Vienna Metro, although they (Wagner's pavilions) are more delicate. 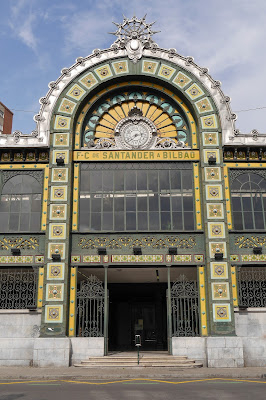 The tiles in the facade to the side of the main entrance are particularly attractive. 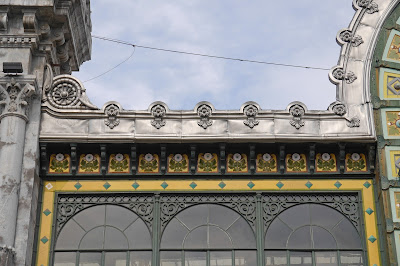 We had now just one more building to see: the Castanos Cultural Centre, located at the foot of the funicular to Artxanda. We crossed Arenal bridge and walked round on the north bank of the river to the Zubizuri (see my post on modern architecture in Bilbao) and followed signs from there.

Rather like Azkuna Zentroa this is an old building which has retained its facade and had a new one inserted inside or in this case behind it. The original building was a public baths by Antiguo Lavadero built in 1910. 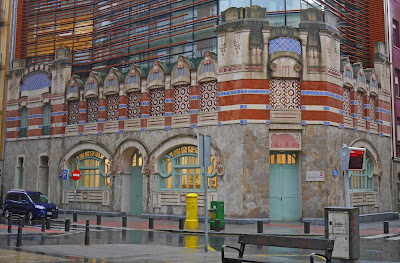 It is distinctive for the dense use of tiles and for the beautiful windows - and note the delicate pink flower motifs at the edges of the door and window surrounds. 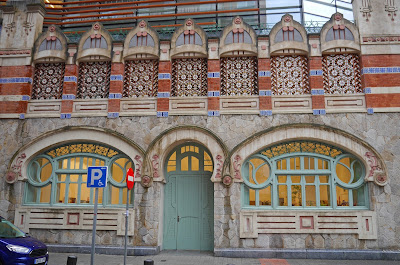 At this point we headed back to our hotel, but the funicular leads to an excellent belvedere with great views over the whole city and is well worth doing on a nice day.

Conditions: mostly cloudy, but quite warm.