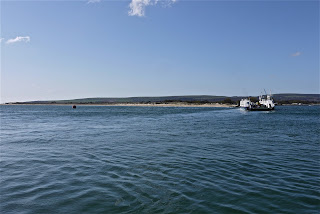 View from Sandbanks across the mouth of Poole Harbour

We found about the existence of the Bournemouth Coast Path quite by accident: we noticed a guide book in the Poole branch of Waterstone's. (More information can be found here.) It seemed like a great idea to do it: it would help us to gain a greater understanding of Bournemouth and, having now walked SW Coast Path from South Haven Point to Lyme Regis, it would mean we would have walked the whole of the Dorset coastline.

The book offers a sort of pre-stage from Swanage to Sandbanks, but as we know that area well we decided to dispense with it and begin at Sandbanks and walk to Bournemouth Pier. We got a cab to Sandbanks (having found to our surprise that there are no buses on Sunday) and looked out across the harbour mouth to Shell Bay, with the Chain Ferry on the right.

You start by walking along Banks Road. And as ever, we wondered about the cachet of living on Sandbanks. The houses on the right have nice sea views, albeit with a public beach in front, but those on the left could be anywhere. After the shops, Shore Cafe and mini-roundabout, there are houses only on the right and to the left is the shallow expanse of Whitley Lake, popular with windsurfers and kite surfers. 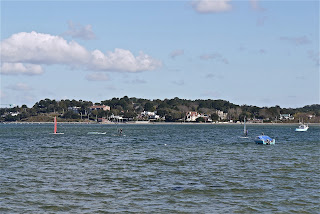 Just past the Sandbanks Hotel you turn right into Shore Road and get the first view of the beach at Poole Head. There is a fine view to the right of the length of Sandbanks Beach and then round to Old Harry rocks. 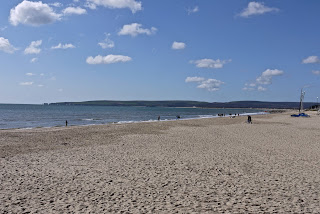 While to the left, there is the long sweep of beach that stretches through Bournemouth to Hengistbury Head (out of shot). 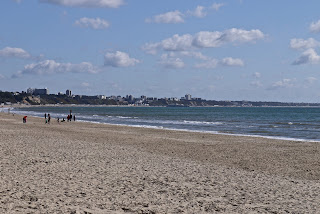 You start out along the promenade, but quite soon turn left up Flaghead Chine, the first of no less than seven chines encountered on this walk. So what exactly is a chine? Wikipedia has a succinct answer: "a steep-sided river valley where the river flows through coastal cliffs to the sea. Typically these are soft eroding cliffs such as sandstone or clays."

At the head of the chine, a couple of roads of rather plush houses lead to the clifftop, with fine views over beaches and coastline, with the Isle of Wight also very clear. Now you go further inland along Canford Cliffs Chine to reach the main road through the village and then turn to come back to the cliff at Pinecliff Gardens.

The walk book says that the coast here was thought to stand comparison with the French Riviera. This carefully constructed photo provides support to that idea. 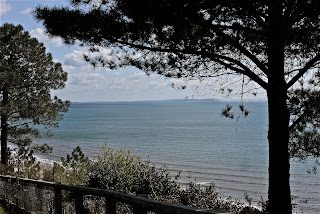 The route now descends and offers fine views of the beach, with newish-looking groynes and Hengistbury Head clearly visible in the distance. 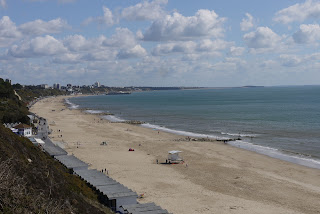 You reach the substantial Branksome Chine and then follow the promenade for a while to turn into Branksome Dene Chine. This had the most attractive beach huts so far and the eroding sandstone cliffs mentioned in Wikipedia 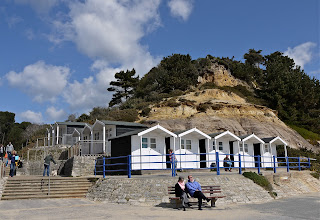 After steep steps out of the chine, you cross the unmarked Poole-Bournemouth border and follow roads around Zetland Court (once the seaside home of Lord Wimborne, now a residential home) to reach the suspension bridge over Alum Chine. 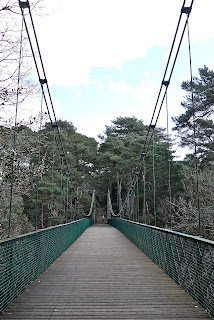 This was mercifully much more solid that we one we recently crossed near Franz Josef Glacier in New Zealand, but still wobbled a little towards the end.

You now stay on the road to pass the Tropical Garden planted in the 1920s and the road bridge over Middle Chine, far below. You cross Durley Chine by going down and then up steps and emerge onto the West Cliff, where there is a fine view towards the Pier, with Hengistbury Head and the Isle of Wight behind. 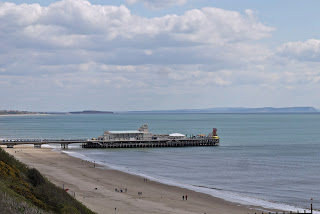 You now descend to the pier. Thereafter it becomes clear that the green Gardens which lie inland of it, with the tiny River Bourne running through, are in fact Bournemouth Chine.

Conditions: generally sunny, but there was a cold wind.

We had expected to spend much more time walking along the promenade, but the trips inland helped us to fully comprehend the meaning of the Chines and to gain a much better feel for the geography of Poole and Bournemouth. We were staggered to discover just how far Poole stretches to the east.

Apart from continuing this walk eastwards, I have it in mind to design a city walk around Bournemouth to try to explore its Victorian heritage.
Posted by PH at 21:20