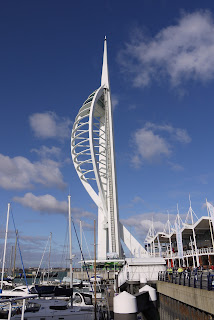 We met our friends Viv and Giles for this city walk around Portsmouth. Giles had gone so far as to do a test-walk beforehand, which was way above the call of duty.

We started at the Spinnaker Tower and began by taking the lift to its various viewing platforms. The tower is 170m high and was originally conceived as a "Millenium" tower when funding was approved in 1995. It did not in fact open until 2005, but it does provide a striking landmark on the redeveloped waterfront.

Our first view from the viewing deck was over the historic dockyard, with HMS Warrior (launched 1860, Britain's first iron-hulled, armoured warship) in the foreground and new Type 45 destroyer in the background. The bluish tint is the effect of shooting through glass. 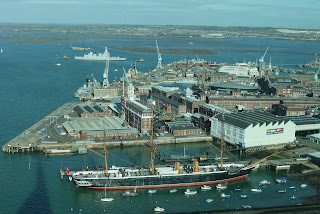 Below, is another view of the unknown destroyer leaving the harbour mouth. 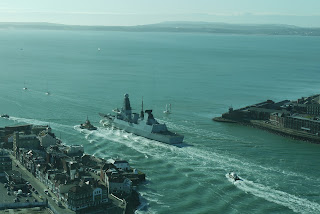 We walked along the waterfront past an impressive array of bars and eateries and soon picked up the Millenium Trail, quickly encountering one of the former naval buildings that Portsmouth is famous for. This was the Vulcan Building, an elegantly simple Georgian construction, built in 1814 as a naval storehouse. It has a handsome slightly projecting pediment, a clock tower, and wings coming forward on either side. The right hand wing houses a small art gallery, the Aspex Gallery. 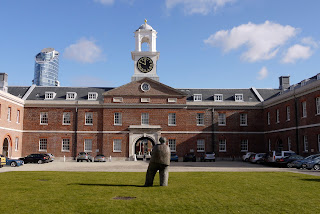 Soon we came to the curved waterway known as The Camber which houses the old harbour. The Bridge pub stands in splendid isolation. 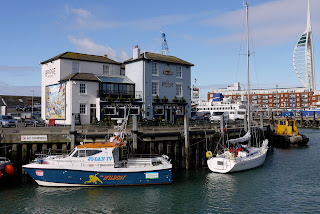 We merged into Broad St and were delighted with this arch, with its painted capitals and precise location recorded in the arch. 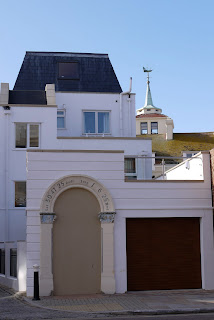 We headed right to reach the Point, which is clearly the best place to view the Spinnaker Tower. 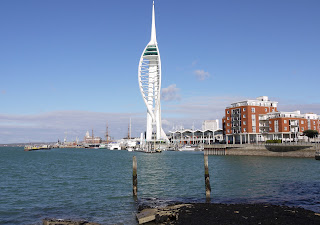 Next we walked along the picturesque West St ... 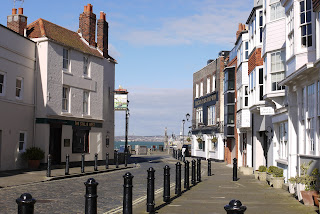 ... to emerge by the Round Tower, one of a pair which faced each other across the harbour mouth. Pevsner notes that the ground storey probably dates from Henry VIII's reign. 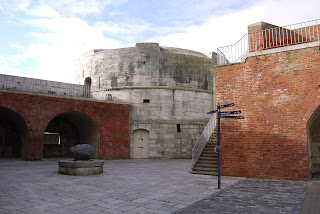 We walked past further fortifications including the equally imaginatively named Square Tower, originally built in 1494,  to emerge, via an area of amusements and other traditional seaside stuff, onto Clarence Esplanade, laid out in 1847-51. We passed the small hoverport and walked as far as the Royal Naval War Memorial, 1920-4, designed by the Scottish architect Sir Robert Lorimer. The memorial is the handsome column in the photo; a Second World War memorial stands to the left. 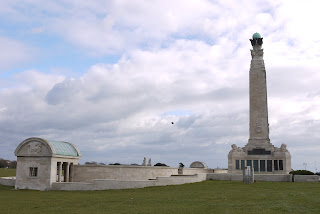 We walked back along the Esplanade, this time noting a wonderful shelter ... 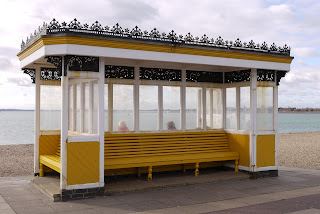 ... and, turning our eyes inland, focused on the Royal Garrison church. 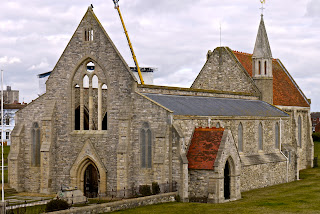 It was originally the church of the Hospital of St John and St Nicholas, founded in about 1212 to accommodate travellers and was under the control of Southwick Priory. After the dissolution of the monasteries it became a military store and then a residence, and was restored as a church by GE Street in 1866. The nave roof was destroyed by a wartime bomb. According to Pevsner, "both as a basically medieval building and as a piece of Street restoration the church is first-rate".

Now we headed towards the Cathedral. We admired this lovely group of 17th century houses with their Dutch gables ... 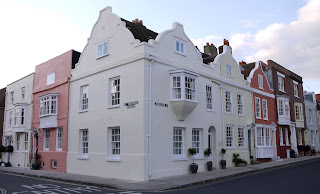 ... and then entered the Cathedral from the north side, into the most modern part. The Cathedral dates from 1188, but the west end is 20th century and the west front was not completed until 1991. It seems to have echoes of French cathedrals such as that at Albi, while the towers resemble those of the Tower of London. The nave is light and spacious, although not very long, and has the feel of a Wren church. 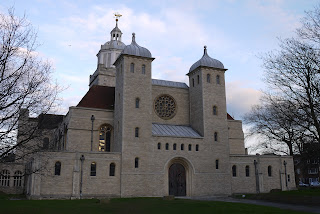 The older parts of the church are the medieval choir and transepts, and the 17th century nave and main tower. So effectively there are two discrete sections of nave. It is all a bit of a hotch potch, but it sort of works.

Conditions: quite bright and sunny

One thing which makes these walks so much fun is that we usually develop a running joke. This time we had all just seen Steve McQueen's excellent, but in some ways gruelling, film Shame. In the film you do see a lot of that fine actor Michael Fassbender. Fassbender became the basis of today's running joke. I won't say more.
Posted by PH at 19:27