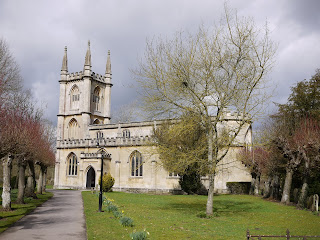 We started this Sunday walk at Hungerford railway station, walked down to and across the High St and along a path to a quiet grassy square with the rather pleasing Croft Hall on the right. 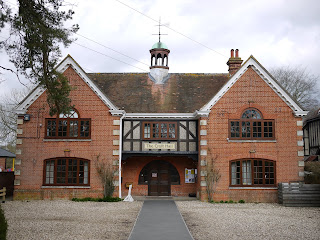 A bit further on you come to St Lawrence's church of 1816. Pevsner calls it "large and uninspired", but this is harsh. It is well-proportioned in the style of a Cotswold wool church like those at Fairford or Bibury and has a most unusual apse end.

From here you walk under a railway bridge and leave the town by walking along Smitham Bridge Rd. After a while you turn left along a footpath and enter open country, walking across fields and through a copse to reach Standen Manor. 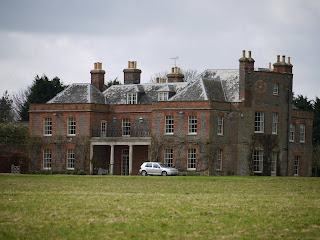 The Manor, a handsome building, dates from the early 18th century. From the front it has classic Georgian proportions, but from an angle, the unusual side of the right wing becomes apparent - seemingly a later addition.

Now the route heads east, with wide open views towards the North Hampshire Downs to the south and only a few small villages in between. The view back toward Hungerford is also quite appealing. 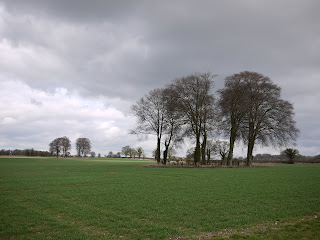 Reaching Inkpen Road you head back towards Hungerford, joining a path across fields at Sanham Green. We saw a kite circling not far above us. This path reaches the outskirts of the town and a footpath takes you to the top of the High St. Just for a moment the view evokes Burford and other Georgian market towns built mainly around one long street. 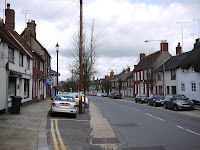 From: Walks in the Kennet Valley and Beyond (West Berks Ramblers).


Rating: three stars. Expanded our knowledge of Hungerford, but the inevitable price of starting at the railway station was walking through some drab parts of the town.


Flowers of the day

For most of the walk we were feeling rather disappointed, with only a few wild daffodils in sight. Why were there no Celandines like we saw last week in Llangybi? However when we reached the hamlet of Sanham Green we saw some Celandines at last and a little mixed clump of Common Chickweed and Common Field Speedwell. 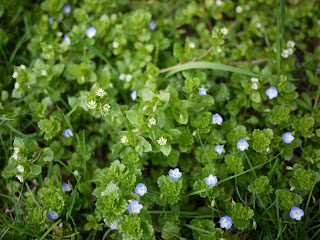 Winterbourne Manor? My grandfather worked there in 1911. Is there a photo I can use in my family research?

I lived there as a child, happy memories